The launch of AB InBev’s non-alcoholic beer Corona Sunbrew 0.0% has provoked beer industry commentators to respond with their thoughts. 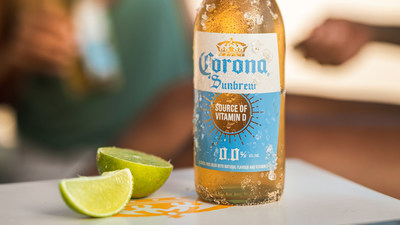 The beer in question, created by the drinks giant that also brings brands such as Stella Artois and Budweiser to market, contains 30% of the daily value of Vitamin D per 330ml and uses the marketing catch line: “Sunshine, Anytime”.

However, experts and commentators in the beer industry take another view, highlighting that for all this talk of innovation in beer, the beer itself is not regarded as a quality product for its taste, only as a vehicle for marketing trends to consumers.

Award-winning beer writer Adrian Tierney-Jones agreed and stated: : “They (AB InBev) have lost complete sight of what a beer is – the brand is crucial but so is some semblance of taste, even Harp and Heineken ads referred slightly to the taste. This seems Orwellian in that peace is war and a modified beverage is beer. The thing about people wanting to look after their health is that they mainly want others to look after them, otherwise they’d be going looking for other beverages, taking responsibility with exercise, eating well and taking supplements. But this kind of beverage is Nanny taking them by the hand and saying: ‘Everything will be ok if you drink this’.”

Tierney-Jones added: “It seems to play to people’s gullibility and also the lie we tell ourselves that something is good for us. A bit like meatless burgers that bleed or milk that has never been in a cow. The decadence of too much choice, the softness of rampant and continual consumerism and the desire for marketing and R&D departments to prove their worth. It’s baby food for adults and the continual infantilism of life for ‘Gen-whatever-is-the-latest’.”

Corona Sunbrew 0.0% was purportedly developed from Corona Extra by extracting the alcohol and then blending the non-alcoholic beer with Vitamin D and “natural flavours” to reach the final recipe.

Beer Writer of the Year and award-winning novelist Pete Brown said: “I think as a proposition it sounds confused – a shopping list rather than a beer. It’s all ‘on trend’ for what ‘millennials’ want but you are pushing against the fact that most people still moderate beer consumption to get healthier – think of the craft beer youngsters who are flexitarian, run half-marathons, go to the gym every day then eat one of those obscene burgers that’s 1000 calories plus. You couldn’t sell them a burger that looks and tastes like that but only had half the fat and has had extra calcium pumped into it. That’s not how people work. AF beer as a category shows you the way. No one was interested in it, for decades, until people came along and said: ‘Here’s beer that tastes just as good but has no alcohol. We’re not expecting you to drink it all the time but it might be handy every once in a while’.”

According to Brown, the issue with brands trying to hit all trends in one product – wellness, no-alcohol as well as nature and the outdoors – is that people don’t seek all things in one item, instead they seek variation. It makes them feel in control of their lives.

Brown explained: “We’re all portfolio drinkers and portfolios are ever-widening (a problem for any brand – people are drinking less overall, and spreading their shrinking consumption across an ever broader number of different drinks). No one expects one beer or brand to do everything.”

Corona Sunbrew 0.0% will first launch in Canada during its darkest season which AB InBev has said it hopes will propel the brand intially before it launches into the UK later this year followed by key markets across the rest of Europe, South America, and Asia.

AB InBev will support the launch with a creative campaign that uses appealing visuals from a beach in Costa Rica.