The UK’s best independent breweries, as rated by the public, have been revealed in new research from South Western Railway. 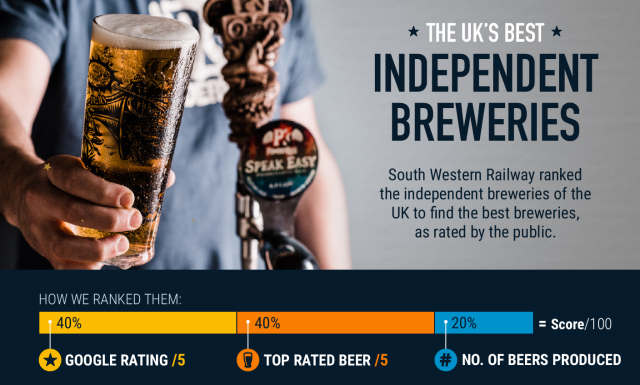 The Cloudwater Brew Company in Manchester has been crowned the best independent brewery in the UK, followed by Stewart Brewing in Loanhead and Kernel Brewery in London, according to the data.

London has been ranked as the best location for independent breweries, with Manchester placing second and Leeds third. The research also revealed that Bristol is home to three of the top 15 best breweries in the UK – more than any other town or city.

With over 2,000 independent breweries in the UK, and over 74,000 Google searches a month for ‘breweries’ alone, it is evident that the UK’s love for local beer continues to grow. South Western Railway ranked each independent brewery based on their average Google review rating, the number of beers the brewery has produced and the rating of the top performing beer, according to (the international website for craft beer enthusiasts).

The top 15 independent breweries in the UK are:

Cloudwater, which took the top spot for being the best independent brewery in the UK, was one of only three to receive top marks for a beer 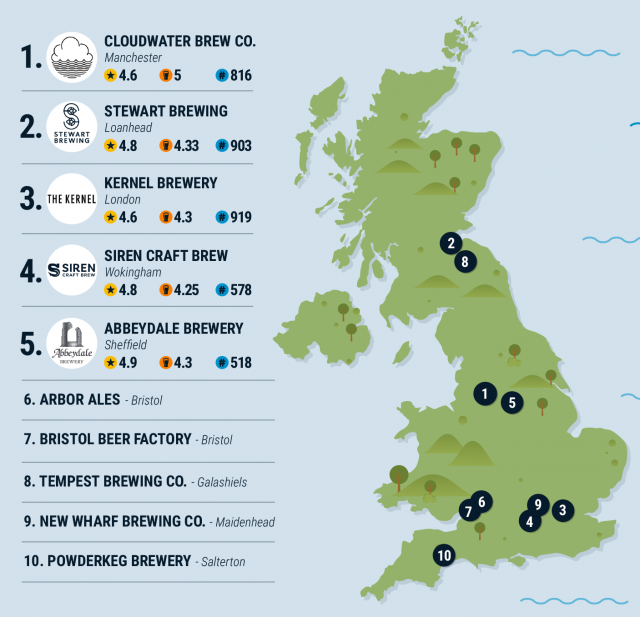 produced and receive 5 out of 5 from the craft beer community (RateBeer). This is just one of the 816 beers listed for the brewer, which shows a wide variety of options.

Loanhead, a small town in Scotland, is home to the second-best independent brewery in the UK. Stewart Brewing has produced more beers than almost all of the breweries in the top 15, with an incredible 900 varieties. What’s more, the independent has an honourable average Google rating of 4.8. Their highest rated beverage on RateBeer is the ‘retired’ Stewart Cauld Reekie (Rhubarb and Custard) which, it would seem, is overdue a comeback. Notably, Stewart Brewing’s head brewer Craig Scotland won Brewer of the Year at the Scottish Beer awards in 2020.

Third place goes to Kernel Brewery in London and with the highest number of beers produced (at 919). Although there is plenty of variety, both Evin O’Riordain’s Kernel Pale Ale Hallertau Blanc Nelson Sauvin Cascade and Export India Porter Zeus Centennial are popular with beer enthusiasts receiving a respectable score of 4.3 on RateBeer.

Rounding out the top five are Siren Craft Brew in Wokingham and Abbeydale Brewery in Sheffield, both with over 500 beers produced, and Google ratings of 4.8 and 4.9 respectively. Their top beers are Siren Pilot Series: Benda’s Plum Renaissance and Beer Works Doctor Morton’s Horse Tonic. The latter received high praise on RateBeer and has been described as being light with hints of lemon and grapefruit.

The Most Popular Types of Beer

On the topic of tastes and flavours, according to the top-rated beers from the top 15 independent breweries, it appears the UK is avid about stout, with six being of stout variety. This includes the New Wharf Vanilla Stout from Maidenhead’s New Wharf Brewing Co., and while this chocolate stout may now be retired, it still managed to receive five out of five on RateBeer during its time of production.

Four from the list of the top 15 are a type of ale, while another three are an IPA, including the Powderkeg Slow Groove which received full marks in its ratings on RateBeer. This IPA from the Powderkeg Brewery in Salteron has been described as tropical and fruity.

By analysing the tasting notes of the top-rated beers, seven are described as smooth, while four include flavours of chocolate and three mention coffee. One beer that includes the latter is the Rudgate Brew No. 15 – Coffee & Data Brown Ale from York’s Rudgate Brewery. Indeed, evidence suggests that the nation’s love of chocolate, coffee and beer have started to merge.

As a nation, it is clear that the UK beer fans like their beers to be robust and full-bodied with the ABV of the top-rated beers averaging around 7%-ABV. The highest percentage on this list is Manchester’s Cloudwater with its A Great Many Breaths – a beer that weighs in with 12.7%. 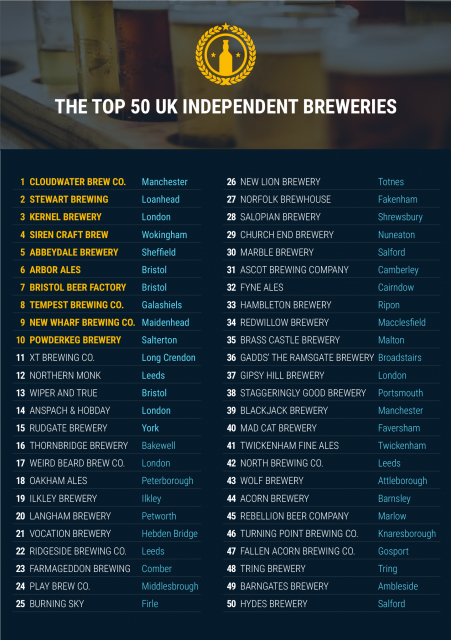 The best locations for independent breweries

Looking at the locations of the UK’s top 15 independent breweries, Bristol populates the list the most, with three of their breweries featured in the top 15. All three have an average Google rating of 4.8 out of five but it is Bristol Beer Factory that has the city’s top-rated beer on RateBeer. Their creamy Stout, Bristol Beer Factory Artemis Series #3 of 4, scores 4.8 out of five – their highest score yet.

Delving into the top locations for breweries overall, the research also revealed that London has taken the crown. With over 2,300 beers produced from 40 breweries, the capital produces more beer and is home to more breweries than anywhere else in the UK.

Although Cloudwater tops the list of the UK’s best breweries, Manchester is in fact the second-best location for beer production in the UK. The “capital of the North” boasts over 1,300 beers produced from six breweries, with an average Google rating of 4.63 out of five. Leeds comes in third with just over 1,000 beers created from eight breweries. The city’s Northern Monk makes the top 15, placing 12th for top independent breweries in the UK.

Paul Bright, head of marketing at South Western Railways said: “As more of us look to shop local and support local businesses, particularly since many are feeling the effects of the national lockdowns, the research is a great step in highlighting the best independent breweries we can taste and explore right here in the UK; even from the comfort of our own homes through online delivery. One of South Western Railway’s key focuses is to support local businesses and with five of the top 15 independent breweries of the UK, being found in the South West region, we’re proud to be showcasing them in our research.”