It’s finally happened: Queen Elizabeth II has given a Royal Warrant to her favourite drink, granting it the same coveted status as brands such as Bollinger and Pimm’s. 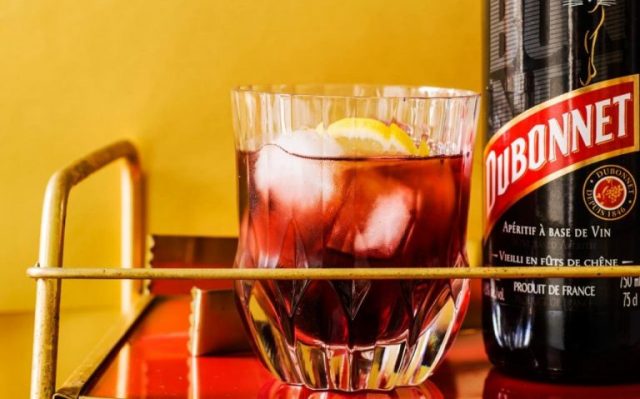 In a story reported by inentertainment.co.uk yesterday, it was revealed that the monarch’s much-loved tipple, Dubonnet, has been awarded the honour, which will be officially conferred on the brand next year.

This means that from 2021, bottles of Dubonnet will be able to feature the words By appointment to HM the Queen, along with an official crest (pictured below).

Although it’s said that the Queen has been advised to give up her preferred drink for health reasons, until recently her daily drop was Dubonnet and gin.

As previously noted by db, based on reporting by The Daily Telegraph’s Andrew Alderson, the Queen is “a creature of habit” and likes a daily “gin and Dubonnet immediately before lunch.”

Apparently, the monarch likes the combination to be one part gin and two parts Dubonnet, with two cubes of ice and a slice of lemon with the pips removed.

Dubonnet is a French, sweet wine-based aperitif, a blend of fortified wine, herbs and spices, including quinine, and was first served in 1846.

The Queen’s mother was also a fan of the drink, mixed with gin in the same manner.

The honour means that Dubonnet will join the ranks of a select few drinks brands with Royal Warrants, which, as you can see by clicking here, includes famous Champagne names such as Bollinger, Lanson and Pol Roger, along with Gordon’s gin, Laphroaig Scotch and Hine Cognac.

According to yesterday’s article, sales of Dubonnet have dropped significantly since their peak of 20 million bottles in the 60s and 70s, with today’s annual figure around 40 times smaller.

Nevertheless, the brand enjoyed something of a comeback during 2020, when worldwide business edged up from 350,000 to 500,000 bottles, which the brand owner, Pernod Ricard, has attributed to lockdown drinking habits and a trend towards lower-alcohol drinks – Dubonnet is 14% abv.

Dubonnet’s largest market is the UK, and the lockdown fillip to sales sees the drink behave like other 70s favourite, Sherry, during the past year.

As db was the first to report in February, after years of relatively lacklustre sales, it’s taken a pandemic to turn around Sherry’s fortunes in the UK, with consumption booming during the lockdowns.

This is believed to have resulted from adult children moving in with their parents as the pandemic took hold, which led to them “sharing a home, and sharing a beverage,” said Martin Skelton, managing director of Gonzalez Byass UK, the distributors of Tio Pepe.

He added, “This means that a lot of people will have tried sherry for the first time in the past year, and they are drinking it more frequently.”

He also said that people of similar age groups in the same household are more likely to be sharing drinks while trying new tastes, including making cocktails at home.

“A lot more people have been making cocktails at home and a lot of mixologists include Sherry in their cocktails,” he said.

Dubonnet is likely to have benefitted from both these changes too, and, in terms of cocktails, aside from the Queen’s preferred combination, the drink is also sometimes used in Negronis, where it’s mixed in equal parts with Campari and gin.

How Sherry has been the UK’s unlikely lockdown winner

What does the Queen really eat and drink?