The growing trend for new and rare bottlings of one-off whiskies has seen a boom in recent years, with some modern bottles surging stratospherically and outstripping the value of older, rarer vintage whiskies. Is this sustainable, or will the bubble burst? 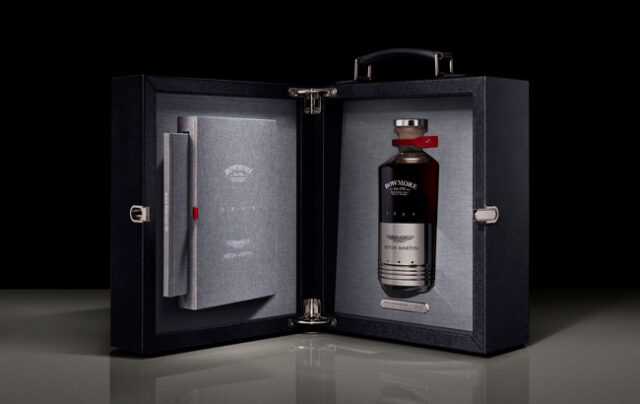 “Since 2015, single malt whisky has transformed into a status symbol, it’s not just seen as a drink to consume,” consultant and whisky broker Mark Littler explains.

Littler, who has recently released  a comprehensive guide to investing in rare bottles of whisky, explains that the bottles are “a signifier of wealth and status”, which is referenced by the huge increase in value.

“It wasn’t until 2018 that a bottle of whisky made over six figures at auction, now the record stands at £1.45 million,” he notes.

This has marked a paradigm and perception shift in the market, with distilleries themselves increasingly targeting collectors rather than drinkers by releasing limited release rebottlings of older vintages and modern non-age statements whiskies packaged in luxurious one-off decanters.

There has also been a proliferation of collaborations with luxury brands – from Macallan’s partnership with luxury crystal decanter manufacturer Lalique or Bentley Motors, Glenturret teaming up with Jaguar to release a 60th anniversary whisky for the Jaguar E-Type, and Bowmore collaborating with Aston Martin on the Bowmore DB5 – further aligning the market with the idea of status and exclusivity.

However the secret of the success lies in the initial accessibility of these bottles, Littler argues. In releasing them via a ballot system for a relatively affordable sum (when compared to old and rare bottles) distillers are attracting younger buyers who are snapping up the allocations as an investment. When these sell out, instant demand is created on the secondary market.

According to Alistair Moncrieff, a partner at Whisky Investment Partners, which specialises in whisky cask investment, it is millennials who are fuelling the growth in whisky casks. The company’s recent research has found that a third of its current customers fall into the millennial age bracket (aged 25-40) with 11% of its investors aged between 25-34 and 17% between the ages of 35-44. It also cited data from Sotheby’s spirits sale last March, in which more than half the bidders (54%) were under the age of 40.

They see this as evidence that millennials are increasingly opting to invest funds in tangible assets, rather than more traditional investment such as funds or stocks – trawling social media for news of limited edition releases and joining whisky clubs, while building their knowledge by visiting whisky bars.

“It is believed this is because millennials are increasingly interested in investing in something they can do their own due diligence on and own outright, as opposed to giving control of their money to a traditional investment house,” he said. “This interest in whisky isn’t just for the taste, either. Whatever the traditional image of a whisky collector might be, the reality is trending younger.”

Littler points out that a similar clientele is fuelling the boom in investment in modern bottles as well as casks.

He points to bottles of the Macallan Concept 3 – a modern no-age statement release in collaboration with graphic artist David Carson in 2020 – which was selling for £750 at Scotch Whisky Auctions in July, despite still being available in travel retail shops for only £117 a bottle.

But this is only the tip of the iceberg. Another no-age statement modern bottling of Macallan,  Macallan Archival Series Folio 1 – was released at £199 in 2015 but by the first half of this year, the average auction price was hovering around £7,750 – a value increase of 4000% in just six years.

“What’s interesting is that we did a report about the Macallan Private Eye, which was released 25 years ago in 1996,” Littler continues “The folio 1 has been sold 710 times at auction since 2015, versus the Private Eye which has sold only 500 times in 25 years – so it’s a much rarer bottle and yet only averaged around £4,470 in the first half of 2021.”

The two are “comparable bottles – no age statement whiskies, but one was released 1996, one in 2015. However the Private Eye has seen 25% growth in 14 years, matching the trend of the market, while the Folio bottles saw 120% growth in the first half of 2021 alone, while the Folio 2 saw even higher growth of 150%.

“It’s been sold less than 100 times, so it is an infinitely rarer bottle, but it is worth almost half the price of the modern Macallan Folio 1,” Littler points out. “It highlights that there’s something greater than the drink that buyers are valuing – it’s not just the liquid.”

This is underlined by the huge difference in price between different bottling of the same liquid. The Springbank 1919 50 year old, which is available on the auction market for just under £40,000,  was rebottled by the distillery in 1980 and one of the rebottled bottles was recently sold at Sotheby’s for £266,000.

“That’s over a quarter of a million pounds difference in price for the same whisky in two [different] glass bottles,” Littler points out.

Littler argues that the whisky market is becoming like the luxury watch market.

“You don’t buy a Patek Phillippe for £30-50,000 to tell the time, it’s the secondary feature,” he says. “Likewise with whisky, it’s not about how good the whisky tastes.”

The flip side, he warns, is that this inflated demand is creating an ‘inflated’ micro-climate on certain bottles that may not be sustainable, because it is being “grossly inflated” by a lack of understanding by investors.

“People see what they want to see – they see the Macallan’s Archival Series Folio 1 has jumped up nearly 4000% and the prices keep rising, but I don’t think many people are in tune with what’s driving that growth,” he says. “People buying the bottles are chasing the returns so [it lasts only] as long as that sector of the market keep chasing…”

“The paradox is that the genuinely rare and old bottles are worth considerably less than their modern counterparts.”

While there is no denying that these bottles are sought after and appeal to collectors, he argues that at those current market values, it’s hard to see how they are a safe financial investment.

“No investment can sustainably jump hundreds of percent year-on-year, there will have to be corrections, especially when pricing relativity has been lost track of – a bit like non-fungible tokens (NFT) in art,” he warns.

“I just don’t know how dramatic that will be.”