On 26 March 1888, during a Christie’s sale in London, someone called ‘P Gordon’ paid the sum of £25 for seven magnums of Perrier-Jouët 1874, setting a world auction record for a Champagne lot that would stand – remarkably – until 1967. 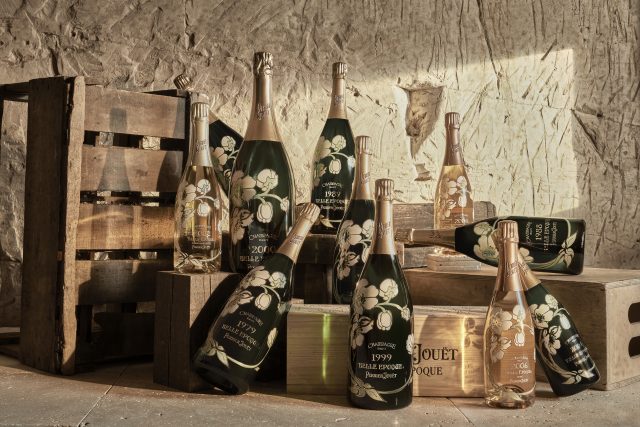 Next week, that same vintage will return to Christie’s in London during the auction house’s wine and spirits sale on 2-3 December, one bottle out of a tranche of vintage cuvées released by Perrier-Jouët as part of the companies’ two-year strategic global partnership.

The lots span vintages from six different decades, including multiple years of Belle Epoque, many in magnum format, among them the famous ‘trilogie’ of 1988-90, as well as two rarely seen vintages of the house’s long-since discontinued Blason de France.

There are post-2000 vintages of Belle Epoque Rosé and Blanc de Blancs, and a 1964 PJ vintage from the year of Belle Epoque’s creation. Many of the lots are linked with what Perrier-Jouët calls “prestigious bespoke experiences” at its maison in Epernay.

Nonetheless, the single bottle from 1874 has captured most of the pre-sale headlines. Apart from the historic link with Christie’s – Perrier-Jouët cellar master Séverine Frerson says there is “a lot of emotion” attached to the wine – it was a fêted vintage at the time, said to have been a favourite of Oscar Wilde, and was blended by Charles Perrier, son of founders Pierre-Nicolas Perrier and Rose Adelaide Jouët.

“Our expectations are high,” says Tim Triptree MW, international director, Christie’s Wine & Spirits, of the forthcoming sale. “With auctions you can never tell how things are going to pan out, but with the rarity of the Champagnes and the prestige of the house, we’re very optimistic.”

The existence and exclusivity of the sale says much about the growing significance of Champagne in fine wine’s secondary market – further illustrated by the news last week from Liv-ex that Champagne prices have risen by 30% over the past year, outperforming all of its other regional indices.

“There seems to be a huge increased interest in Champagne, particularly good Grandes Marques and top vintages,” says Triptree. “We’re certainly seeing more Champagnes coming up for sale and, when they do, they sell very well. Champagne is no longer just for celebrations, but is a serious fine wine – that message is very clear to fine wine collectors.”

Historically, buyers in Europe and the US have driven the market – but, says Triptree, this is changing. “Over the last five years, we’ve seen more interest from Asia – Hong Kong, China and Taiwan. I think it’s become a global market.”

The sale marks the first time that Perrier-Jouët has opened up its Oenothèque – the historic wines, dating back as far as 1825, that populate its Eden cellar – under the supervision of Frerson, who took over as cellar master from Hervé Deschamps just over a year ago.

Like Deschamps before her, Frerson is focused on maintaining the signature house style of Chardonnay-driven energy and finesse, but at the same time isn’t averse to change. “My first job is to continue the same style,” she says. “But I adapt the blend with my own personality.”

So, while Belle Epoque Blanc de Blancs has traditionally been sourced from the historic plots of Bourons-Leroy and Bourons du Midi in Cramant – acquired by Charles Perrier in the 19th century – that won’t necessarily be the case in the future. Partly that’s for practical reasons – Bourons du Midi is currently being replanted – but Frerson adds: “The philosophy is to express the quintessence of Chardonnay, but it’s not necessarily exclusively about the plot … Until now it has been 100% Cramant, but we have access to vineyards at Avize, Chouilly, plus a very small plot at Le Mesnil-sur-Oger.” Whatever the changes, Cramant’s pure chalk soils and the south-facing exposition of the Bourons plots will remain a key feature of the wine in the future.

For the 2012 vintage of Belle Epoque Blanc de Blancs, which is set for imminent release, Frerson has tweaked the liqueur d’expédition, using 100% Chardonnay from Le Mesnil. “It’s to have the highest potential for expression of the wine – the expression of the quintessence of Chardonnay,” she explains. “It’s the last touch.”

If the Blanc de Blancs expression has historically been all about Cramant, the thinking is very different with the core Belle Epoque cuvée. “We have no very special cru,” says Frerson. “It’s because of the ageing potential of this wine, so the cru is not the first point.”

Historically, the blend was 50/50 Chardonnay/Pinot Noir, but from 2000 Deschamps introduced 5% Meunier from Dizy in the Vallée de la Marne. “Hervé wanted to increase the fruity aromas and the smoothness,” says Frerson. “It’s a very special characteristic around orchard fruits.”

And Frerson is open to further evolution in the future. “For me, it depends on the year,” she says. Our job is to give the best of the wine and the best of the year, so the percentage of the blend could be changed.”

Whatever the future evolution of Perrier-Jouët’s Champagnes, much has already changed since that Christie’s auction in 1888. P Gordon’s £25, which secured him or her seven magnums of the 1874 vintage, equates to about £3,500 in today’s money – but it pales into insignificance compared to the £10,000-15,000 that the single 1874 bottle is expected to fetch next week. And it also says a great deal about the changing status of Champagne among fine wine collectors and investors.