Utopian Brewery has unveiled its latest line-up of beers perfect for the colder months, showing that lager is more than a summer drink. 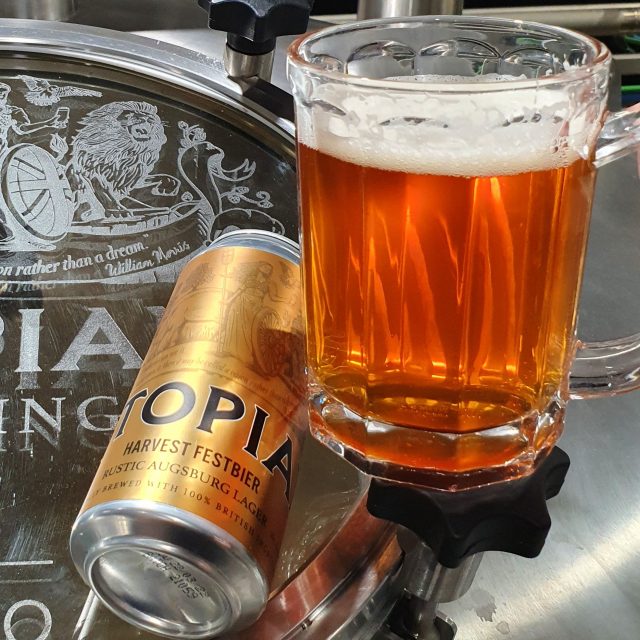 The Devonshire-based brewery showcased the launch of its ‘Harvest Festbier’ at a tasting yesterday revealing that it will go into British pubs, bars, and bottle-shops from this week.

The 5.5%-ABV seasonal beer is an unfiltered lager that has been made from a 19th century Augsburg recipe and uses a pitch of Fuggles hops in the brew.

Utopian Brewery founder and managing director Richard Archer said: “We are delighted with our latest release Harvest Festbier, it’s a celebration of the changing of the seasons, as summer turns to autumn and also a great reminder that lager is not just for the summer. The long 19th century mash regime has developed a beer that is full of lovely deep warming flavours of toffee and caramel but with the easy-drinking character of lager. It doesn’t need to be enjoyed super cold either, which will make it feel equally at home being supped around the pub fire as it would around a barbeque.”

Harvest Festbier will be packaged in 440ml golden cans and will be made available for purchase via the brewery’s online shop.

Additionally, the brewery’s Černé speciální black lager has just been unveiled in 330ml cans, rather than the flagship 440ml. The 5.8%-ABV beer, inspired by the full bodied rich and roasted black lagers of Czechia, has been brewed with a double decoction mash and is being positioned as the “ideal” drink for winter.

“It is also great to have our Vienna Keller back,” said Archer, suggesting that its return to the portfolio is “another reminder of the versatility of lager,” and added:  “I like to think of this deep amber nectar as a ‘crossover beer’. The full malt character, nicely balanced with a light bitterness, make it just as likely to appeal to the special bitter drinker as it is the traditional lager one, as long as they can see past the label of course.”

All Utopian Brewery beers are made using British ingredients, are sustainable and are vegan friendly. The brewery is well known for its decoction mashing methods, a rarity in UK brewing.