Tinta del Pais, Tinta de Toro, Tinto de la Rioja… whatever the regional variations in nomenclature, there’s little doubt that Tempranillo is the quintessential Spanish grape variety. But – as anyone who has worked with it in its guise as Tinta Roriz over the border in Portugal will tell you – this is a cultivar that can change its behaviour quite radically when it encounters different growing conditions.

“If there are two places in Spain where Tempranillo is producing the highest quality and typicity, it is Rioja Alavesa and Ribera del Duero,” says Almudena Alberca MW, technical director at Entrecanales Domecq e Hijos. The company, previously known as Grupo Bodegas Palacio 1894, owns bodegas across Spain, making wine in Rioja with the Glorioso and Cosme Palacio brands, and in Ribera del Duero under the Viña Mayor banner.

The two regions are geographically relatively close – certainly at the eastern end of Ribera del Duero around San Esteban de Gormaz – but the multiple contrasts between them create vastly different styles of Tempranillo in the glass.

Some of these are borne of human decisions, as Alberca acknowledges – the philosophy of the winery and the winemaker. Both Glorioso and Cosme Palacio can be classified as “modern” in terms of Rioja style, but even Glorioso’s Reserva wine has only a touch of American oak, with the precise proportion depending on the vintage. However, the most important differences revolve around climate, terrain, altitude – and the grapes themselves.

“In Rioja the clone is different,” says Alberca. “It has completely different characteristics in each of the places where you grow it.” This is most obviously manifested in the size of the berry, she adds – slightly bigger in Rioja than in Ribera del Duero.

“One of the biggest differences between Rioja and Ribera del Duero is the altitude,” Alberca continues. “When you go to Rioja, you are going to be all the time surrounded by mountains.” The company focuses in particular on the Rioja Alavesa sub-region, where Cosme Palacio is based.

“Alavesa has the highest altitude [up to 750m above sea level] and is also closer to the mountain, and there we are going to have soils richer in calcareous, plus also clay soils. This is very important for quality – limestone or calcareous is a key element to give lots of ageing quality to the wines, retaining high acidity, complexity, aromatics, and an interesting texture on the tannins.”

Another crucial factor here is the looming presence of the Sierra de Cantabria mountain range to the north, providing a natural barrier to protect Alavesa from cool winds and rain blowing in from the Atlantic. The characteristic “cordon” blanket of cloud sitting on the ridge leaves the area with what Alberca describes as more of a Mediterranean than continental climate – although 2021 has been unusually chilly after a decade of T-shirt harvests.

All of these factors come into play when Alberca and her colleagues, including long-time Cosme Palacio winemaker Roberto Rodriguez, make harvest decisions around the various wines: some Rioja Alta grapes from good sites to supplement Alavesa fruit for Glorioso Reserva, with a combination of soils; older Alavesa vineyards with calcareous soils with excellent ageing potential for Cosme Palacio Reserva. 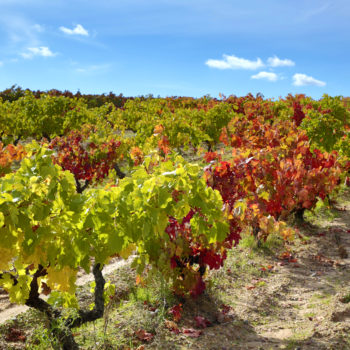 The philosophy is broadly the same in Ribera del Duero, and the soils have some similarities too: calcareous spots are again much sought-after, and there is some clay and sand too – but there are also a lot of stony soils from river deposits, particularly as the Duero broadens in the west of the region, around Quintanilla de Onésimo, close to Viña Mayor’s winery.

Otherwise, though, there are marked differences. Altitude is one: there are vineyards at 1,100m in the east, descending only as far as 900-950m around Burgos and Aranda, and then to 850m near Quintanilla – notably higher than in Rioja. And the climate, in Alberca’s words, is “very strong and extreme”, with a risk of frost early and late in the year, hot summers and a shorter growing season, all of which has quite an impact on the fruit.

Again, all of these aspects inform winemaking choices. A relatively simple wine like Viña Mayor’s Tinto Roble – described by Alberca as “a young wine of the year, softened up with a little bit of oak” – might come from relatively young vineyards (10-14 years old) to target expressive fruit, acidity and less tannin.

But ascend to Viña Mayor’s Reserva level and the thinking shifts. “Here we want more concentration, thicker skins on the grapes, a higher concentration of tannins and more concentration of fruit because the wine is going to be aged for a long time,” says Alberca. Old vineyards are therefore the focus – 60 years old on average, spanning an age range from 40-45 to 80 years.

After 18 months in a mix of French and larger American oak barrels, plus two years in bottle, the Tempranillo in Viña Mayor Reserva offers one more contrast with Rioja, says Alberca: “In Ribera del Duero, you tend to find more forest fruit: red and black fruits. In Rioja, sometimes it goes more to strawberry than forest fruit, although they do share some common characteristics – liquorice, balsamic, herbs.

“But with the reservas, when it comes to the texture and the tannins, you notice how different they are. With Ribera del Duero they are more firm and present than in Rioja, where they have a high concentration, but are smoother and soft in texture.”