The last hospitality project by fashion legend Karl Lagerfeld has opened in Macau, boasting one of the region’s largest collections of Portuguese wine. 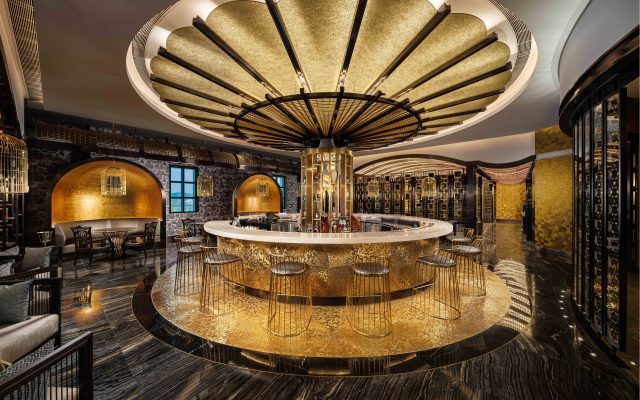 Best known for his contribution to the fashion industry, Karl Lagerfeld launched a hospitality line in 2016, with some of his most famous interior projects including Hôtel de Crillon in Paris and Sofitel So Singapore. On 30 July 2021, Grand Lisboa Palace Resort Macau, the style icon’s last collaborative partner before his death in 2019, unveiled The Karl Lagerfeld hotel tower. The property aims to provide an “immersive journey into the ethos, vision and distinctive aesthetics” of the fashion genius.

As well as rooms and suites, the late Lagerfeld also designed his own F&B outlets, namely the contemporary Portuguese restaurant Mesa (pictured), and the Statement Bar. The interior features a bold blend of contemporary design and oriental inspiration, fusing the designer’s signature style with elements from the East.

Inside the bar, Lagerfeld was inspired by the traditional Chinese birdcage design, as well as chairs with arms that are laced with Chinese fretwork, deftly merging Chinese iconography to complement the resort’s East-meets-West aura. Elsewhere, the LED ceiling in the main dining area displays natural scenery, reminiscent of the windowed ceiling and skylight in Karl Lagerfeld’s studio in Paris.

The bar is captained by an in-house Master Mixologist who has designed a bespoke cocktail menu inspired by Macau’s history and landmarks, such as Saint Paul’s Ruins, A-Ma Temple and Taipa Houses, that pairs with petiscos, small bites to have while drinking.

The venue also offers an extensive Portuguese wine list as it operates in close cooperation with Portuguese wineries including Quinta do Crasto and Quinta do Noval, as well as winemakers and local distributors, and has a Portuguese sommelier as part of the team. The beverage list features one of the largest selections of Portuguese wines in Macau.

Lagerfeld passed away in 2019 and was creative director of Chanel for 36 years.