How is alcohol-free beer really made? We ask the experts

With a growing awareness of what we put in our bodies, and health-consciousness on the rise, low- and no-ABV drinks are becoming more and more in vogue. But when it comes to alcohol-free beer, how is it actually made, and what are the challenges to brewing a really good bev that won’t get you pissed? To find out, we asked some of the biggest names in low- and no-alcohol brewing, to learn the perfect way to make a tee-total tipple. 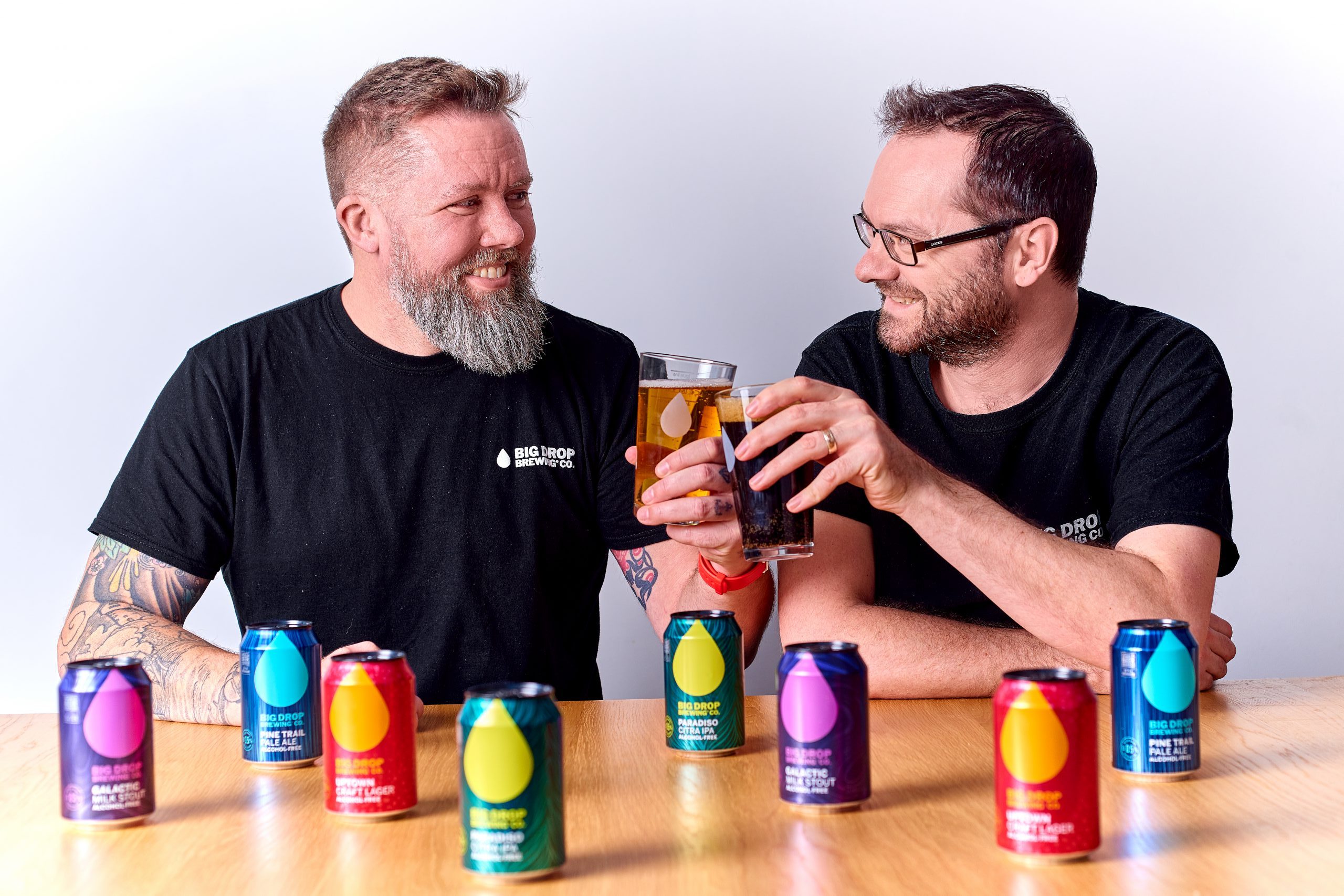 “There are so many different ways that you can do it, but essentially, we split it into two methods: our 0.0s and our 0.5s,” says Becky Kean, founder of Nirvana Brewery.

When Kean’s dad decided to give up drinking in 2016, she was in full support. So much so, that after seeing how few options for alcohol-free alternatives were out there, she left her job at a mentoring foundation for women in business to try it herself.

Joined by her brother in law, Andrew Keresey, in 2018, the pair now run the UK’s only brewery completely dedicated to brewing low- and no-alcohol beers.

But how do they do it? In the ordinary brewing process, sugar from malted barley is broken down by yeast, producing alcohol and waste carbon dioxide. The alcohol is flavoured with hops, botanicals and other flavourings to produce a variety of beers.

With low- and no-alcohol alternatives, however, brewers have to find ways to either eradicate the alcohol from this process, or introduce extra steps to remove the alcohol once the brewing process is complete.

“Still considered alcohol free, 0.5% does give you a lot more flexibility with how you can make it, because you can actually ferment it like a normal beer; you just have to really restrict the alcohol,” Kean explains.

“Obviously 0.0% is a lot more difficult, because you can’t do any fermentation. But for some people 0.0 is still important.”

Making a 0.0% beer, Kean explains, essentially means creating a “blend of the ingredients”, cutting the fermentation process out completely. “With that style you do get a lot more sweetness,” says Kean, “because none of the sugars have been converted to alcohol. It lends itself to a slightly more indulgent beer like a stout or a cask ale.”

When it comes to 0.5% beers, however, the process gets a lot more complicated, with more room for experimentation and a limited amount of fermentation to take place.

“We have to do certain things that really restrict how well the yeast can perform; there are things that we do involving the temperature of the mash, the fermentation, and the strain of yeast which will affect how well that yeast can form alcohol,” Kean explains.

All of these technical and scientific processes can change the taste and texture of an alcohol free beer.

For Rob Fink, co-founder of alcohol-free beer company Big Drop Brewing Co, retaining all elements of a good beer – from aroma to the way it feels in your mouth – is essential when brewing low-ABV alternatives.

“If you want to produce beers which have flavour and aroma, you should brew to strength. And that’s basically what we do. We just brew beer, full stop. It just so happens that the ABV of our beer is always less than 0.5%. And to some extent, I consider our beers simply an extension of the ABV spectrum.”

“I often describe alcohol as a bit like salt; it’s a flavour enhancer,” says Fink. “If you have a beer that doesn’t have alcohol you lose mouthfeel – you’re not getting that lovely rounded feeling in your mouth.” 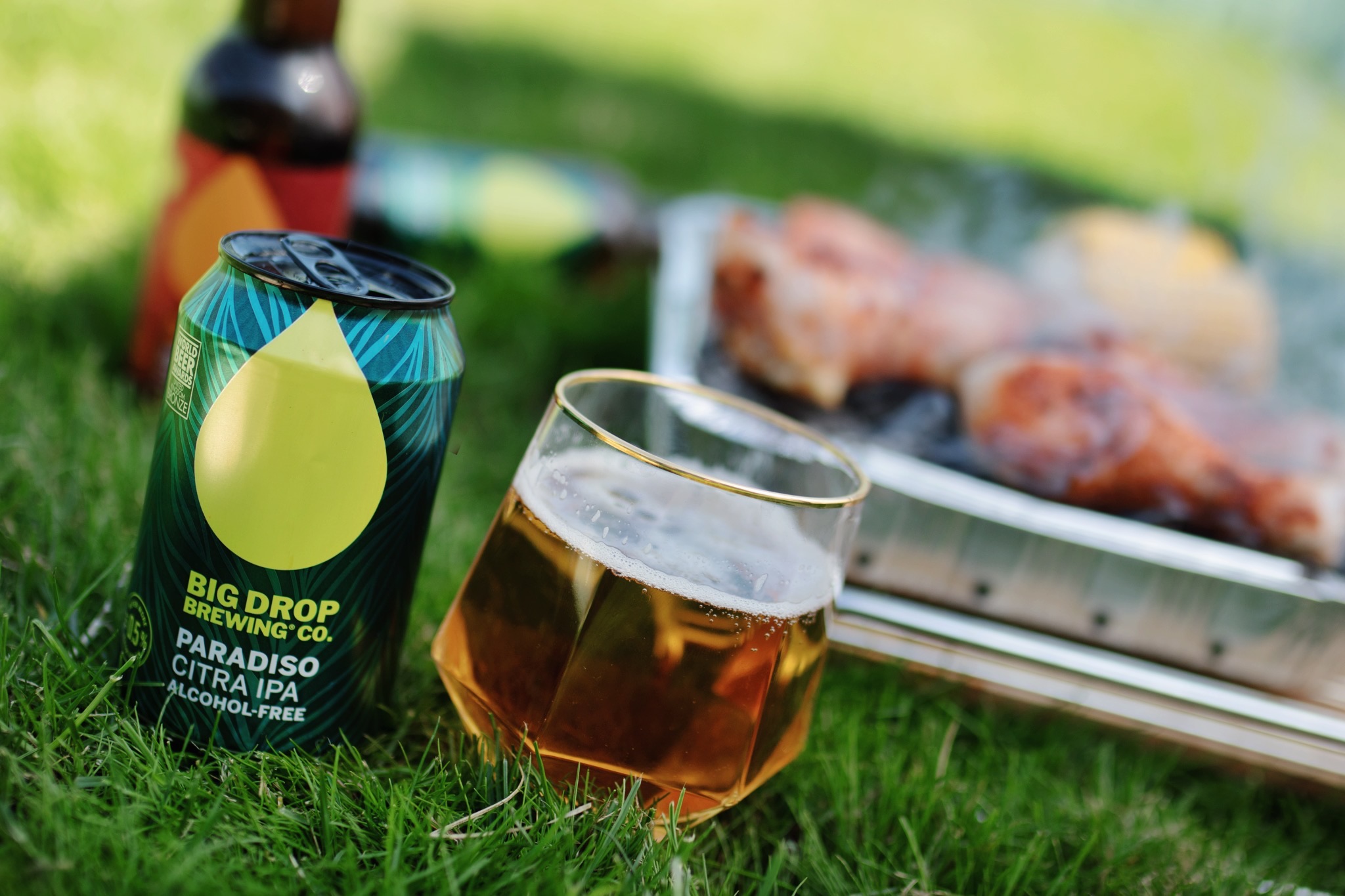 To combat this problem, Big Drop uses a range of different ingredients which help to add that texture back in. From oats and lactose used in some of their recipes, to the addition of maltodextrin – a non-fermentable sugar – Fink is concerned with all aspects of a good brew, not just its flavour.

“We’re also currently experimenting at the moment with glycerin, a vegetable product, that gives you that mouthfeel to allow the flavour to stay in your mouth,” he says.

Limiting fermentation is not the only way to make sure your brew doesn’t leave drinkers reeling the next morning. At Adnams brewery in Suffolk, beermakers have invested in dealcoholising equipment to produce their alcohol-free alternatives.

Adnams’ journey into alcohol-free brewing began back in 2012, brought on by change in legislation which gave alcoholic drinks between 1.2% and 2.8%-ABV a restricted duty rate.

Jonathan Adnams, the company’s chairman, turned to Lithuania for inspiration, having learnt of a fermented soft drink, called Kvass, more popular with the local people than Coca Cola.

“From our experiences with Kvass, and just being brewers, I think what’s really important for us here Adnams is providence,” says Dan Gooderham, Adnams’ head brewer. “I think there are some good breweries out there doing restrictive fermentation – Big Drop does an amazing job. But going back to why we like beer, I think that fermentation process is just so critical.”

According to Gooderham, there are two methods that rely on having a full fermentation before separating the alcohol afterwards: thermal separation and membrane filtration.

After a process of experimentation, and a trip to Germany to see the technologies in action, the brewers at Adnams settled on a membrane filtration method to make their famous low-ABV brew, Ghost Ship 0.5.

“The technology has improved a lot, but historically with the low-alcohol beers that were available in the past, thermal separation was quite rough,” Gooderham adds. “You basically get cooked flavours, which is fine for certain beer styles, but when we were looking at Ghost Ship 0.5, this is quite a hoppy beer. The membrane filtration really preserves all the hop flavour, And we still have that amazing fermentation, which produces all the other secondary flavours into the beer.”

One downside of using alcohol extraction methods is the added cost of equipment. But for larger-scale brewers looking to replicate the taste of well-established and well-liked brews, it is the method which proves best.

“We brew all Stella Artois Alcohol-Free using exactly the same process as standard Stella Artois, but then we remove the alcohol,” says Sam Cernak, Marketing Manager at Stella Artois UK.

“This process is key in order to help us maintain the same taste that consumers love, as the brewing process and the malts, hops and yeast used all lend Stella Artois its unique flavour.”

A global brand with a loyal customer base, Stella Artois also uses natural beer and hop flavours to replicate its original offering. 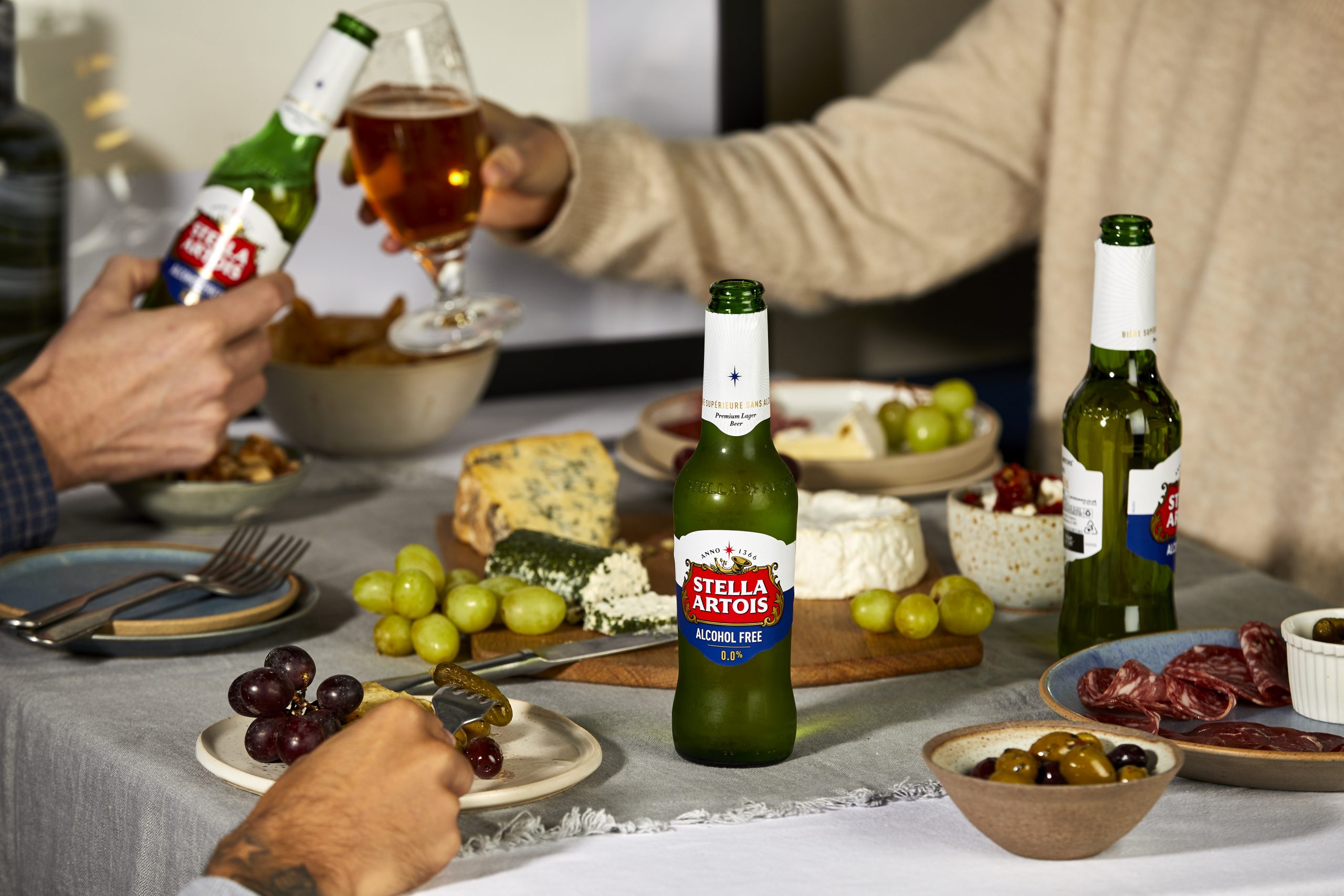 Why would such a popular beer brand – one you are sure to see being sold in most bars and supermarkets across the UK – need to adapt to the alcohol-free trend? The answer is simple: consumer pull.

“From a category side, the alcohol-free category has consistently outperformed the overall beer category, seeing strong growth, mainly driven by bringing in new, primarily younger and more affluent consumers,” Cernak explains. “From a consumer pull side, we had been getting requests from consumers asking for us to launch Stella Artois Alcohol-Free, and bring the taste of the UK’s most loved beer to the category.”

As a result, parent company Budweiser Brewing Group UK&I’s goal is to have 20% of its volumes to be no- or low-alcohol by 2025, expanding into untapped occasions like lunchtime drinking and engaging with younger, more conscientious consumers.

“The calories present in the beer is the second biggest driver of choice in the category (bigger than compared to the beer category as a whole), so this is why we wanted to ensure Stella Artois Alcohol-Free would tick all the boxes – so it’s 60 kcal per bottle,” adds Cernak.

This movement towards more thoughtful drinking patterns has been spurred on by the pandemic. According to the SIBA 2020 Craft Beer Report, the number of people going teetotal continues to rise, with 17% saying they were teetotal in 2020 compared to 16% in the previous year. This rises to 23% among 18-24 year olds, an increase of 6% in the 12 months before.

A YouGov survey by Alcohol Change UK, the charity behind Dry January, also found that four in five (78%) Brits drink more than they want or intend to, and more than one in 10 had taken part in Dry January 2020.

And for one beer-lover in particular, lockdown saw the birth of a new venture.

Hugo Tapp came up with the idea for a low-alcohol, low-calorie alternative as a result of the pandemic, during a period when he had a lot of time on his hands. Working as a freelancer in the drinks trade, the national lockdowns in the UK gave Tapp the time and energy to start experimenting with something of his own. And out of this period came Loah Beer, a low-calorie lime-flavoured lager at 0.5%-ABV.

“I think coupled with the no- and-low movement is a health drive. And so that was a really important element to the planning of the actual product. For me, the top priority for Loah as a product was that it would be low-calorie, low-sugar, gluten-free if we could get it, and vegan,” says Tapp. “The flavour came after, once I could actually be assured that I would get a product that was kind of healthy.”

Tapp uses a limited fermentation method, brewing the ingredients in the same way as a normal beer, before crashing the temperature down to inhibit the yeast’s ability to break down sugars.

Traditionally, this produces beers with a higher sugar content, as the starting ingredients are not being fermented in order to produce the alcohol. So how is Tapp able to brew using this method while sticking to his promise of producing a healthy alternative? 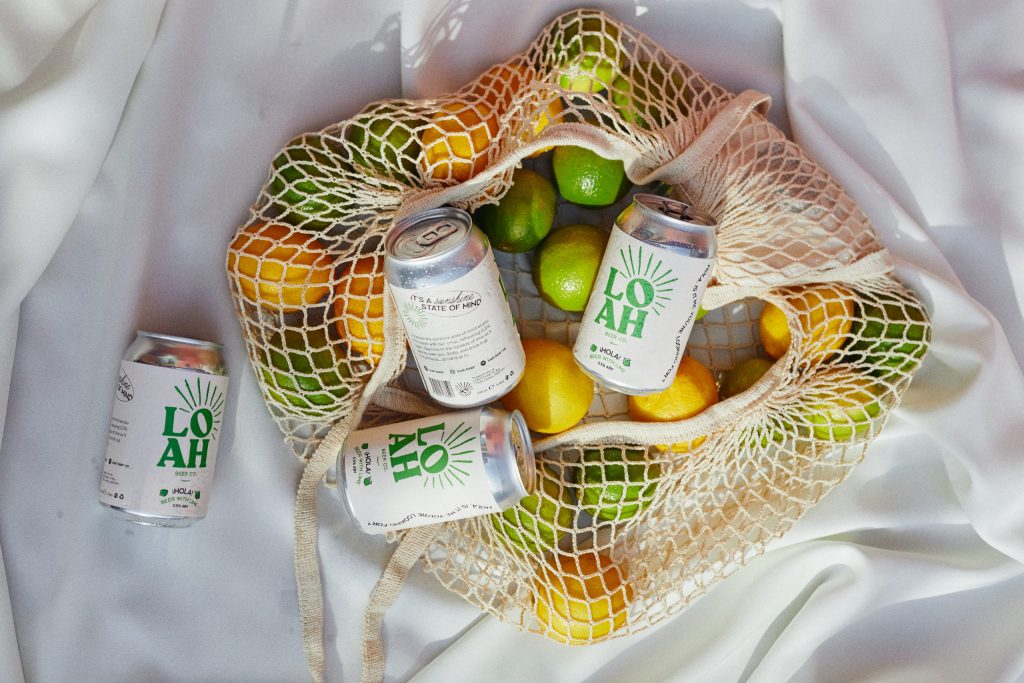 “We use fresh, high quality ingredients, but we don’t actually use a huge amount in terms of volume to go into the brew. We’re quite picky about what we put in there so that it will be low in calories and low in sugar.”

And so far to great success. Tapp sees low- and no-alcohol beers like his own, which is infused with fruit flavours, taking up a new space in the market.

“The lager on its own is delicious, but then we add fruit on purpose so that it attracts this new audience and allows it to sit in a different place,” he says.

“I’d quite like it to be sold in sandwich shops, as well as in pubs. I like it sitting somewhere in between. I think it’s kind of interesting to see where it goes.”