The Scottish town of Huntly hosted the unveiling of a world-record-breaking sized bottle of Scotch, containing 311 litres of Macallan single malt. 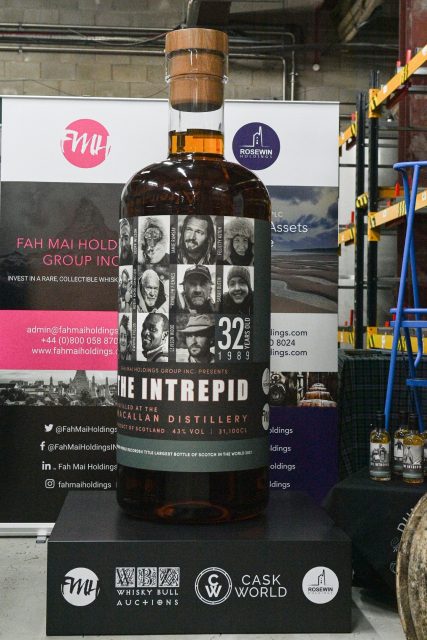 The successful attempt beat the previously held record, established by The Famous Grouse Experience in 2012, by a landslide 83 litres.

The whisky firms acquired two sister casks of 32-year-old Macallan single malt whisky, which were married together by the team at Duncan Taylor Scotch Whisky distillery. The purpose was to raise money for a number of chosen charities.

The 1.8m (five foot nine inches) tall bottle took an hour to fill and holds 311 litres. The remaining 32-year-old Macallan whisky, left over from the casks, have been used to produce a limited-edition bottling run.

Only 14 sets of ‘The Intrepid’ will go on general sale, with each 12-bottle set consisting of a replica of the record-winning bottle featuring the faces of different famous explorers, athletes and adventurers.

Fah Mai Holdings Group and Rosewin Holdings owners Louis Haseman and Daniel Monk summed up the project, saying: “Eleven of the most fearless and adventurous people to walk the earth, featured on the world’s largest bottle of whisky, containing some of the most expensive single malt available, and bottled by one of the best independent Scotch bottling companies.”

The record-breaking whisky will now travel to a London auction house, where it will be auctioned later in the year.

It is thought the bottle may end up breaking a second world record for the highest price for a bottle of whisky ever purchased.

“To put it into perspective, a single 70cl bottle of original 30-year-old Macallan Oak sells for £4-5k and a similar independent bottling fetches £3k plus. What we have here in our mega bottle alone is around 444 of those. We’ll leave you to do the maths…” said Haseman and Monk.