Virgin Atlantic has launched a social drinking space named ‘The Booth’ on its newest A350 aircraft. 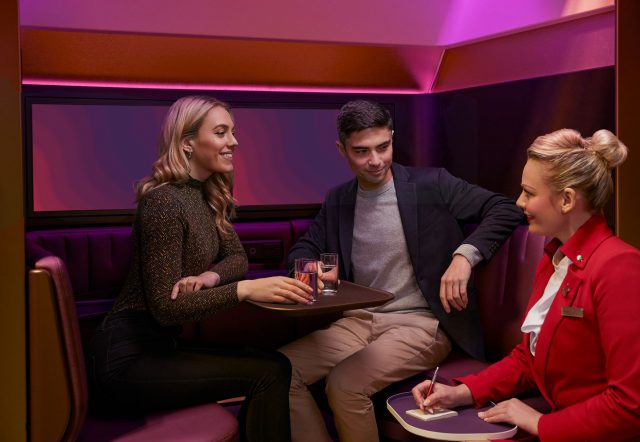 “We’re famous for our on-board social spaces and the introduction of The Booth elevates the customer proposition for our leisure travellers to new heights,” said Corneel Koster, Virgin Atlantic’s chief customer and operations officer.

“I’m delighted that we’ve curated The Booth specifically for our customers jetting off on holiday to our sunny destinations, such as Orlando, offering a truly stylish start to their trips,” Koster added.

According to Virgin Atlantic, ‘The Booth’ has been “designed with beautiful, tactile finishes, including Scottish leather seats and a pressed wool effect table. It’s a luxurious spot just for two, to enjoy anything from a wine tasting experience, to a romantic dinner, a nightcap, or just a change of scene.”

People travelling between Heathrow and Orlando will be the first to experience ‘The Booth’ as a social drinking space with the first flight currently scheduled for December 2021.

Other leisure destinations, including Barbados, will receive the new aircraft with ‘The Booth’ later in 2022.

Virgin Atlantic’s Airbus A350 and its Boeing 787 also already houses a separate communal bar in which upper class customers are encouraged to socialise in mid-flight. On its bookings site, the airline reminds its travellers that drinks on board its flights are included in its ticket prices, stating: “Our onboard bar is a great spot to meet up with colleagues and catch up with friends. The drinks are on us.”