Building a fine wine brand: the story of Chile’s Seña

A quarter of a century ago Eduardo Chadwick joined forces with Robert Mondavi with the aim of putting Chile on the fine wine map. The project was a success, and Seña is now a sought-after favourite worldwide. 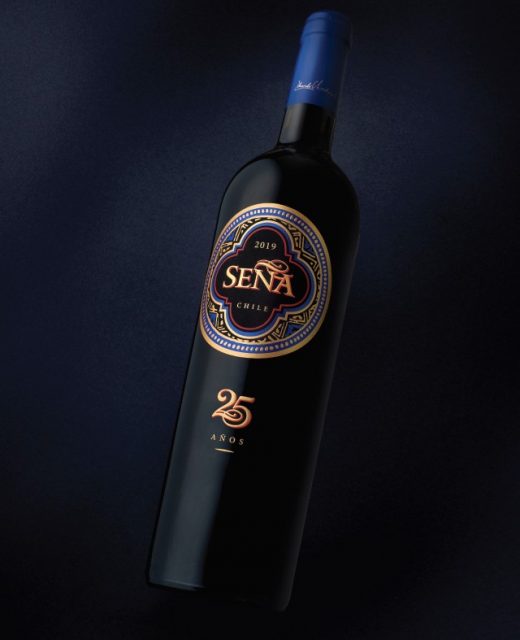 IT’S A question asked by many an ambitious vigneron – how do you create a fine wine brand? By that I mean a bottle that discerning wine collectors want in their cellars, and top-end restaurants want on their lists; a label that trades via merchants and auction houses after its initial release, and a wine that’s delicious when young, but gets better with time.

It’s an enormous challenge, but there’s a blueprint: a wine brand that’s already gained collectible status in its 25-yearhistory; a modern classic that emerged from a country with no fine wine credentials, and a wine story that every marketer should study carefully. It’s the tale of Chile’s Seña, a veritable vinous pup that’s become top dog in South American wine circles and beyond. It’s a name that the world’s major merchants not only know well, but revere.

However, the idea for Seña began more by chance than design. Born out of discussions between the late, great California-based Robert Mondavi and Chile’s ambitious, open-minded Eduardo Chadwick in 1991, Seña didn’t start out with a polished brand plan, although the basis for the project was born of great experience. While Chadwick was taking Mondavi on a tour of Chile’s top wine regions the pair began to speak of the nation’s fine wine potential. How could this best be expressed, and what model would take it to the world? For Mondavi, it was clear: a wine brand modelled on the greatest from France – the first growths of Bordeaux. That meant the creation of an estate for one purpose: to yield a Cabernet-dominant red wine that would get the most influential wine critics talking. For this, a great site for  Bordeaux grapes was required.

That location was found in a stunning, isolated spot in the Ocoa coastal mountain range in the mid-section of the Aconcagua Valley. Less than 40km from the Pacific Ocean, and beneath the Andes, the self-contained site would benefit from cooling sea breezes during the day, and cold mountain air at night, and no risk of cross-contamination from neighbouring properties. Then there were the soils, which, mixing weathered volcanic material and gravels, were free-draining, and perfect for Cabernet. Finally, there were the conditions of central Chile: a viticultural paradise with a long dry growing season and virtually no disease pressure – this is a land that’s even free from Phylloxera.

Then there was the experience. Chadwick belonged to Chile’s most important winemaking family, which traces its grape-based roots back to 1870, while the Mondavis had built a global wine empire based on the brilliance of their wines, and a broad network of contacts cultivated over years of travelling and promotion. It was a powerful partnership that combined winemaking expertise with marketing know-how, but that didn’t ensure an easy ride.

For a start, the pristine place they had chosen required extensive work  before the high-density planting could begin. Challenges included moving large rocks in this rugged landscape, before the Cabernet Sauvignon, Carmenère, Malbec, Merlot, Petit Verdot and Cabernet Franc could go in on the north-east facing slopes – the ideal aspect for achieving fully ripe berries. These were to achieve even greater balance and concentration using biodynamic farming methods.

Then there was the issue of gaining recognition for a wine that hailed from an area with no history of fine wine creation. Indeed, it was for this reason that the name Seña – meaning ‘sign’ – was chosen, because this brand would serve as a signal to the world that Chile could develop world-class wines. In effect, it was the country’s fine wine messenger: a brand created to tell people all about Chile’s vinous capabilities.

The next issue, was how best to spread the word. Once the first vintage of Seña had been made in 1995, it was clear that the site was able to produce great results, and the wines kept getting better as the vines matured, and cellar techniques were perfected. But the global marketplace proved slow to realise the greatness of Seña. Chadwick, who had wanted to put Chile on the fine wine map since meeting Emile Peynaud in Bordeaux in 1985, was frustrated. He knew he had to organise something to attract publicity, while proving that Seña was Chile’s answer to first-growth Bordeaux. This came with a now legendary comparative tasting in 2004, the same year that the Constellation Brands had bought the Robert Mondavi Corporation, prompting Chadwick to take on sole ownership and management of Seña. The sampling, which was managed independently by the late wine critic Steven Spurrier, would see Seña 2001 assessed blind by wine experts alongside  bottles of first-growth Bordeaux and 100-point scoring Super Tuscans. The location was Berlin, and the result shocked the wine world: Seña 2001 came in second place. Not only that, but the wine to beat it to the top spot was another from the same Chilean stable: Chadwick 2000, a pure Cabernet that hailed from another of the producer’s vineyards, but in the Alto Maipo area of the Andes.

THE BERLIN TASTING
Now known as The Berlin Tasting, it has been as important for the Chilean fine wine scene as the Paris Tasting of 1976 was for the top Cabernets of California – an event also hosted by Spurrier.

Crucially, the result of this inaugural Chile vs the fine wine world spurred Chadwick to repeat the exercise around the world, with 21 comparative blind tastings taking place over the next few years, all of which yielded remarkably consistent results.

Indeed, these events, held in 18 countries, reached 1,400 “key opinion leaders”, according to Chadwick, and, crucially, “90% of the time we had one of our wines in the top three”.

While these had showed that Seña was making young wine of first-growth quality, the test of a true fine wine comes with its ability to improve as it ages. For this, in 2012 in Hong Kong, Chadwick started a new tasting tour, featuring library stock of early Seña vintages alongside similarly aged wines from the world’s greatest estates.

Due to the location, Chadwick enlisted the support of Hong Kong based Master of Wine Jeannie Cho Lee for these series of tastings, which also took place in Seoul and Taipei, and five major cities in China. Once more, Seña performed reliably brilliantly. And the results were good too when the same model was brought to Europe, with further vertical comparative tastings held in Zurich and London.

By 2017, the label had earned another milestone accolade: it achieved a 100-point score for its 2015 release from James Suckling. In short, no one could be left in any doubt of the quality of Seña, nor the  ability of Chile to produce fine wines.

But Chadwick had done something else while touring the world doing tastings: 12 years ago he changed Sena’s approach to distribution by listing the Chilean top-end label on La Place de Bordeaux. Being handled by France’s top négociants meant two things for Chadwick: Seña would be sold alongside the great fine wines of France and Italy, and the Chilean label would achieve rapid, truly global distribution among the world’s great fine wine sellers. It’s been a long journey, and 25 years on, after years of work in the vineyard and cellar, and on the road promoting the results, Chadwick can now proudly say that both Seña, and with it Chile, “has entered the club of world-class wines”. That doesn’t mean that Chadwick is stopping there. His latest move comes with the September launch of the 2019 vintage, which is another great expression of a distinctly Chilean fine wine. However, with this release, the 25th vintage since Seña was launched, comes a new, enticing look.

For now, if you ask a wine professional or learned collector to name the great sources of Cabernet worldwide, along with France and Italy, they should mention Chile. Without Chadwick’s efforts over the past 25 years, that might not have been the case. And with them, one knows what it takes to build a fine wine brand from scratch. So if anyone does ever ask you how to create a top-end label, tell them to “do a Seña”.