Under the radar: Marselan’s past, present and best producers

The little-known Marselan grape has found a foothold in China, thanks to its resistance to disease and suitability for the country’s climate. Elizabeth Gabay MW traces its history, and highlights some of the world’s best bottled examples. 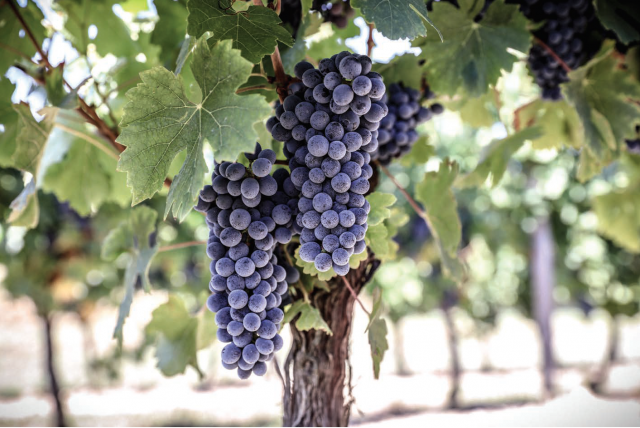 THERE WAS a burst of enthusiasm in the media recently, generated by the widespread surprise that China seems to have wholeheartedly embraced Marselan wine. This newfound attention served to give the Marselan market a noticeable boost. However, despite its burgeoning appeal, the grape is still a little-known variety that has some way to go both in terms of volume and awareness.

A wide-ranging tasting of Marselan I undertook this March revealed a variety bursting with great potential. Diverse styles ranged from fresh and fruity to big and intense with the common denominators being good fruit, fresh acidity and fine tannins. Nevertheless, despite slow but steady growth in plantations, and some highly attractive wines, Marselan remains relatively unknown. This may all be about to change. Chinese Marselan came to international attention with a masterclass on world Marselan in November 2017 at Prowine China, and a masterclass led by professor Li Demei, chief winemaker at Hebei’s Domaine Franco Chinois, at ProWein in March 2018.

In 2018, Chinese Marselan’s potential was further acknowledged by five medals at an Asian wine-tasting competition, and by the hashtag #internationalmarselanday, created in April 2018 by China-based wine writer Jim Boyce.

The international press responded with curiosity to Marselan being claimed as China’s new signature variety.

In 2019, Julian Boulard MW, who lives in China, focused his Master of Wine research paper on Marselan’s potential. Marselans from other countries have also won medals, and in 2020, the Mondial de Bruxelles was due to host the first international Marselan competition, based in (where else?) China, which was cancelled due to the spread of Covid-19.

However, despite increasing awareness and newspaper column inches, Marselan is still very much regarded as a ‘new’ variety. In 1956, the Institute National de la Recherche Agronomique launched a programme to cross V.vinifera to create high yielding, disease and drought resistant and well-flavoured varieties. Then in 1961, Paul Truel, at the Domaine de Vassal INRA research station in southwest France, created a Cabernet Sauvignon/Grenache cross, which he named Marselan, after the nearby town of Marseillan.

The first clone, 980, was released in 1990. Researchers liked the variety’s disease resistance, especially to mildew, and its flavour. Growth was at first slow, but surged after INRA’s patent expired in 2010. Now, Vivai Cooperativi Rauscedo in the Veneto region of Italy is working on a new clone, VCR498*, to give growers more choice.

The area under vine has almost doubled in France in the past decade. In 2018-19, it became the 12th most planted red variety in France, with 6,199 hectares, mainly in the southwest. Elsewhere numbers are sketchy. China is possibly the second largest producer with either 467ha or 667ha in 2019 (estimates by Li Demei and Dr Duan Changqing respectively). The Chinese government is funding increased planting.

Meanwhile, Uruguay ranks highly in Marselan with 184ha, and new plantings yearly. In other territories, numbers are less precise but Marselan is also planted in Israel, Spain, Brazil, Argentina, Bolivia, Chile and Bulgaria, with some plantings (albeit sometimes only a few hectares) in Russia, Romania, the US, Morocco, Tunisia, Lebanon, Portugal, Italy, Serbia, Switzerland, Hungary, India, South Africa, and Turkey.

Producers have been converted to Marselan for its disease resistance, making it easier to grow in organic and sustainable viticulture, as much as for its appealing fruitiness. The majority of Marselan is still found as part of a blend, which makes for an easier introduction to the variety. Consumers still need convincing about purchasing an unknown varietal, with many people cautious about Marselan’s lack of noble history and the fact that it’s a cross. However, there is some wine sold as a varietal, with markets such as the UK showing enthusiasm.

Varietal Marselan appears under the Pays d’Oc IGP label, but producers have experienced challenges selling it. JeanFrançois Orosquette of Château la Grave in the Langedoc finds it easier if he can convince buyers to taste the wine first, but selling still concentrates on his domaine’s reputation rather than varietal qualities. Pierre Sibille, of Domaine Sibille in the Languedoc, says Marselan is interesting to sell, precisely because it is so unknown and always takes the taster by surprise when they discover its quality and character.

Marselan was admitted in small quantities in the blend under the Côtes du Rhône appellation in 2011, which, according to Gabriel Jouve of Domaine de la Catherinette, has helped when selling its Marselan IGP Gard. Sommeliers play a useful role in introducing the variety to customers, although Stéphanie ForestRiffaud from Domaine VillepeyrouxForest in the Langedoc has only once had a customer (a restaurant owner) refuse to list the wine, specifically because Marselan was a cross.

Other wineries incorporate Marselan into their personal story to help boost sales. Caves Richemer, based near Marseillan, promotes Marselan as its signature local variety to tourists, especially as rosé, and also sells it in a bag-in-box format in Sweden.

Josep Serra of La Vinyeta, in Emporda, Spain makes a co-fermented Marselan and old-vine Grenache Gris, called MigMig. It sells on quality and, on the story of blending his and wife, Marta’s, youthful, innovative personalities with the tradition of the vineyard. Ido Lewinsohn MW, head winemaker at Barkan, Israel, sees his market for Marselan as being open-minded, involved, younger consumers. Often the same audience will try other lesser-known grapes such as Petit Verdot – anything but Cabernet.

It is really Marsellan’s disease resistance that has won it fans, although Gaelle Soriano, of Foncalieu in the Languedoc, says the wording is important. Promoting Marselan for its disease resistance sounds scary, suggesting genetically modified crops, while “sustainable” is far more attractive. The vine’s resistance to mildew is helpful in warm humid regions, such as China, where it was introduced in 2001, after a Chinese delegation, including Li Demei, visited France. The initial 2.75ha parcel yielded its first harvest in 2003. Demei was immediately impressed, noting its “dense, bright purple colour, rich, fresh, red fruits aromas, with some white fruit, lychee, and mint notes and the juicy, sweet/fruity finish”.

Since then, Marselan has been slowly introduced to most of China’s main wine regions, with 20 vineyards growing it by 2018. However, the necessity to bury the vines during China’s cold winters in several regions limits options of planting density, training systems and the use of rootstocks. The release of China’s Grace Vineyards’ 100%-Marselan varietal in 2014, aged for two years, went some way towards boosting respect for the variety. Inspired, a second Chinese delegation came to France in 2015 to focus on Marselan, visiting, among others, La Catherinette in the Rhône.

Following the much-needed publicity and education achieved in 2017, Yean Lee, winemaker at Grace Vineyards, noted that this success had encouraged increased plantings of Marselan and that, in the past two years, “the price per kilo has surpassed that for Cabernet Sauvignon, with some wineries making Marselan their flagship wine, and others replacing Cabernet with Marselan in the vineyard”. Writing on Jancisrobinson.com in 2019, Australian viticulturist Richard Smart, the ‘Flying Vine Doctor’, wrote: “I have observed Marselan for a while. In Hebei, now Ningxia, it does very well. It may be China’s signature variety.”

Aileen Lee, a wine journalist in Shenzhen, China, believes Marselan is “the Chinese wine star of tomorrow”, although volumes are still small and the majority of Chinese consumers still do not
know Marselan. Younger wine enthusiasts have been attracted by its less pretentious image, its lower price (compared with Cabernet Sauvignon) and organic label, while older drinkers see its modern heritage and ‘non-noble origins’ as a weakness. The knowledge gap between wine industry professionals and enthusiasts and that of the average wine consumer is large, with little interest
shown in foreign Marselan. The Marselan from Uruguay’s Bodegas Garzon is one of the few imported exceptions, and Marselan from at least one Languedoc producer is sold in bulk to China, its end destination unknown, but believed to be blended into local wine.

Foreign markets are largely unaware of Chinese Marselan, as almost none is exported, even to nearby Asian countries. Although acknowledging its high quality, Lee feels Chinese Marselan is often too highly priced. Leona de Pasquale, a London-based wine educator from Taiwan, says Marselan is relatively unknown in Taiwan. One big supermarket chain, RT Mart, sells two expressions (Foncalieu’s Ensedune and Salton from Brazil, at the cheaper end of the market). In Japan, Kenichi Ohashi MW, says: “Marselan does not sell well. Japan is a traditional market that prefers wines and varieties with a history.” Roddy Roper, an MW student living in Japan, adds: “While Japanese wine enthusiasts can be quite inquisitive and open, there is no great awareness or demand yet for the variety.” He adds that he is only aware of two Marselans on the market, Domaine Auriol and Foncalieu, both from the Languedoc.

Marselan is growing fast, and is slowly attracting attention, but, with volumes still low enough to keep it below the radar. Success in competitions, marketing and education is still essential to support this variety. A wide variation in quality, style and pricing for Marselan exists, with cheaper wines raising doubts among consumers as to the variety’s potential quality. As tastings have illustrated, not only is the quality there, but Marselan has versatility and ageing potential.

I have chosen the top 12 wines from a tasting of 50, which illustrate the versatility of styles and the character of Marselan.

RESERVA 2018, BODEGAS GARZÓN, URUGUAY
Crimson red. Restrained savoury fruit with hints of sous bois and dark floral notes. Statuesque on palate with blueblack minerality, tight, well-integrated tannins. Cassis and red currant fruit with a touch of sour berries and spice coming through and leading into long fresh mouth watering acidity. Hints of oak on the structure. Restrained but with depth and complexity beginning to show.
Price: €13

MIGMIG 2017, LA VINYETA, DO EMPORDA, SPAIN
Co-fermented with Grenache Gris. Savoury smoky aromas. Some gentle stone fruit and floral. Long fresh acidity, with saline minerality. Grippy, textural tannins, black hedgerow fruit with some floral notes coming through on the finish rather than the start. Mid-palate is lighter, smooth and creamy but the whole structure is grippy and saline. Still very young with the jammy, floral notes balancing the firm, tight tannins.
Price: €15.50