14 June 2021 By Lucy Shaw
Lucy Shaw speaks to husband and wife team Tommy and Jules Gambino about growing their Gambino Prosecco brand into an industry leader, and their plans to bring it to the UK. 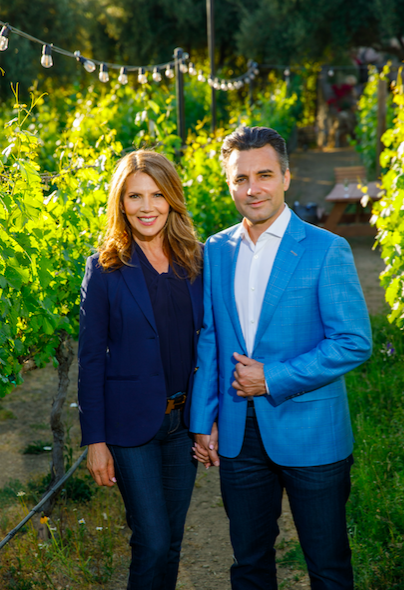 Tommaso and Jules Gambino are quite the double act. Their meet-cute took place at an LA restaurant 20 years ago, when Gambino spotted Jules from across the room. When she walked by the bar he asked his friend to tell her that he wanted to take her out. Liking what she saw, Jules accepted his offer. They met for lunch at La Scala in Beverly Hills a week later on a first date that turned out to be so successful it carried on until dinner.

Based in LA, Massachusets-born Jules, and New York-born Tommaso – Tommy to his friends – launched Gambino Prosecco in the US in 2015, feeling the time was ripe to introduce the brand to the American market. “It felt like a good time to bring Gambino to the States – people didn’t used to understand Prosecco in America, but recently consumers have really started to appreciate it, so the timing was perfect,” says Tommaso.

Gambino’s roots are Sicilian – born in New York in 1973, he and his family moved back to Palermo when he was a child, before settling in Los Angeles.Having worked as an investment banker and property developer, Gambino decided to pursue his passion for wine by launching a Prosecco brand. “I grew up drinking sparkling wine – Prosecco was always the drink of choice in our household. In Italy you don’t need an occasion to open a bottle,” he says. Nailing the quality of his offering was a priority, not least because it’s the only fizz he drinks. First out of the blocks was Gambino Extra Dry DOC.

“I thought it would be best to launch with a DOC Prosecco, as that’s what everyone drinks. It was well received in the US, and as sales started to grow, I decided to take things up a notch by launching Gambino Gold – a DOCG Brut Prosecco. I call it the ‘grand cru’ of Proseccos as the quality is phenomenal,” says Gambino, who believes well-informed US consumers know the difference between DOC and DOCG Prosecco, and seek out DOCG expressions at high-end restaurants.

“Consumers recognise the difference in quality between DOC and DOCG Prosecco now, particularly in fine dining restaurants in New York, LA and Las Vegas, where DOCG expressions are on pour by the glass,” says Gambino. “The launch of Gambino Gold was magic from the get-go – everything just fell into place.” The newest addition to the range is Jules Prosecco Rosé DOC, made from a blend of 88% Glera and 12% Pinot Noir from Treviso. 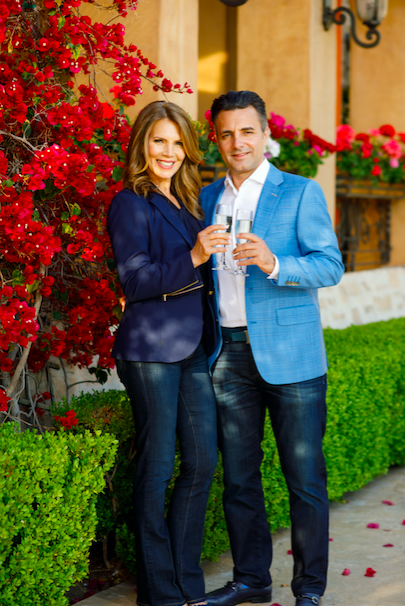 Focusing the brand firmly on the on-trade, Gambino has secured listings at a number of high-end restaurants, including Hakkasan, top hotels, from the Nomad to the Delano, and Las Vegas hotspots the Bellagio and MGM Grand, where magnums are proving popular.

Behind Gambino’s breezy exterior lies a steely determination to succeed. In the early days of getting Gambino off the ground in the US, he and Jules did a lot of pavement pounding to get their Prosecco into the glasses of future fans of the brand. Gambino believes a passion for the product is the secret to creating a successful brand.

“Passion drives you to put in 18-hour days, seven days a week. There are no days off for us. We work our markets city by city, and personally meet all of our customers and restaurant clients across the country,” he says.

“You can’t start a brand and consider it a job – otherwise you may as well get a nine-to- five. You have to give it all your time and attention, listen to what the market wants, be flexible in your approach and offer value to your customers.”

Putting in the hard yards has meant doing tastings at small stores in the middle of nowhere next to hotdog stands, where the punters downed the Prosecco like shots, and driving through snow storms on Thanksgiving weekend to host an event at a small retailer in The Berkshires in Massachusetts, but the work seems to be paying off. “You never know who you’re going to meet at these events, so you have to go to every tasting and meet people in person – that’s how you build loyalty,” says Gambino.

He and Jules have also harnessed the power of social media to grow the Gambino brand in the US, and have accrued over 152,000 followers on Instagram. Gambino Prosecco has fast clocked up a starry following, and counts singer Jennifer Lopez, Hollywood actor Sylvester Stallone, and Turkish chef Nusret Gökçe, better known as Salt Bae, among its fans. The couple built their celebrity following by winning listings at hip LA restaurants frequented by the stars, and having bottles of Gambino Gold sent to their tables.

“We want to elevate the image of Prosecco in the US – there’s a cachet to drinking Gambino. We want to show that sparkling wine doesn’t need to be really expensive to be high quality,” says Tommaso. The brand’s logo features a fedora within a laurel wreath, and the most recent post on the @gambinoprosecco Instagram account runs with the tagline ‘drink with honour’.

“Everyone is on Instagram and Facebook, so having a strong social media presence really helps when it comes to building your brand; it’s such a powerful way to reach people,” says Gambino. “Creating a strong Prosecco brand is my main goal for Gambino. I want people to think of Gambino when they think of Prosecco.”

The couple’s approach from the offset has been to listen to what their customers want and deliver it to them. “We’re on hand for our clients 24 hours a day – if they say they want a sparkler in keg, or a fizz closed with a screwcap, we’ll make it for them,” says Jules, who reveals she’s been getting a lot of requests from retailers for Gambino in handbag-sized 20cl bottles.

The pair visit Valdobbiadene around four times a year to make sure their Prosecco production is ticking over smoothly. “We’re very hands on with the business and every free moment we get we go to Italy – we love being there, especially for the harvest,” says Gambino.

Favouring a slow and steady approach to developing the brand, since launching in 2015, the pair have grown Gambino’s presence across the US – the fizz is now on sale in 43 states. The ultimate goal is for it to become a million-case brand, though they seem happy to let the market dictate their growth rate.

“We were very methodical in our approach, and knew we couldn’t spread ourselves too thin, so we picked the major cities we wanted to launch in initially and grew from there,” says Gambino, who has brand ambassadors working for him in key states. The brand’s expansion abroad had to be put on ice during the pandemic, before which the Gambinos were on a plane once a fortnight spreading the Gambino gospel.

Optimistic by nature, Tommaso thinks the on-trade is going to bounce back next year. “I think in 2022 we’ll go back to our pre-pandemic lifestyle and we’ll be back on a plane again. It’s amazing to be able to do what you love and we can’t wait to start promoting the brand again – there are a lot of cities waiting for us,” says Gambino, who is keen to launch the brand to the UK and is in talks with a number of suppliers. “We’re looking to bring Gambino to the UK in 2022, but we need to see where the on-trade is at next year,” he says. 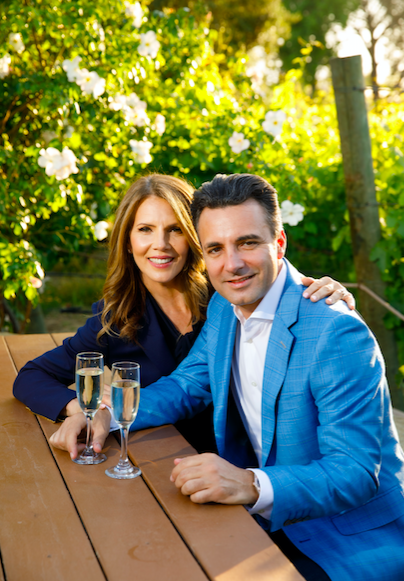 For an on-trade-focused brand, the shuttering of restaurants across the US for much of the past year hasn’t been easy, but the sector is starting to open up again, with restaurants in Florida fully open now, and those in LA and New York allowed to operate at 50% capacity. “We can see the pent-up demand already – the on-trade is coming back faster than people anticipated,” says Gambino, who is keen to promote the idea of enjoying Prosecco throughout a meal rather than treating it as a bookend drink with which to start or end the evening.

He believes the changing of the rules last year to allow for the production of pink Prosecco has been beneficial to the category, helping it to tap into the growing global thirst for rosé. Another trend the pair are keen to capitalise on is pre-mixed cocktails, with an RTD Mimosa and Bellini housed in miniature glass bottles soon to join the

Gambino range. The blood oranges that go into the Mimosa are sourced from Sicily, as Gambino believes they’re the best in the world.

To assure the continued success of the Prosecco category, Gambino believes pricing is key. “It’s important that prices remain stable. Prosecco needs to maintain its accessible price point. If prices rise too high then you’ll lose your drinkers, but if they fall too low then people won’t want to drink it.,” he says.

As to whether he’d consider adding a Cartizze to the range, he’s been toying with the idea for a while, but feels it’s too soon to tell the Cartizze story in the US. “We’re still educating consumers about Valdobbiadene and DOCG Prosecco, so I don’t want to throw Cartizze into the mix too, as it has a very niche audience at the moment, but down the line we’ll look to releasing one.”

For now, the Gambinos are taking things one day at a time and are looking forward to the world opening up again so they can introduce Gambino to new markets, as Tommaso explains: “My dream is to get to the stage where rather than ordering a glass of Prosecco at a restaurant, people ask for a glass of Gambino. When you drink Gambino you’re drinking a wine made with honour.”