Having been something of an open secret for some time, the wines of Washington State are preparing to enjoy their moment in the sun. Here, we highlight the exciting expressions coming out of the region. 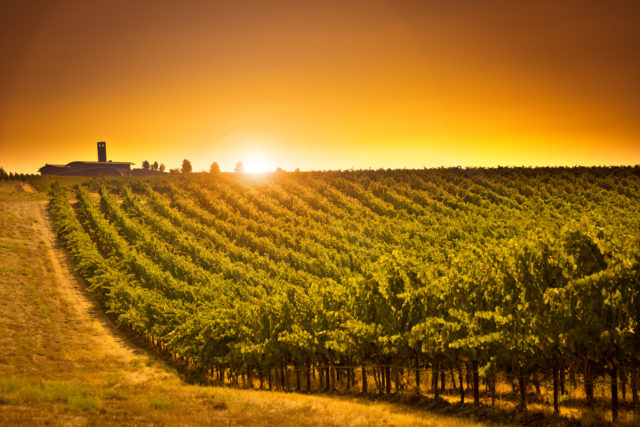 Despite being the US’s second-largest wine-growing region, Washington State has remained  somewhat under the radar for many wine lovers. However, the variety, consistency and quality-to-price ratio of the region’s wines, coupled with the fact that it is one of the most rapidly growing wine regions in the US, means this won’t be the case for long.

As Kyle Price, national sales manager at Maryhill Winery in Goldendale explains: “We have the perfect climate to grow great grapes and produce great wines. Winemakers do a great job, but 80% comes from the grapes and soil.”

Several catastrophic slackwater floods from Lake Missoula thousands of years ago deposited layers of soil and fine loess from neighbouring Montana and Idaho across the region’s volcanic basalt foundations, leaving a free-draining, nutrient-poor soil, which is ideal for high quality viticulture.

As a result, the region produces around 70 different grape varieties as a showcase of its unique terroir.

The state is perfectly situated for wine production. At 46 degrees latitude, it enjoys the same “sweet spot” as France and Italy, while its long hot summer days and cool nights preserve the wine’s acidity. The majority of its vineyards lie in the rain shadow of Cascade Mountains, protecting them from the Pacific weather, so they receive around six inches to eight inches of rain a year. (Only Puget Sound AVA, established in 1995, lies on the western seaboard, where some cool-climate varieties are grown).

Although it is pretty far north, there’s no shortage of warmth – for example the temperature in July and August, when the grapes need ripening power, is warmer than either in Bordeaux or the Napa Valley, but it conveniently dips by September and October.

Speaking at a recent Washington State Wines masterclass, wine writer Jamie Goode explained that this allows winemakers to pick at the right time more effectively. “If it is very hot, the acids might drop very quickly and in the logistics of doing a vintage, you can miss the best time to pick. So that cool period during harvest is a big advantage,” he explained. Wine grapes have been grown here since early 19th century, but it was the establishment of reliable irrigation – a prerequisite for growing vines in land that is otherwise almost a desert – that marked the turning point.

The first commercial vineyards were planted in 1960 and within 10 years there were 10 wineries, including the two biggest,  Columbia Winery and Chateau Ste Michelle (established in 1962 and 1967 respectively). There has been rapid expansion over the past 20 years, and there are now around 1,000 winery licenses in operation, the vast majority (90%) of them operating as small boutique and family-owned wineries that produce 5,000 cases a year or less. Across the state’s 16 AVAs (American Viticulture Area) there are 400 growers tending 60,000 acres of vineyard, producing an impressive 201,000 US tons of grapes.

As Goode pointed during the session, this is a significant wine region.

There are now 16 AVAs, with Columbia Valley AVA, which cover 90% of the wine growing area, containing 14 of them, including the first AVA, Yakima Valley (established 1983), Walla Walla, Red Mountain, Horse Heaven Hills, and Rattlesnake Hills.

Best of Both Worlds

Goode argued that although Washington State’s wines had a New World character  with plenty of fruit and ripeness, its appeal lies in being “halfway between New and Old World styles. They can have structure, acidity and focus, but also with ripe fruit,” he explained.

An AVA of particular note is Walla Walla AVA in the southeast of the state, which produces interesting wines, especially Cabernet Sauvignon, Merlot and Syrah. It is home to some of the region’s oldest wineries, and one of only two AVAs that cross the state boundary into Oregon (along with Columbia Gorge).

The smallest and warmest AVA, Red Mountain, is also making a name for itself. “Red Mountain has an aura about it, it is one of the most sought after AVAs in the state, almost exclusively dedicated to red grapes, with average temp of 90 degrees and only five inches of rain a year,” Goode explained.

In terms of varietals Cabernet Sauvignon leads the way, with over 53,740 US tons harvested each year, followed by Merlot (30,350t), which complements Cabernet Sauvignon in Bordeaux-style blends as well working well as a standalone variety in its own right.

As Jason Gorski, director of winemaking and viticulture at Delille Cellars, points out, Merlot expresses terroir, with the Merlots of Yakima Valley offering a very different expression from those from Red Mountain.

“The diurnal swings make a different character,” he explains.

Syrah is also a rising star, with Walla Walla proving an exciting area for the variety. For wineries such as Aniche Cellars in Columbia Gorge, on the southern border with Oregon, Syrah is the backbone of its Rhône-style wine.

“It’s not that huge ripeness you can get in other warmer regions, but we’re trying to hold onto acidity. As far as I’m concerned, it’s what Washington can do really well.”

Delille Cellars, one of the state’s older wineries, has been making a Sauvignon Blanc Bordeaux blanc-style wines since the late 1990s. “It wasn’t really the intent to make a Washington State Sauvignon Blanc driven wine that would last for 20 years, but that’s what we managed to do.” Delille’s director of winemaking and viticulture Jason Gorski says.

As Jamie Goode points out, Washington State’s strength lies in producing very  good quality at good price points. “If you compare it with California, you’ve got Sonoma and Napa, and the more expensive AVAs and the valley stuff, which is cheaper but not so nice. What Washington State can do is premium but at this US$10-US$20 price point, producing things than over-deliver for their price points, which is a great strength,” he says.

Kyle Price agrees, pointing out that the cost of land is much cheaper than in Napa – so you get quality fruit, attracting great winemakers but for a fraction of the price.

It is, according to Price, just one of the many reasons why Washington State has such great potential.