Pink Prosecco will ‘breathe life’ into the sparkling wine category

The dawn of Prosecco DOC Rosé finally came in 2020 after years of lobbying by the industry, and while it’s only been on UK shelves for a matter of months, it’s already making its mark on the sparkling category.

Prosecco DOC Rosé was officially permitted by the Italian government in May of 2020, while exports were allowed from November 2020.

Italian winemakers produced a confirmed 16.8m bottles in 2020, according to the Prosecco DOC Consortium, made from the traditional Glera grape and blended with between 10-15% Pinot Nero (Noir).

A total of 50m bottles are expected to be produced in 2021, although the DOC has stressed that it has “no confirmation that this quantity will be available at this stage”.

Of that volume, 80-85% is destined to export, much of it to the UK, alongside other key markets including the USA, Canada, Scandinavia and France, with specific export figures expected to be released in March.

It’s still early days, of course, and pink Prosecco is unlikely to experience the same level of intensity with which UK consumers lapped up DOC Prosecco. Supply will be restricted by the amount of Pinot Noir available. But it’s already clear that demand in the UK is strong.

Lidl was the first retailer to stock Prosecco DOC Rosé ahead of the festive season. It reported sales of more than 1 million bottles in the four weeks ending 27 December. Considering that only 16.8m bottles of the pink fizz were produced in 2020, that would mean 6% of the year’s entire rosé Prosecco production was sold by just one UK retailer, proof of the well-place confidence invested in the UK by producers.

Follador launched its Prosecco DOC Rosé Laelia last year, a Brut made from a blend of 90% Glera and 10% Pinot Nero,

“We took on board our UK distributor’s request to introduce pink Prosecco as quickly as possible because the market was very keen to try this new product,” says Cristina Follador, sales and marketing director. “The UK has been very receptive and this was endorsed by the incredible feedback we immediately received. Sales have confirmed British interest in pink Prosecco, beyond a doubt.” 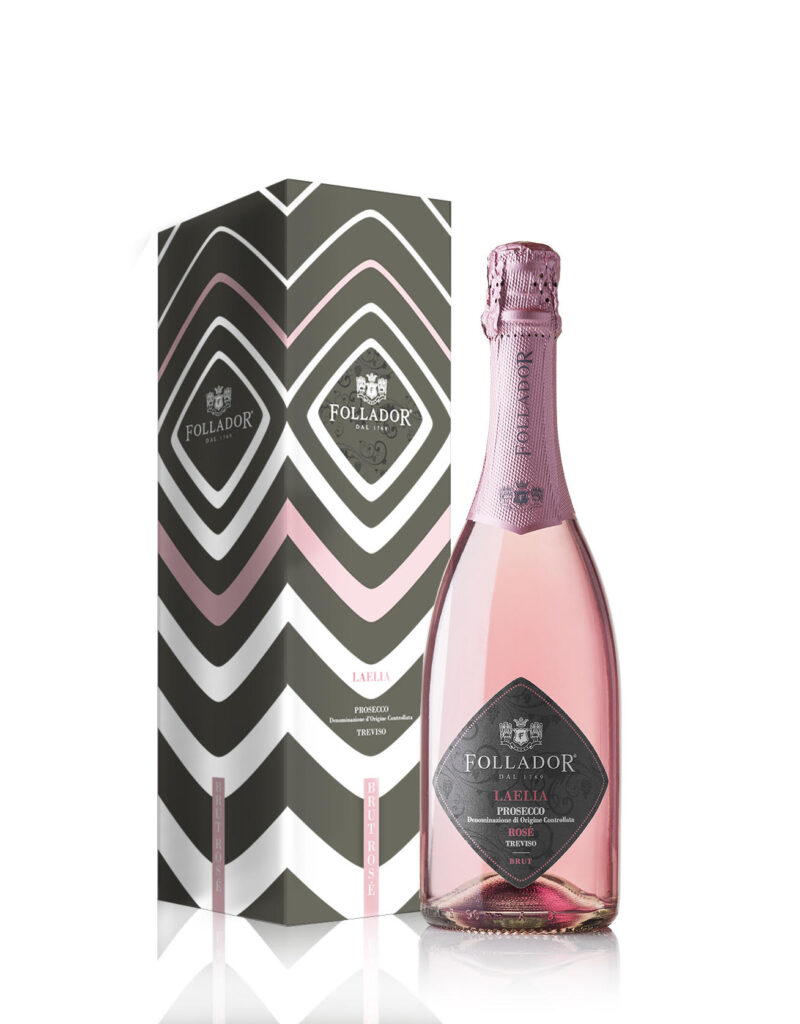 Freixenet Copestick has launched its I heart Rosé Prosecco, Mionetto Prosecco Rosé, plus pink Proseccos from Corvezzo and Follador, reporting that the sales forecasts so far are “very encouraging”.

“I am very confident that Prosecco rosé will be a massive success,” said Robin Copestick, managing director. “Prosecco and rosé together has to be a winning formula. Additionally the wines I have tried so far have been of a very high standard and the pricing is spot on. The producers with whom we work have taken this project very seriously from a quality perspective and they all seem to realise what a great opportunity this is for them and the category.”

While confidence in pink Prosecco is high, the hope is that it will not only refresh the Prosecco category but elevate its profile in terms of quality and price, creating a second higher tier within the category that commands a higher price point, much like rosé Champagne.

“Prosecco, and even more Prosecco Rosé, is a high quality sparkling wine with production costs similar or higher than those of Champagne,” adds Sandro Bottega, president of Bottega S.p.A, which has launched two Rosé Proseccos; Il Vino dei Poeti Prosecco Doc Rosé and Pink Gold Prosecco Doc Rosé Bottega. “The big challenge will be to convey the real value of the product to the consumer. Rosé Prosecco can strongly help in this sense.”

This could prove a hard task given that while Prosecco is extremely popular in the UK, much of its success is due to its keen pricing, with producers often struggling to convince consumers to pay more for a better quality Prosecco.

Will Brits be prepared to pay more for a pink Prosecco? For Cristina Follador the answer is a resounding yes. “British consumers appreciate the difference between a good Prosecco and a cheap Prosecco,” she says. “I think the same can be said for pink Prosecco: if the quality is good, if it is an easy-drinking wine with a well-balanced flavour and bouquet I’m sure they will be prepared to pay more for it.”

In a survey by commissioned by the DOC Prosecco by Italian Wine Monitor Nomisma, 79% of UK respondents said they would purchase a pink Prosecco, with 65% willing to pay up to 10% more than a Prosecco DOC, but the Consorzio is clear that quality needs to be better communicated by producers and distributors in order to achieve a higher price point.

“The biggest challenge will be to get the message across that pink Prosecco is a variant [it’s own style], not an alternative to real Prosecco with 100% Glera grapes,” stresses Follador. “It is these white grapes that give Prosecco its typical fragrance, bouquet and aromas. As ambassadors of Valdobbiadene Superiore D.O.C.G., we’ll have to leverage the fact that these two wines are completely different. Producers and distributors must convey this message.”

Pricing aside, the more practical challenge for producers will be sourcing enough Pinot Noir to meet anticipated demand. “I am convinced that Prosecco rosé is not only here to stay but it will continue to grow and to breathe life into the whole sparkling category,” adds Copestick. “How far it can go will depend on the availability of Pinot Noir.”

Across the nine production areas of DOC Prosecco, Pinot Noir vineyards account for between 1,600 to 1,700 ha, according to the DOC consortium. Assuming that around 1,000 ha of that total are destined to the production of Prosecco DOC Rosé, and considering the yields in the processing of the grapes into wine and the percentages of the blend, the Prosecco DOC Consortium believes there is the potential to produce “between 90 and 140 million of bottles” of DOC Prosecco Rosé. That compares to the 486m bottles of DOC Prosecco produced in 2020.

“Prosecco Rosé will be an important niche product,” adds Bottega. “The volume requested by the market will be available and I don’t think it will turn out to be a passing trend. It will not be comparable to the Prosecco boom, but it will help to improve the success and the reputation of the whole Prosecco category.”