The CEO of Kent-based Defined Wine, Henry Sugden, said that the business has been growing steadily since it was founded in 2018 and now has 28 clients, with the aim to “stay slightly ahead of demand”. 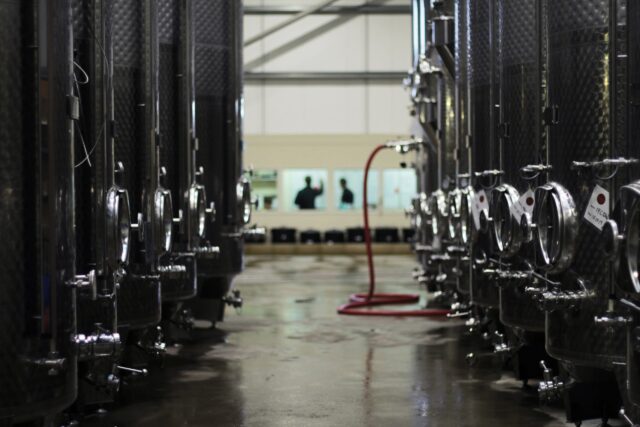 Defined Wine was founded by Sugden in 2018 and now has two harvests under its belt. With no vineyards of its own, the company makes wine for producers of all shapes and sizes, and also offers contract bottling, labelling, riddling, disgorging and laboratory analysis services.

Sugden, who has invested £1.5 million in the business, said the idea to set up a contract winery was inspired by a talk with Ruth and Charles Simpson of Simpsons Wine, who have previously spoken out about concerns over a shortage in wine processing equipment relative to the number of vineyards in the UK.

Defined Wine pressed over 400 tonnes of grapes last year, and disgorged over 90,000 bottles, numbers which are set to increase this year. Its facility boasts three presses and over 100 tanks, ranging in size from 400-litres to 20,000-litres.

While by volume it produces more sparkling wine (81% sparkling vs 19% still), in terms of individual wines, it makes more still wine. It is currently producing 45 still wines, 16 sparkling, a cider and a base wine for vermouth. The team have had requests for everything from classic method fizz to Pét-Nats and orange wine.

Now with 28 contract winemaking clients, and more who opt for some of the company’s other services, Sugden said demand is definitely there.

Speaking to members of the trade over Zoom, he said he had a size in mind that he believes the business can grow to, but that it depends on a number of factors.

“What we’re trying to do is stay slightly ahead of demand,” he said. “It’s a tricky balance between what we think demand will be versus the cash, space, equipment, and everything else.”

“A lot of our clients are brand new. I set us up not to poach people from elsewhere, as there’s enough new people coming in.”

That said, Sugden believes that without its own brand of wine, Defined Wine can always put the client first.

“We ensure that everyone is equally important to us,” he said. “We’ve got no favourites, everyone gets a fair share of the pie. We don’t want to have a house style.”

Last year Sugden hired Nick Lane as head winemaker, who had previously spent five years working in Champagne, most recently at Dom Pérignon. New Zealand-born Lane worked for Moët Hennessy since 2003, starting out at Cloudy Bay, and before that also spent time making wine in Burgundy, California and Australia.

“In terms of adapting production from Champagne norms, you have to be comfortable with more acidity and raciness,” he said. “But you have to find a balance with that too. One of the challenges for me is managing that acidity, which is naturally very high. Yes, it’s part of this country’s signature style, but it also shouldn’t fall into the realms of extremes either. There’s a middle ground to be found to give the wines a nice balance.”

Lane also spoke about the great variety of wines the company was producing and the relative freedom from restrictions England and Wales enjoy.

“There is no limit on growers and winemakers trying new varieties,” he said. “It can be terribly frustrating in other parts of Europe where you hear that you can forget about planting X grape, you have to plant the local variety. While that has had a certain amount of success, it’s also frustrating and the freedom we have here is something that should be cherished and nurtured. Local styles and individuality will present themselves naturally over time, and they’ll be a certain about of attrition when the strongest and best wines will survive.”

Defined Wine, which has a tagline of ‘you define what you want and we’ll make it’, has to strike a balance between indulging the wishes of clients and managing expectations.

Lane said his job was to be “honest and constructive” with clients, particularly in regards to ripeness and having an end-goal.

“Ripeness is a challenge still and it will continue to be so,” he said. “When planting something quite versatile like Pinot Noir, you really have to have an end-goal in mind. If you say ‘if it’s warm enough we’ll make a red, but if not we’ll make a rosé or a sparkling’, there’s no wriggle room in the climate for that. If you want to make a red wine, then you have to plant the right clone on the right site and reduce the crop. Then nine out of 10 times you’ll make a good wine. If you’re just going for the dream vintage and you plant a high-cropping clone suited more to sparkling, then one out of 10 years you’ll make a good red wine.”

Speaking about the supply vs demand issues that have been raised, Sugden said English vineyard owners should be realistic.

“The first thing I always ask people is what are their objectives what is their route to market,” he said. “People who get that right are consistently selling all of their supply. People who don’t understand that, or who have got that wrong, are being left with a lot of wine to sell. We’re really seeing that separation and I’m sure it’s going to get worse over the next couple of years. Will there be oversupply? Who knows, but I think it will come down to the producers.”

Sugden, who says his clients range from big-name sparkling wine producers right the way down to small-scale vineyards, is working with producers to ensure they’re best equipped to deal with what is becoming an increasingly competitive market.

“We run viticulture sessions for our growers and we also help out in marketing and selling,” he said. “We need to be consistent in what we do and give our clients quality products.”

He said the goal was to develop long term relationships with the vineyards he works with.

“When you see X vineyard has their wine made by Defined Wine then you know there’s an implied quality level, and hopefully that will persuade you that it’s a wine worth drinking,” he said.