Ahead of this year’s André Simon Food and Drink Book Awards, db is running extracts of all of the shortlisted drinks titles. Next up is Intoxicating: Ten Drinks that Shaped Australia by Max Allen. 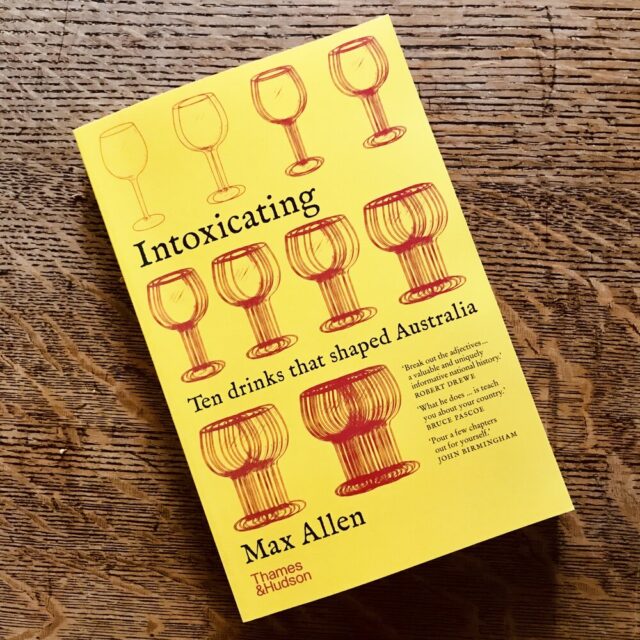 Oz Clarke places a forty-year-old bottle of Coonawarra shiraz gently on the table. He’s been waiting a long time to open this. As he picks up his corkscrew, he sees my smartphone.

‘Do you want to video this?’ he says.

Of course I do. I’ve travelled all the way to Putney in South London, to the house of one of the world’s most famous wine writers, for this moment, to share his last remaining bottle of 1978 Kanga Rouge, a serious wine with a silly name made at a time when Australia’s reputation in the rest of the world was at an all-time low. It’s probably the last remaining bottle in the world. I absolutely want to document it for posterity – or at the very least post it as an Instagram story. I pick up my phone, open the camera app, tap record and Oz slips immediately into performance mode.

‘This’, he says, grabbing the corkscrew and looking straight into the phone’s tiny lens, ‘is a moment that has got triumph and disaster writ large upon it in pretty much equal measure …’

And with that, the decades disappear.

It’s the late 1980s. I’m living in a share house in Brighton in the UK with a bunch of art students and dreadlocked anarchists. Being twenty-year-olds living in a share house, we spend a lot of time watching TV. And because I’m beginning to nurture an interest in wine – the taste of that formative Brown Brothers late-picked muscat still lingering on my lips – one of the programs that appeals to me more than to my housemates is Food and Drink on BBC2.

Food and Drink was a television phenomenon in the 1980s and early 1990s. Millions of viewers tuned in each week. The show had two wine presenters, both bursting with enthusiasm for the bottles they tasted and recommended: a posh-sounding curly-haired woman called Jilly Goolden, and a mischievous balding bloke called Oz Clarke. The pair were becoming household names thanks to the often colourful, sometimes ridiculous way they described wine. Many people dismissed the flowery language as an entertaining load of old twaddle. But I was fascinated by it. I was inspired by the way wine could evoke such outbursts of emotion.

As well as appearing on TV, Oz wrote about wine for newspapers and published an annual wine guide. I bought the 1989 edition when I got my first job at a high street wine shop, and it became a bible for me. (I still have it, dog-eared, well-thumbed.) I loved the way Oz wrote: conversational but comprehensive, entertaining but educational. I consulted his guide to help me buy wines, and when I started keeping a notebook, writing descriptions of the wines I was tasting and drinking, consciously or not I emulated Oz’s style. In many ways, I still do.

A couple of years later, in 1992, I worked on the International Wine Challenge, a huge competition, in London – opening boxes, cleaning glasses, emptying spit buckets – and I met many of the UK wine writers, including Oz, all of whom appeared to be having a great time doing what they did. It was an experience that encouraged me to start writing about wine when I moved to Australia.

And now, almost three decades later, here I am watching a seventy-year-old Oz Clarke on my phone screen as he slowly, gently eases the cork from his dear, darling, much-loved last bottle of Kanga Rouge.

‘Oh, I can’t believe it’s coming out,’ he says, building up the tension for the camera. ‘I’m sort of wondering, how much further can I dare go? I think it might be time to give it a pull.’

The cork comes out in one piece and Oz smiles proudly.

‘Okay, what colour is it going to be?’ he says as he reaches for a couple of glasses and begins to pour.

The wrong colour, unfortunately. The wine is a tragic muddy brown, a clear sign of oxidation. Oz groans and laughs through gritted teeth.

He brings one of the wineglasses up to his nose and inhales deeply. The clenched smile becomes a grimace as the dreadful oxidised aromas claw at his nostrils. The wine’s fucked.

‘Ah, ah, see,’ he says, smiling painfully into the lens. ‘They don’t make sherry like this anymore.’

Reprinted with permission from Intoxicating: Ten Drinks that Shaped Australia by Max Allen. Published by Thames and Hudson in July 2020.