Born in Lyon in 1972, having worked at Alain Passard’s L’Arpège and Alain Ducasse in Paris, Bosi moved to England in 1997 and set up Hibiscus in 2000 in the Shropshire market town of Ludlow. He relocated his restaurant to London’s Mayfair in 2008 after Hibiscus gained two Michelin stars. Moving beyond the world of fine dining, in 2011, he opened The Fox & Grapes, a gastropub in Wimbledon, with his brother Cedric. In 2017 Bosi joined the late Terence Conran’s revamped Bibendum on the Fulham Road and swiftly scooped two Michelin stars for his classic French cooking with a contemporary twist. 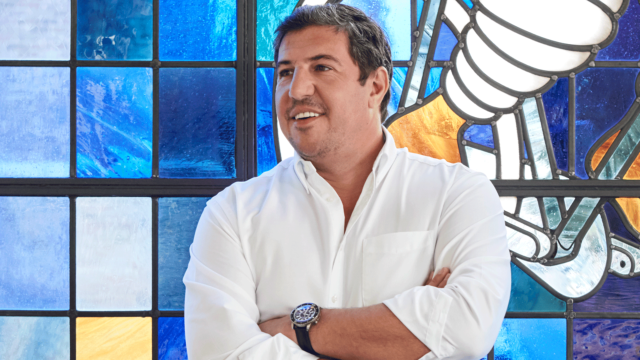 Homemade potato gnocchi that my grandma, mum and aunt used to make at Easter. I have memories of sitting around the kitchen table, and this dish being an integral part of that family time, that have stayed with me ever since.

When I was younger, I didn’t really think about becoming a chef. But after I finished school and my parents being in hospitality already – they owned and ran a family bistro – it felt like a natural choice.

That’s a really hard one to say. But for me, any dish that our customers ask us to not take off the menu certainly makes me happy.

It would have to be a Jura wine served with a 48-month-old Comté cheese. It showcases the richness and beauty of the Jura region.

It was the first holiday my wife and I took together. We went to Italy’s Amalfi coast. We had a beautiful lunch full of local produce, and it was accompanied by one of her favourite wines, Vie di Dessimis Pinot Grigio 2008.

I was in Japan and was trying lots of different market foods. One thing I was given to try was whale, which I didn’t know about until after. It really upset me when I was told.

My mum, definitely. When we had the bistro in Lyon, she was in the kitchen and my dad was front-of-house. My mum went to the market every morning and made a menu of three courses that was different every day. They catered for about 45 people daily – just her in the kitchen plus one kitchen porter – staggering!

It’s hard to pick just one, but when I was an apprentice, I was straining a sauce for my head chef. I kept the bones and got rid of the jus. I will never understand why I did that.

Both spring and autumn. The produce available in those seasons is exemplary.

It has to be black pepper – it’s so important for flavour.

What is the best bottle of wine you’ve ever drunk and why?

A ham and cheese sandwich, packed with bacon Frazzles for texture.

Can I say anything other than French! But seriously, I love any cuisine where the produce is the star of the show.