Jewellery firm Fabergé has teamed up with The Craft Irish Whiskey Co. to release the Emerald Isle Collection, which costs US$2 million and includes two bottles of 30-year-old whiskey and a Fabergé Celtic egg. 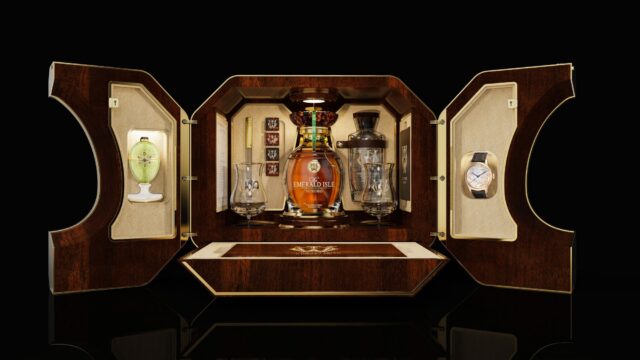 The collection is presented in a walnut box and comprises two bottles of rare 30-year-old Irish whiskey; a Fabergé Celtic egg and bespoke timepiece; a humidor with two Cohiba Siglo VI Grand Reserve cigars; a gold-plated cigar cutter; a gold plated water pipette; obsidian whiskey stones; a hip flask containing a sample of Emerald Isle whiskey; and a carafe filled with Irish spring water from the same region in which the whiskey was made.

Each set also contains a Fabergé Celtic egg, created by fourth generation enamel worker Dr. Marcus Mohr. Made from 18k yellow gold, each egg features Fabergé’s classic guilloché enamel in pastel green. The colours of the egg were chosen to represent the Irish flag. Each egg is set with a diamond Celtic knot that frames a coloured gemstone at its centre. Inside each egg is an uncut Zambian emerald, presented on a gold guilloché base with claw setting.

Jay Bradley, founder of The Craft Irish Whiskey Co. commented: “We are more than delighted to be partnering with prestigious atelier Fabergé to launch ‘The Emerald Isle Collection,’ which is an extraordinary bespoke set, and will truly put ultra-rare luxury Irish whiskies on the map. Fabergé is an iconic brand with an enduring legacy that continues to evolve and knows no bounds, so we cannot think of a better collaboration for a luxury whiskey from Ireland. This is simply a dream come true for me and the team – and an unbelievable elevation for a 30-year whiskey, which was already going to be a particularly sought-after collector’s item. With the Fabergé addition, there is surely nothing that compares for the ultimate aficionado.”

Also included in the set is the Fabergé Altruist, an 18k rose gold timepiece with a self-winding movement sourced from Vaucher Manufacture. Each watch has a different dial and boasts an etched mother of pearl face with hand-painted 24k gold flakes.

The collection was launched during a private auction in Houston, Texas this week.

Josina von dem Bussche-Kessell, global sales and business development director at Fabergé, added: “This is a thrilling partnership for Fabergé, as it sees us continuing our legacy of creating unique and collectable objects, bridging the gap between historic legacy and modern-day heirlooms. Rare whiskey has seen tremendous investor attention, and the whiskey market is undergoing a dynamic evolution. It is very exciting for Fabergé to participate in such a cross-pollination of luxury sectors, thereby adding a contemporary twist on age old traditions.”