Ahead of this year’s André Simon Food and Drink Book Awards, db is running extracts of all of the shortlisted drinks titles. Next up is Wine from Another Galaxy: Noble Rot by Dan Keeling and Mark Andrew. 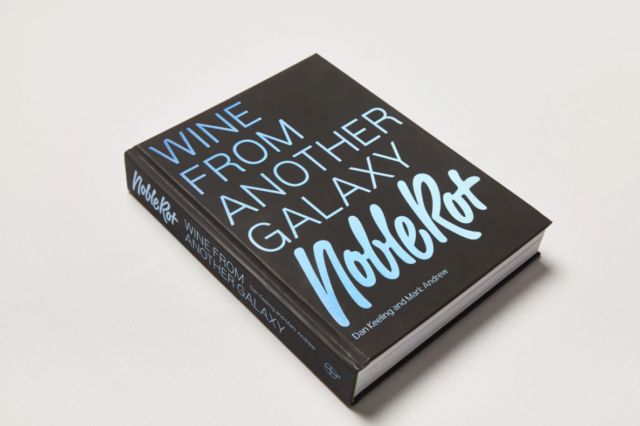 I’m not sure whether I believe in a single moment of revelation that sparks a fascination with wine. Such epiphanies often sound overly romanticised when, more likely, it’s an ongoing series of everyday illuminations that inspires vinous thirst. Indeed, as you read these words somebody, somewhere is in the magnificent shock of a wine’s perfume. Because even if you think you know that Barolo smells of roses and tar, or Chablis tastes like it has trickled through ancient oyster beds, great bottles always have an originality that begs the question: how can this be made just from grapes? But while I won’t point to one moment when wine blossomed from being just another avenue of inebriation into an eye-rolling, table-thumping, multi-dimensional, holy-mother-of-Christ-I-love-this experience, I can say that one of many powerful early insights for me was the way 2005 Ridge ‘Lytton Springs’ combined savouriness with ultra-vivid fruit.

At the time I was working in music as Managing Director of Island Records on Kensington High Street in London, having recently been enticed away from a job as Head of A&R (‘artist and repertoire’) at rival label Parlophone. Things were going swimmingly, or so it seemed. I just needed to find some new multi-million-selling talent, and fast. So, I did what any under-pressure, overpaid 30-year-old in their right mind would do, and began spending more of my time in Roberson, the wine merchant next door. Although far from knowledgeable, I’d always had an inkling, as you probably do, that there is something extraordinary waiting to be discovered
in wine, and I was encouraged in my explorations by my friend Nick Burton, who managed the shop and gave me the Ridge, and Mark Andrew, a young Mancunian he employed.

All wine lovers prize a fellow enthusiast with whom to explore precious bottles, and when on first meeting I asked Mark whether he preferred drinking Sauvignon Blanc from the Loire Valley or New Zealand, and he answered, “That’s like asking if I prefer kissing pretty girls or ugly girls”, I knew we’d become great friends. He was a little further into his vinous infatuation than I was, having fallen for a Denis Bachelet Gevrey-Chambertin a couple of years earlier, and when he began organising evening tastings of classic wines in Roberson’s basement I became a regular guest. Coche-Dury Meursault, Jean-Louis Chave Hermitage, Grange des Pères, the Léovilles and more – looking back, our old tasting sheets read like a who’s who of top domaines, and even when experienced luminaries such as Michael Broadbent or Jancis Robinson appeared in the audience, Mark hosted masterfully. This guy had more front than Blackpool Pleasure Beach. I was impressed.

Soon, we began drinking together after work. We’d pay corkage to open our own bottles at The Mall Tavern in Notting Hill, and educate our palates with a succession of benchmarks. Château Rayas ‘Pignan’, Freddie Mugnier Chambolle-Musigny 1er Cru ‘Les Fuées’, Lenoir Chinon ‘Les Roches’ – formative tastes and textures came thick and fast as we dug deeper into French wine culture. We’d devour books such as Kermit Lynch’s Adventures on the Wine Route, Clive Coates’ The Wines of Burgundy and Michael Broadbent’s Vintage Wine, then plot ways to drink the bottles they celebrated. We toasted the birth of my son Arthur with Krug 1988 – the most delicious Champagne I’ve tasted – and marvelled over Selosse ‘Substance’ while watching Bayern Munich beat Borussia Dortmund in the Champions League final. Wine made us happy, inquisitive, confused, benevolent and sad (when it was out of condition), and inspired us to start Noble Rot to chart those feelings.

After a few years of publishing the magazine the lure of the wine life proved stronger than chasing past glories in music, and Mark and I opened Noble Rot wine bar and restaurant on Lamb’s Conduit Street in Bloomsbury. While today independent publishing is a niche activity, Noble Rot has opened many doors that might previously have remained shut, and enabled us to tell the stories behind the wines we adore. From the renaissance of organic viticulture and the rejuvenation of abandoned vineyards everywhere from Mount Etna to Ribeira Sacra, to the legendary vintages of Bordeaux and Burgundy, Wine from Another Galaxy is our celebration of European wine culture. As fellow Bloomsbury-ite Virginia Woolf once wrote: “The great revelation perhaps never did come. Instead there were little daily miracles, illuminations, matches struck unexpectedly in the dark.” That’s exactly how we feel.

Reprinted with permission from Wine from Another Galaxy: Noble Rot by Dan Keeling and Mark Andrew. Published by Quadrille Publishing in October 2020.