Hollywood heartthrob Brad Pitt has put his modelling skills to good use, appearing in the latest ad campaign for his Provence rosé brand, Miraval. 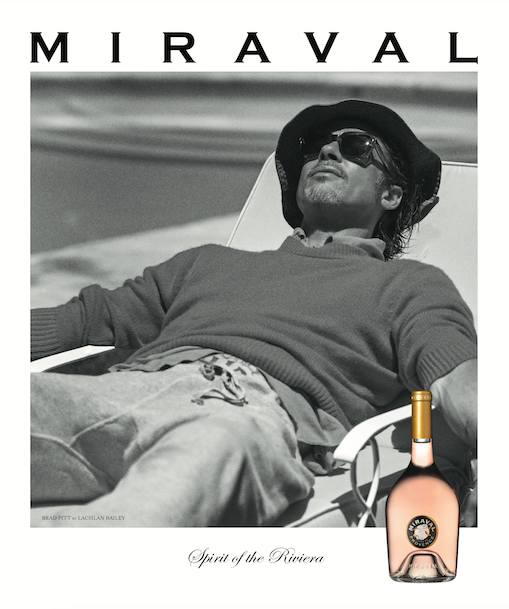 To coincide with the release of the 2020 vintage of Miraval Rosé, Pitt stars in Miraval’s ‘Spirit of the Riviera’ advertising campaign, shot in Los Angeles by fashion photographer Lachlan Bailey.

Known for his cinematic photography style, the Australian snapper captured the feel of the French Riviera by shooting Pitt poolside reclining on a sun lounger.

According to the château, the pale pink Miraval 2020 offers notes of “redcurrants and fresh roses lifted by lemon zest”. On the palate the rosé boasts mineral and saline notes, and a persistent lemony finish.

This isn’t Pitt’s modelling debut. In 2012 he starred in an ad campaign for Chanel No. 5. Keen to elevate the image of rosé Champagne, last September Pitt launched Fleur de Miraval, a £290 rosé Champagne made in collaboration with Pierre Péters.

Just 20,000 bottles of the inaugural release were made from a blend of 75% Chardonnay from Le Mesnil-sur-Oger and 25% Pinot Noir.

In 2011 Pitt and his then wife Angelina Jolie bought the 500ha Château Miraval in Côtes de Provence for a reported US$60m.

The property once belonged to French jazz musician Jacques Loussier and boasted a recording studio where Pink Floyd put the finishing touches on The Wall in 1979.

Miraval Rosé is a blend of Grenache, Cinsault, Syrah and Rolle grown on clay and limestone soils, 5% of which is barrel fermented.