Celebrity chef Gordon Ramsay has launched a range of hard seltzers in the US, including a passion fruit, pineapple and orange expression called Knicker Twist.

Due to hit US shelves in early 2021, the Hell’s Seltzer range, made in collaboration with distributor Brew Pipeline and drinks development agency Global Brews of London, features four “unapologetically bold” flavour combinations. 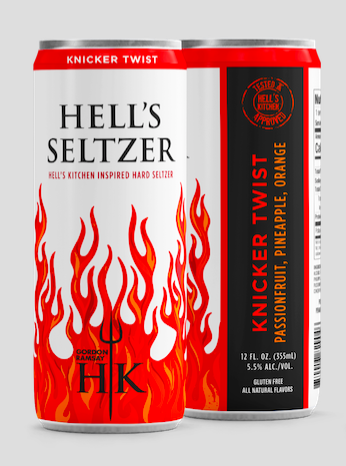 The seltzer flavours were inspired by popular menu items from Ramsay’s Hell’s Kitchen restaurants across the United States.

“That’s always been Gordon’s goal, and we think he nailed it. We’re looking forward to sharing these bold seltzers with fans across the nation,” said Steve Kwapil, CEO and co-founder of Brew Pipeline.

The 5.5% ABV, gluten-free seltzers are made with “all-natural flavours” and will be sold in 12-pack variety packs, featuring three of each flavour variant.