We caught up with Sheffield-based bartender Tom Lord, founder of Hospitality Gin, to find out the story behind the start-up, which donates all of its profits to the hospitality industry.

What started as a way of raising money for those struggling in the drinks industry as a result of the pandemic, has become a fully fledged, successful business.

Tom Lord founded the not-for-profit Hospitality Gin in mid May through a crowdfunder in the hopes of selling a few hundred bottles of gin and donating a lump sum to charities Hospitality Action and The Drinks Trust.

However, after selling over 100 bottles before the official launch of the business and featuring in restaurant critic Jay Rayner’s column in late June, garnering the company a couple of hundred more sales, original stocks sold out within less than four weeks, and Lord realised that the business had legs.

“We weren’t expecting to be in the position we’re now where we’re looking at it being a long term business with long term plans to support the hospitality industry,” he told db. “It was always supposed to be a short term single donation and then move on to other things.”

And after such a successful launch, Hospitality Gin added a second product to its range through the introduction of its Bartender Series in November.

The series, which launchd with a pineapple and green pepper gin is designed to showcase unusual and unique flavour combinations that people may not have tried before.

Lord says of the project: “The name of the idea came from something that your bartender is more likely to know about, and the longer term plan is to collaborate with experienced bartenders and get some sort of interesting cool ideas out of it.”

Lord was keen to try experimenting with pineapple, as the fruit is symbolic for the hospitality industry as a whole. Pineapple can, however, be challenging to distill, and getting the flavours perfectly balanced can be difficult.

What started out as a pineapple and chilli gin soon had to be scrapped, as the marriage of flavours was too difficult to get right, and the chilli often overpowered the fruit’s sweetness. But Lord was determined to find something that would work with pineapple.

“I honestly can’t tell you where the idea for the bell pepper came from,” he says. “I must have had a flash of inspiration as I was drinking gin.

“It was just applying what I’ve learnt through bartending, and I’ve got a huge love of cooking, and trying to see what would work together. That’s how we ended up with green pepper. Once we decided on those core ingredients it was just finding things that would compliment them.” 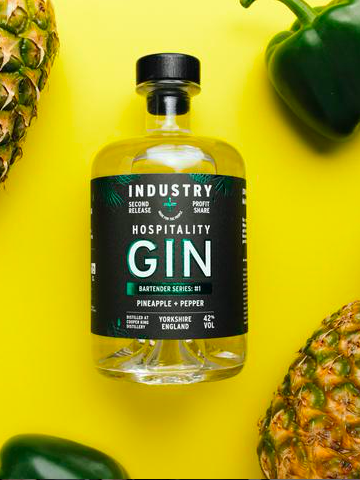 The first of Hospitality Gin’s Bartender Series seems to have been a hit, and Lord takes great pleasure in seeing how other people are enjoying the spirit online. He is especially excited to try it with ginger ale, after being inspired by someone sharing their drink over Twitter.

At its heart, this is a business designed to assist those struggling within hospitality, an industry Lord has been a part of for over ten years, and while the business may have taken off, those the gin is designed to help are still very much in need.

“I think we’re not going to be back to normal for a long time,” says Lord. “It may sound like I’m trying to be the doomsayer, but through everything I’ve taken a very realistic approach that this is not going to go away as quickly as everyone thinks.”

Lord came up with the idea for the business in the middle of the first national lockdown, and within two weeks of its inception he was ordering bottles of gin in order to execute the idea.

Hospitality Gin donates all of its profits to two industry charities: Hospitality Action and The Drinks Trust, which provide support not only through grants and funding, but also through mental health and wellness services.

As well as running Hospitality Gin, Lord was a key player in the #cancelthecurfew campaign designed to combat the 10pm curfew put on hospitality businesses this autumn.

He’s growing increasingly frustrated that the hospitality industry is being used as a scapegoat for government legislation. “Hospitality is seen as a sin industry in the same way that there’s a sin tax on alcohol and cigarettes.