US critic James Suckling has named an Argentine Pinot Noir as his ‘Wine of the Year’, in a top 10 shortlist that includes no French wine at all and no Cabernet-dominant wines. 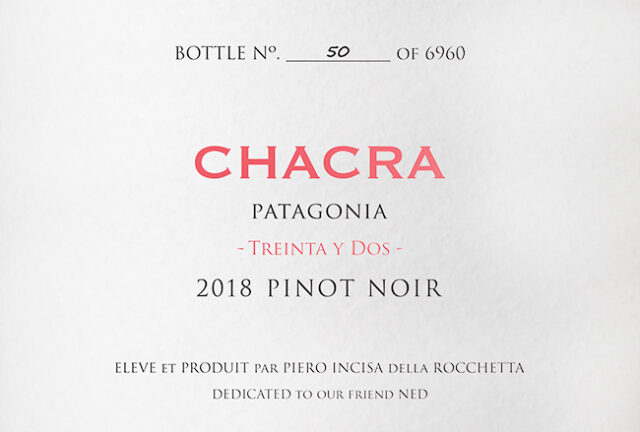 The critic’s top 10 wines include labels from Argentina, Germany, Italy, Austria, Australia and Chile – half of the white wines – an incredibly diverse selection and a reflection of the broadening view of ‘fine wine’ as a category.

Suckling’s previous wines of the year have tended to gravitate around Bordeaux, Napa or his beloved Brunellos though he eschewed these in favour of Chilean label Almaviva, the 2017 vintage of which was named his ‘wine of the decade’ earlier this year.

His choice of Chacra’s Pinot Noir ‘Patagonia Treinta y Dos 2018’ (1932 being when the vines were planted) this year then is something of a surprise, though it seems to confirm his budding love affair with South American wines.

More surprising still is the fact that he has chosen a ‘natural’ wine as well; from vineyards farmed biodynamically, with the wine aged predominantly in concrete and second, third, fourth and fifth-filled oak barrels, spontaneously fermented with natural yeasts and unfiltered prior to bottling.

Suckling explained that not only was it a “wonderful wine” worthy of its 100-point tag but that it also encapsulated a number of other points that have grown in importance in winemaking today, representing: “amazing value, environmentally responsible and sustainable production, clear and transparent character reflecting its ecosystem, and incredible drinkability”.

At just 600 cases produced this is not a widely available wine and Suckling suggested the 2017 and 2016 vintages as close peers should the 2018 prove difficult to find.

This diversity is reflected across the top 100 on the list, which is dominated by Italian, Australian, German, French and American wines (in that order), as well as Argentina, Chile, Austria, Spain and Portugal.