Scottish independent wine merchant WoodWinters has become the first retailer in the world to sell wine in a paper bottle. 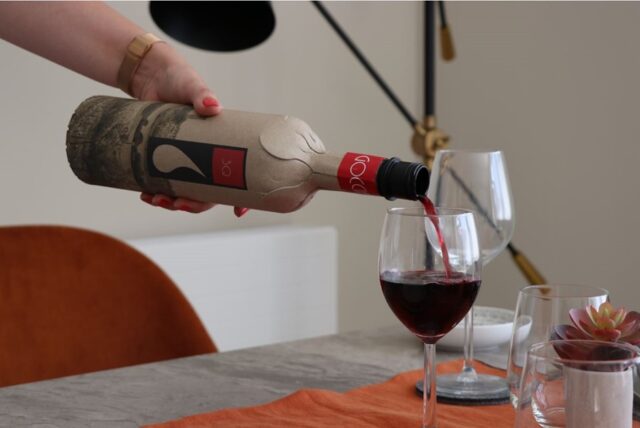 The retailer has listed an Italian red wine from producer Cantina Goccia – a lightly oaked Sangiovese with Merlot and Cabernet Sauvignon – which is packaged in Frugal Bottle, a wine bottle made from 94% recycled paperboard that contains a food-grade pouch that can hold wine or spirit. The bottle was launched by British sustainable packaging company Frugalpac in July but this is the first wine to go on sale in the bottle.

The “revolutionary” Cantina Goccia 3Q Frugalpac 2017 has gone on sale in all three of Woodwinters Wine and Whiskies stores, in Edinburgh, Bridge of Allan and Inverness (RRP: £12.50), following an online trial on its website which saw it sell out completely in four weeks.

Douglas Wood, founder of Woodwinters Wines and Whiskies, said he was delighted to be the first store in the world to sell the Frugal Bottle. “Woodwinters has always been keen on promoting innovation in sustainability so we’re very excited to offer one of our favourite wines in such an environmentally friendly bottle. We think it’s going to be hugely popular with our customers,” he said.

The retailer, which is the UK importer for Cantina Goccia and is welcoming enquiries from other retailers keen to stock the revolutionary bottle, is planning to add a white Grechetto from Cantina Goccia in a paper wine bottle next year.

Speaking to the drinks business today, Wood said the bottle “ticked so many boxes”.

“You’ve got interesting packaging as you can wrap it all they way around, and you’ve got something the customer is likely to ask about. It’s about starting a conversation – both about the wine itself, but you can also talk about the environmental aspect as well, which comes from so many angles.Yes of course it’s less weight, so less energy to transport, but it is also less weight and space in your recycling, which can be good for restaurants as well,” he said.

The Frugal Bottle is five times lighter than a normal glass bottle, weighing just 83g and making its carbon footprint up to six times lower than a regular 75cl bottle. Recycling the bottle is easy for consumers to do at home, as you only need to separate the plastic food-grade pouch from the paper bottle before recycling in your normal recylcing bin, alternatively the liner can be easily separated during the paper re-pulping process once it has been collected.

Wood pointed out that as well as using a recycled product to  start with, there was also the fact that glass manufacturing requires a lot of energy and not a lot of glass is made in the country the wine is bottled in.

“From that perspective it was new and different and I’m all for anything environmental – I’m passionate about reducing our footprint and this was just so easy to do – they did all the hard work in terms of the innovation behind it!”

Wood noted that the winery had a mentality for driving change and innovation, which matched its own.

In a statement, Cantina Goccia owner Ceri Parke said the company was proud to be making history with the “most sustainable wine bottle in the world”, which she described as a “game-changer”

“For us, the Frugal Bottle is about achieving a considerably more sustainable form of packaging for an industry crying out for innovation. It will help us decarbonise the drinks industry,” she said.“We passionately believe this is a real game changer for the wine industry, and we can see a future when 80% of all wine consumed will be from a paper bottle.”

She added that many of their hotel customers thought that the bottles would be well received in the hospitality sector.

“It’s much lighter than glass, easier to transport and friendlier to the planet. Just as important, our wine still tastes as wonderful in a paper bottle as it does in glass.”

The bottle’s Ipswich-based manufactures said they had been “inundated” with enquiries from across the drinks trade around the world who keen to cut their emissions and appeal to a new audience of consumers interested in sustainability..

In the run up to COP26 , which will be held in Glasgow next year, the UK government’s Department for International Trade’s Great Britain campaign praised Frugalpac saying it was a UK organisation “doing incredible things to help build a global sustainable future”.

Frugalpac chief executive Malcolm Waugh said it was fitting that Scotland, which aims to have a net zero carbon emissions by 2045, was the first country in the world to stock the Frugal Bottle.

“Since the Frugal Bottle launch, we’ve been inundated with enquiries from around the world, from brands, bottlers and retailers, including whisky producers. There’s a real possibility we could be producing the world’s first scotch in a paper bottle very soon,” he said. ““It’s clear there’s a huge demand for bottles made from recycled paperboard and with the lowest carbon footprint.”