Copper River Distillery, based in Chatham, has released its first single malt whisky made with Kentish malted barley from the Isle of Sheppey. 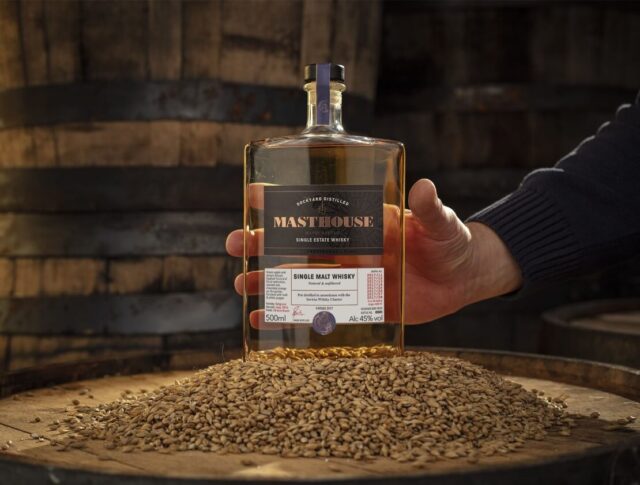 The Masthouse Single Malt Whisky is the first of a planned limited-edition release of the distiller’s core whisky range.

Described as a single estate, farm-to-glass whisky, each bottle is produced in line with the distiller’s Invicta Whisky Charter. The charter stipulates that only grain grown in the county of Kent can be used to produce Copper Rivet’s whisky, and all methods of the production process must be carried out in-house.

Produced at the distillery, which is housed in the historic pump house no. 5 in the Chatham Dockyard, the branding draws inspiration from the craft of mast-making.

Established in the mid-16th century, Chatham Dockyard boasted two mast ponds (only one survives), in which timber for a ship’s mast was submerged or ‘seasoned’ in salt water, a process which required time and patience.

Copper Rivet’s co-founder Stephen Russell said: “Among the most significant differences between Scotch and English whisky is that England’s whisky distillers are not bound to using only certain types of casks and stills. So we have a big opportunity to be creative and innovative in the way we bring flavour through. Also, let’s not forget that the weather conditions in Kent and Scotland differ significantly – for example, Kent’s climate is much warmer and drier. With Masthouse Whisky we aim to go over the top in our quest to produce a fascinating and elegant whisky which competes with the best from around the world on flavour and quality.”

Bottled at 45% ABV, the Masthouse single malt is available for pre-order from Master of Malt and from Copper Rivet’s online store for a recommended retail price of £45 per 50cl bottle. Every bottle includes details about the grain variety used, the name of the field in which the grain was grown and the barrel numbers from which the spirit was taken.

The Masthouse Column Malt and Masthouse Grain whiskies will be released over the next 12 to 24 months, according to the distiller.

IN FOCUS: ENGLISH AND WELSH WHISKY