BrewDog hides gold cans worth £15k in packs of beer

Scottish brewer BrewDog has put 10 solid gold beer cans worth £15,000 in 12-packs of its Punk IPA, with recipients also receiving £10,000 worth of shares in the company. 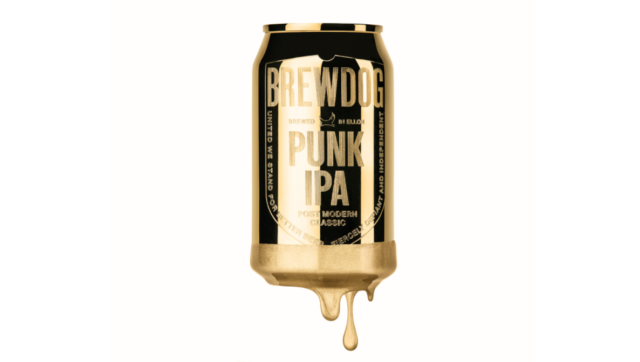 The brewer, which is no stranger to publicity stunts, announced the news on its social media channels.

Ten solid gold Punk IPA cans will be hidden in 12-packs of the beer, which will be shipped out from from the brewer’s online shop over the next four weeks.

Each can is worth £15,000 and each recipient also receives £10,000 worth of BrewDog shares and a VIP tour of its brewery headquarters in Aberdeenshire.

BrewDog’s Punk IPA 12-packs retail for £14.95 and are available via the brewer’s online store.

Dear People Of The World,

10 solid gold Punk IPA cans are hidden in Punk 12-packs which will ship from our online shop over the next 4 weeks.

Winners receive a gold can worth £15K, £10k of BrewDog shares & VIP tour of our Brewery.

Earlier this year, the brewer’s Punk IPA inspired the launch of a new product. BrewDog co-founder James Watt tweeted a mock-up of the spoof “Yaldi IPA” after someone pointed out that discount retailer Aldi’s new Anti-Establishment Beer bore a striking resemblance to the brewery’s flagship Punk IPA.

After discovering that there was already a Yaldi Brewery, Watt rebranded the beer to ALD IPA, which Aldi subsequently agreed to list.

The beer is a 4.7% session IPA, based on BrewDog’s Hop Fiction recipe.