Globetrotter Geoffrey Dean is back on the road, this time exploring the wine regions of New South Wales, from Semillon specialist the Hunter Valley to the high altitude region of Orange. 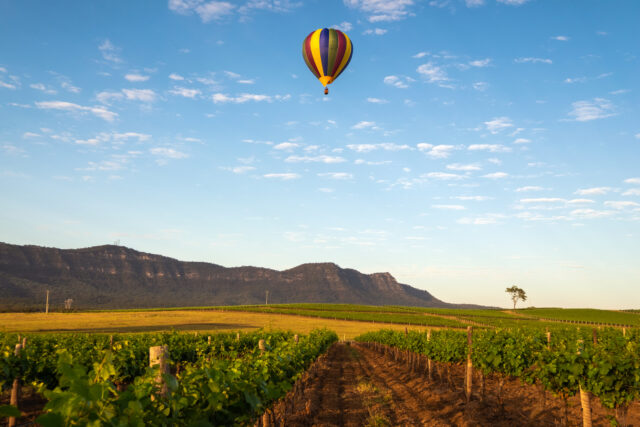 When the globe gets back to some sort of normality and travel becomes easier again, many wine tourists will doubtless return to old favourites, but for those keen to explore wine pastures new, one Australian state remains relatively undiscovered. Not the Northern Territory nor Queensland, but the country’s most populous state: New South Wales.

For, although the Hunter Valley has long attracted tens of thousands of visitors every year, other delightful regions, such as Orange, Mudgee and the southern Highlands, possess both the quality of wines, accommodation and restaurants to seduce the discerning patron. Throw in the likes of Canberra District, Tumbarumba, Hilltops, Shoalhaven Coast and Riverina, and you have a state wine circuit of genuine diversity and appeal.

Officially there are 16 wine regions in New South Wales, many of which can be taken in individually from Sydney. The best option, though, for the wine tourist with both the time and a sense of adventure, is to fit a selection in as a part of a wide sweeping circular drive, lasting anything between several days and a fortnight or more.

The route which I followed, and would happily recommend, is to start by heading south from Sydney to Bowral and the Southern Highlands; then drive in a north-westerly direction via Goulburn to Orange; go north from there to Mudgee and thence to the Hunter Valley; and then circle back to Sydney via the winemakers’ holiday haunt of Port Stephens, a gem of a destination to relax at the end of a trip.

The Southern Highlands are cool climate, as the name suggests, although they resemble somewhere like the Cotswold Hills in England more than their Scottish namesake. Bowral and Mittagong are two lovely old historic towns to explore the region from, with the dozen or so local wineries within commuting distance.

At all of them, there won’t be much, if any, 2020 wines made owing to smoke taint from the bushfires, but plenty of back vintages are available for tasting. Joadja, the oldest winery in the region, having been established in 1983, is worth a visit, as is Artemis, which has a similarly relaxed cellar door atmosphere.

Centennial Vineyards is a more formal setup, with a smart restaurant and shop to complement its wide selection of good wines. The Tertini Wines cellar door should not be missed, housing what I thought the best and most interesting range of wines in the region. This includes not just Pinot Noir and Chardonnay but also Italian varieties like Arneis and Lagrein.

While the Southern Highlands wineries have the advantage of altitude – Tertini’s being at 675m – Orange boasts the highest vineyards in Australia: some over 1,000m, although winemaker David Lowe’s site, at Nullo near Mudgee, is as high as 1,100m. The resultant higher natural acidity levels, and with them greater freshness, are hallmarks of Orange’s wines along with minerality from volcanic soils.

Fruit quality is also exceptional, as is the cellar door experience, and when you add in the appeal of the beautifully laid-out town of Orange, with its many historic buildings, you have the ingredients for a most enjoyable stop-off of several days.

Most of the wineries are west of Orange, but one that should not be missed to the southeast is Patina, whose cellar door is open at weekends only. The stunning gardens there are well worth a stroll through.

Naef is the first to admit he has learnt much from his good friend Philip Shaw, one of Australia’s most revered producers, having twice been IWSC’s International Winemaker of the Year (in 1986 and 2000). It is Shaw that has spearheaded Orange’s rise to premier league status as a wine region after he moved there permanently in 2004.

Sons Daniel and Damian now run Philip Shaw Wines, whose cellar door offers delicious cuisine as well as a food-and-wine pairing tasting. Philip himself has branched off to make his own super-premium range called Hoosegg at his nearby Koomooloo Vineyard.

Just down the road from Koomooloo Vineyard can be found the Heifer Station winery, which last year won the gold medal for tourism from Destination New South Wales. The farm there still has cattle but the owners planted 65 hectares of vines a decade ago and converted an old shearing shed into an atmospheric cellar door that has proved a huge hit since opening in 2016. “We want to ensure people don’t feel out of their depth in a wine sense,” the winery’s general manager, James Thomas, said.

“We have biking around the vineyard or in a golf cart. Apart from cheese platters or lunch at the cellar door, we also do private picnics in a romantic setting, which has led to nine marriage proposals.” Heifer Station’s wines also impressed, notably their sparkling Genisse 2015 (French for ‘heifer’) and Bull Paddock Chardonnay 2018.

Another fine sparkling wine producer is Printhie, whose Swift Series of bubblies included a 2010 blanc de blancs that spent nine years on the lees. De Salis Wines are also top notch with magnificent views from their Lofty Vineyard (the highest in the Orange GI at 1050m).

The Chardonnay and Pinot Noir from it make both superb sparkling and still wines in a range through which Charlie Svenson, owner-winemaker and most genial of hosts, takes visitors with passion and enthusiasm.

No visit to Orange would be complete without a tasting at Bloodwood with Stephen Doyle. One of the pioneers of wine-making in the region, having established the winery in 1983, Doyle is one of New South Wales’ top producers with a wide range that includes Shiraz, Malbec, Pinot Noir, Chardonnay and Riesling. His wines are all very reasonably priced given their high quality.

So too are James Sweetapple’s labels at Cargo Road Wines, from whose cellar door deck dramatic views can be had for 80km towards Nangar National Park. The engaging Sweetapple, nicknamed ‘Sweetiepie’ by his fellow winemakers, grows as many as 10 varieties, including Lagrein, Barbera and Nebbiolo.

As far as Orange accommodation is concerned, The Oriana is a good mid-price hotel that is ideally situated at the western end of town for easy access to and from the wineries.

Within walking distance is the best restaurant in town, Charred, whose tasty cuisine is complemented by a wide-ranging wine list featuring the best Australian labels as well as many top international ones.

From Orange, it is a leisurely scenic drive of a couple of hours or so via Bathurst to Mudgee, another of New South Wales’ prime wine-producing regions. It is also the oldest, dating back in 1822 when the Cox family from Britain planted vines. German emigres followed them, and one of their descendants, Jacob Stein, is making world-class Riesling at the Robert Stein Vineyard.

It is well worth a visit, for apart from the wines to taste, the winery also has an outstanding restaurant named the Pumphouse along with a motorbike museum that houses a collection of classic old bikes dating back to 1926. Other top Mudgee wineries include Logan Wines, Huntington Estate, Robert Oatley Vineyards and Lowe Wines.

The latter, with the forward-thinking David Lowe at the helm, produce some of Australia’s best Zinfandel, which probably explains why their acclaimed restaurant is named the Zin House. Lowe’s wife, Kim Currie, produces delicious cuisine from their biodynamically-farmed Tinja property, over which the restaurant has glorious views.

A lovely place to stay in Mudgee is Forgandenny House, a historic B&B in overlooking Lawson Park and Cudgegong River. From there, it is an easy stroll along the river into the town centre. Named after a village in near Perth in Scotland, whence the current owners’ ancestors came, Forgandenny has three double bedrooms as well as a self-contained cottage for six.

Possessing its own tennis court within pretty gardens, and with a 50-metre Olympic pool in the park opposite, it has excellent amenities. Moreover, the Forgandenny breakfasts are legendary for their size and quality.

From Mudgee, it is a two-hour drive to the town of Pokolbin and the Hunter Valley, New South Wales’ best-known wine region. Of the umpteen wineries of note there, those not to miss include Brokenwood, Mt Pleasant, Tyrrell’s, McGuigan Wines, Audrey Wilkinson and Pepper Tree. All produce superb examples of the Hunter’s signature white grape, Semillon, which is picked early to preserve acidity and keep abv levels low, typically 11%.

Hunter Semillon is renowned for ageing beautifully with honeyed toast notes, and wonderful old library stock is generally available for tasting and purchase at wineries. Some highlights tried were Brokenwood’s Trevena Vineyard 2014. Tyrrell’s HVD 2014, from 110-year old vines, and Audrey Wilkinson’s The Ridge 2011.

Hunter Shiraz is very different to its Barossa counterparts, being much more medium-bodied than many of the South Australian big bruisers. Brokenwood’s iconic Graveyard Vineyard Shiraz 2017 showed especially well, as did Audrey Wilkinson’s the Lake Shiraz 2017 and Pepper Tree’s Single Vineyard Reserve Coquun Shiraz 2017 – Coquun being the Aboriginal name for Hunter Valley.

One other Hunter winery, Lake’s Folly, that specialises in Chardonnay and Cabernet Sauvignon must be highly commended. Rodney Kempe crafts special examples of both, although the latter also has small amounts of Merlot, Petit Verdot and Shiraz blended in. Tasting at the atmospheric cellar door is strictly by appointment, but very worthwhile, with Kempe the most engaging of hosts.

While the Hunter has a selection of places to stay, Spicer’s Guesthouse is an outstanding option, offering five-star accommodation in a relaxing location. Its excellent Eremo restaurant does contemporary Italian cuisine. ‘Leaves and Fishes’, which focuses on seafood with an Asian kick, is a scenic place for lunch, while the cosy EXP Restaurant has consistently won plaudits for its dinners. Binnorrie Dairy, which is open for visits, is a must for cheese lovers.

Many Hunter Valley winemakers have holiday homes in Port Stephens, an hour’s drive away on the coast and a ‘must’ stop-off on the way back to Sydney. A whole range of things to do and see there can be found, including quad-biking through the biggest range of coastal sand dunes in the southern hemisphere (sanddunesadventures.com.au), dolphin-spotting cruises (moonshadow-tqc.com.au) and a new koala sanctuary, opening late September 2020  (portstephenskoalasanctuary.com.au).

For world-class seafood cuisine as well as a superb wine list, there is the Rick Stein restaurant at the Bannisters hotel, which is a good place to stay.  Culinary delights also await visitors to the Little Beach Boathouse and the Shoal Bay Country Club.

All the ingredients for a boom in wine tourism in New South Wales, therefore, are in place. If it has remained something of a secret, that should change when travel eventually returns to former levels. The state’s sheer size means there will always be unexplored pockets, but there will be no better time to go than during the 2021-2 Ashes series, or the run-up to the Twenty20 Cricket World Cup in Australia, rearranged for autumn 2022.

For more information, go to: www.visitnsw.com