Boris Johnson confirms pubs and restaurants must close at 10pm

Curfews and tighter health and safety measures for bars and restaurants are on the cards this week as the UK government brings in new measures to slow the spread of coronavirus. 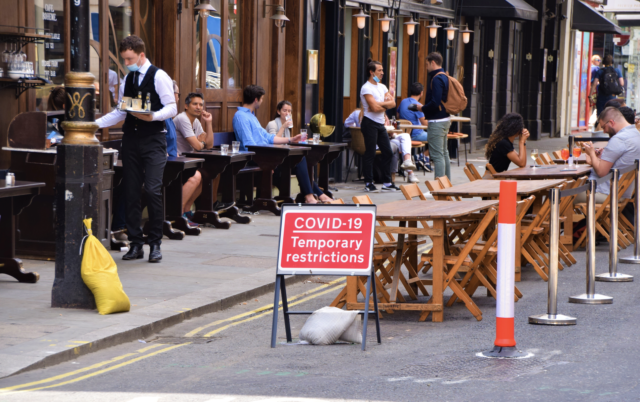 From Thursday (24 September), pubs and restaurants in England will have to close at 10pm as part of new rules the UK government is setting out to slow the spread of coronavirus. Boris Johnson has announced the measures to the House of Commons today, and is expected to address the nation in a public broadcast at 8pm.

The restrictions could be in place for as long as six months if the R-rate, the level at which Covid-19 is transferred from person to person, doesn’t fall below 1.

“We reserve the right to use significantly greater firepower and greater restrictions,” Johnson said.

Scottish First Minister Nicola Sturgeon, London mayor Sadiq Khan, and Wales’ Mark Drakeford are all set to address the public this afternoon, and will spend today in briefings to ensure all ministers give a cohesive line.

Other measures set to come into effect will be making table service a legal requirement for venues to reduce contact between customers, making masks mandatory for staff, and imposing fines for those that do not enforce a two-metre distance between tables. People will also be required to wear masks in venues unless they are seated at their table.

Until now, these were all approaches the government advised, but did not legally enforce.

It comes as the UK has turned a corner for the worse with Covid-19. The government’s chief medical advisors have said the country is now on track for 50,000 new coronavirus cases per day by next month. The government made it illegal to gather in groups of more than six earlier this month, with some exceptions for weddings and funerals. Fines beginning at £200, reaching £3,200 as a maximum for repeated offences, would be issued to those failing to comply.

Curfews for bars and restaurants have already been imposed in cities like Bolton after they recorded surges in cases. Now, however, Johnson is bringing in a country-wide ban on serving after 10pm.

The government has taken the stance that “young people” breaking social distancing rules and socialising are helping to spread the virus. It is hoped placing a curfew this will prevent

But the prospect of a curfew has stirred anxieties across the hospitality sector. Restaurant and bar owners have said the majority of their takings come late in the evening, while others have pointed out closing

Gary Usher, the chef-owner of Chester restaurant Sticky Walnut, said that taking off the last two hours of dinner service will mean his sales could fall by 50%.

I’m not sure the general public appreciate what closing at 10 means.
Most places do fuck all at lunch.
Our restaurants might do 6 at lunch on a Friday & 86 in the evening.
It’s not knocking a mere 60 minutes off. It’s saying our last booking is now 8pm.
It’s another 50% gone. https://t.co/bbSeBi6wrB

“It’s not knocking a mere 60 minutes off. It’s saying our last booking is now 8pm.”

Emma McClarkin, the chief executive of the British Beer and Pub Association, said the curfew would “devastate” an already struggling hospitality sector just as relief measures such as the furlough scheme and rent moratoriums are set to end.

“During the current circumstances every hour of trading it crucial to the survival of pubs – for many this curfew will render their businesses unviable.”

She said the pub-owners need access to sector-specific support measures such as another furlough scheme, a beer duty freeze, business rates holiday and extended VAT cuts if they are forced to close by 10pm.

Although many businesses have adapted to table service, James Calder, the chief executive of the Society of Independent Brewers (SIBA) has said that smaller community pubs cannot afford to hire more staff to accommodate it “so will be forced to shut.”

“Existing measures have proven to work and this new rule should be enforced flexibly, because it’s benefits will only be marginal.”