As this year’s harvest in Champagne comes to an end, it will be remembered as one of the most unusual vintages ever, featuring extremes of heat and yield, as well as face masks and fantastic wines. 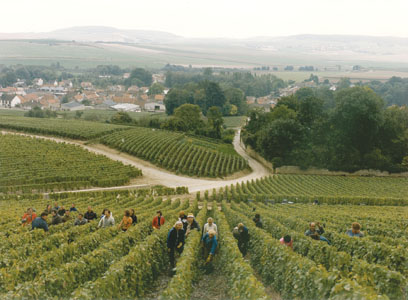 Notably, the 2020 harvest in Champagne was the earliest on record, with picking commencing officially on Monday 17 August, although there are reports of some growers starting even earlier, with special allowances made by the Comité Champagne for specific cases, meaning that a start-date of 13 August has been documented.

However, as Champagne Mumm’s new cellar master, Laurent Fresnet told db on Friday, just one day after harvesting had finished for his team of pickers, an August start date is now becoming the norm in Champagne, with this years’s vintage being the sixth time this century that picking has begun in August – the others being 2003, 2007, 2011, 2015 and 2018.

“Now, the unusual harvest is one when the picking finishes in October,” he commented.

But what about the quality of this year’s vintage? For Fresnet, it is assured, comparing the high standard of fruit in 2020 to a previous, recent and celebrated harvest.

“It is close to 2018 in quality, but we don’t have the quantity,” he said, mentioning this great, but also bountiful year.

In contrast, 2020 will go down in history as one of the lowest-yielding harvests this century, similar in that regard to the 2003 heatwave vintage.

As previously and extensively reported on by db, the Comité Champagne – which strictly regulates the yields of the region – set an unusually low cap on the amount of grapes that can be turned into wine for making Champagne this year. However, it was already a small vintage.

Just ahead of the harvest start-date, the Comité Champagne set a limit of 8,000kg/ha for the entire region, with no allowance for extra grapes to be picked for making wine to be put into a ‘reserve’, making this year 25% smaller than the 2019 vintage, which itself was down more than 10% on previous, recent levels.

Such a low number was agreed upon by the growers, cooperatives and producers of the region due to the fall-off in Champagne sales due to Covid-19, with an estimated year-end decline thought to be as much as 30%, which would represent a decrease in shipments of around 100 million bottles.

However, some producers – called houses, or maisons – felt that an even lower yield of 6-7000kg/ha was desirable, as the region is already sitting on high levels of stock and reserve wine.

After all, it is these companies, which include the leading brands of the region, who have to pay for the grapes from this year’s harvest, as well as the costs of holding wine and Champagne from previous vintages, while suffering from falling incomes due to dramatically reduced sales since the coronavirus lockdowns began this year.

Indeed, Fresnet did intimate that 8,000kg/ha, which will produce the equivalent of 230 million bottles, may be too much for the current climate of Champagne consumption, even if the fizz made from this harvest won’t be seen on the market for a number of years.

But, did the artificial yield limit lead to wasted grapes? Not significantly, Fresnet explained, due to the nature of the growing season.

“It was a very dry year, and so the grapes were dried out by the sun, losing 15-20% [of their moisture content] depending on the orientation of the plot, so there was a natural reduction of the yield, which meant that we only produced around 1,000kg/ha more than the limit [of 8,000kg/ha],” he said.

Continuing, he said, “Normally, we expect 12,000kg/ha, but due to the dry and hot weather in July and August the yield was reduced everywhere in Champagne by 3-4,000kg/ha, which is why we picked everything we had in the vines, and then, because the limit was 8,000kg/ha [of grapes that could be turned in Champagne], we just selected the best for the wine.”

As for the style of this wine, due to the weather this year, Fresnet described 2020’s produce as “very concentrated, with lots of flavour; the aromas in the winery are very fruity.”

Continuing he said, “While we don’t have a lot of acidity, we do have a great balance between fruitiness and freshness.”

As a sign of his confidence in its quality, he added that this will be a year for making vintage expressions of Champagne, which are bottled to reflect the quality of a single harvest.

“2020 is a vintage-quality harvest, and while we will have to see after tasting the wines, all the lights are green for now,” he said.

As for bringing in the grapes with various controls to minimise the risk of spreading Covid-19, this made picking difficult for the harvesters, who had to work in small teams, and pick quickly.

“It’s difficult to pick grapes in 30 degrees heat wearing a mask,” he also said, commenting on a further challenge for those involved in this task.

For Fresnet himself, 2020 was challenging, as it was his first vintage with Champagne Mumm, having joined in January from the much smaller house of Henriot.

Commenting that his job was to “reproduce the Mumm style”, rather than impose his own taste on the Champagne, he added, “It is complex to reproduce this with different furniture,” referring to the new nature and scale of the winery.

He then said, as proof that he is relishing the task, “I am very excited to join Mumm, it is really a pleasure, and a new challenge.”