California’s wineries have persevered with the 2020 harvest this month in spite of devastating fires that have torn through the state. 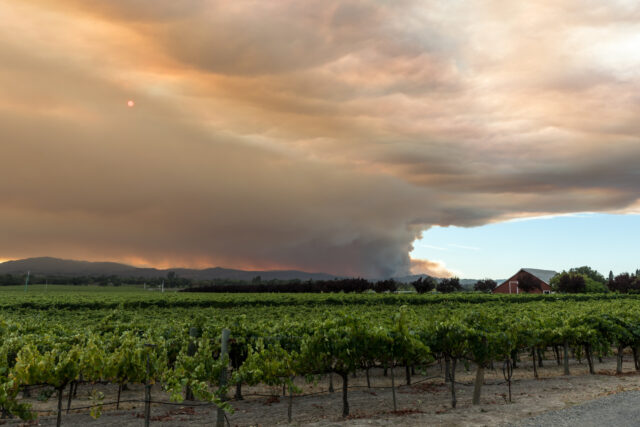 The state’s North Coast harvest is 30% complete, while inland valleys are about 50% through harvest, according to the Ciatti Harvest Report published this week, which also said that white wine grapes and Pinot Noir are mostly done, with Zinfandel and Syrah next on the list.

This year’s harvest took place against a backdrop of destructive fires that emerged across the state this month following lightning storms during an unusual late summer.

The fires erupted in remote areas of Northern California’s coastal regions, including Napa, Sonoma, Santa Clara, Santa Cruz and Monterey counties, but these are now 90% contained. Then on 7 September, another knot of blazes developed in Mendocino County which, although posing “minimal” risk of immediate damage to the state’s wineries, generated “significant high atmospheric smoke” according to trade body the California Wine Institute. At the time of writing, those fires, which cover roughly 794,800 acres are currently 30% contained.

Eight of the 10 largest fires in the states history have taken place in the last decade, while the August Complex fire burning in Mendocino has taken the record for California’s largest since records began. 3.2 million acres of land have burned this year, roughly the size of Connecticut. Meanwhile, wineries are now starting their harvest two weeks earlier than average as annual temperatures rise, speeding up the ripening process.

So far, the California Wine Institute has said their has been “minimal” physical damage to the state’s wine sector. The institute said that just two out of the 4,200 wineries in California have been severely damaged by the fire, one in Vacaville in Solano County and one in the Santa Cruz Mountains, but estates are now wary of a new threat to their crop; smoke taint. When vineyards and grapes are exposed to smoke this can result in wines with undesirable sensory characters, such as smoky, burnt, ashy or medicinal, usually described as ‘smoke tainted’, severely affecting the quality of the grapes and a winery’s ability to use them in production.

A spokesperson from the institute said it is still “too early” to measure the impact of the fires on the 2020 vintage from smoke exposure. There are still multiple factors to consider, they added, such as how low-lying the smoke was and therefore its proximity to the grapes, the base-level air quality in wine-growing counties, how far along in the growing cycle the vines were before being exposed to smoke and how long they were exposed.

Growers and wineries are now testing the grapes by fermenting small parcels to determine smoke exposure. However, there is currently a “backlog of laboratory testing”, according to the trade body, which is slowing harvest.

“Wine Institute is working to identify additional certified labs to help speed up the process.”