Deadly wildfires have ripped through Napa and Sonoma, leading to mass evacuations, destroyed buildings, and a state of emergency. 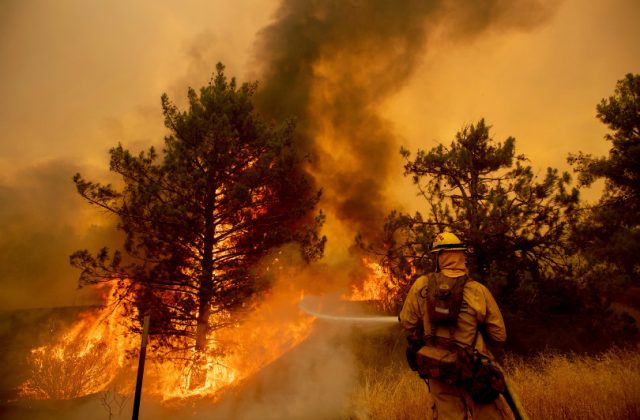 So far, three people have been killed in a wildfire raging in the foothills of the Cascade range in northern California, according to local authorities.

The so-called Glass Incident Fire, which is comprised of the Glass, Boysen, and Shady fires, started on Sunday morning (27 September) near St. Helena and has now grown to an area of 36,000 acres, according to the latest figures from Cal Fire. The blaze has destroyed a total of 113 structures and forced the evacuation of tens of thousands of people in Napa and Sonoma Counties.

Cal Fire Division Chief Ben Nicholls told media at a press conference on Monday evening that the Glass Incident tripled in size throughout the day.

Roughly 60,000 residents were under evacuation orders or warnings in Sonoma and Napa counties yesterday as winds gusting up to 55mph blew embers and the spread blazes. It is estimated that around 143 wineries are based in areas that are being evacuated.

Napa and Sonoma wineries including Charles Krug Winery, Ehlers Estate, Quintessa, Far Niente and Nickel & Nickel have all closed, but say they are so far unaffected.

“Right now, Charles Krug continues to see fires on either side of the property but is safe—as are our vineyards throughout the Napa Valley, CEO Judd Wallenbrock said, adding that the vineyards themselves have been “excellent fire breaks” and protected the main structures on the estate.

This was also the case for Reverie Winery, which is so far unscathed while the neighbour’s house was destroyed.

“We found out this morning [28 September] at 4:45 that the fire started at the 200 block of Crystal Springs and, considering our address is 264 it was a pretty scary moment, for sure,” Reverie owner Grant Long told local radio station KPIX 5.

The #GlassFire has consumed the Chateau Boswell Winery and other structures along Silverado Trail in St Helena . The fire is currently zero percent contained. #RedFlagWarning pic.twitter.com/FRiGaCrMMR

Although many have said their estates are somewhat safe, not all have been so lucky. A freelance Getty photographer captured footage of the flames engulfing famed Napa winery Chateau Boswell, when the fire was 0% contained.

Another winery, Frank Family Vineyards, closed its tasting room on Sunday due to heavy smoke conditions brought on by the Glass Fire, and has now closed the entire winery

“Many of our employees who live in the surrounding areas have been forced to evacuate, but all are safe,” the winery said in a statement.

“Our hearts are with the communities of Napa and Sonoma counties as this devastating fire tears through our neighbourhood.”

Other wineries under threat are Meadowood in the foothills of St Helena, where some structures have also been consumed by the Glass Fire.

“We don’t really know the extent of the damage but we have seen the photos of the fire there posted by first responders on social media na dare heartbroken,” Brett Anderson, Meadowood’s director of communications, told Wine Spectator. The resort is expected to give an updated statement later today.

It is not known what caused the Glass Fire, but hot and dry conditions contributed to the its spread and several additional spot fires broke out in the mountains to the west throughout Sunday and Monday, according to the California Wine Institute. The industry body said the situation remains “dynamic” with residents in Napa and Sonoma under evacuation.

“At this point it is too soon to estimate the impact of the fire on the Napa Valley and Sonoma County wine communities, however as more information becomes available we will continue to provide further updates.”

The fires will have far-reaching consequences for Californian grape growers. The grape crop’s extended and intense exposure to smoke could alter their chemical composition and make them unusable for winemaking, potentially costing millions. In a statement last week, the California Association of Winegrape Growers said they face “unprecedented losses” from the west coast fires. The association, together with nine other wine industry groups, is requesting an extension to the Wildfire and Hurricane Program Plus to cover losses incurred as a result of the 2020 wildfires.

This fire is one of 27 that have burned through California since the end of August. Since 2020, 8,100 wildfires have burned 3.7 million acres in the state, making this year’s wildfire season, once again, the largest in California’s history.