A spirit that uses the droppings from silkworms as one of its key ingredients has been launched in Japan. 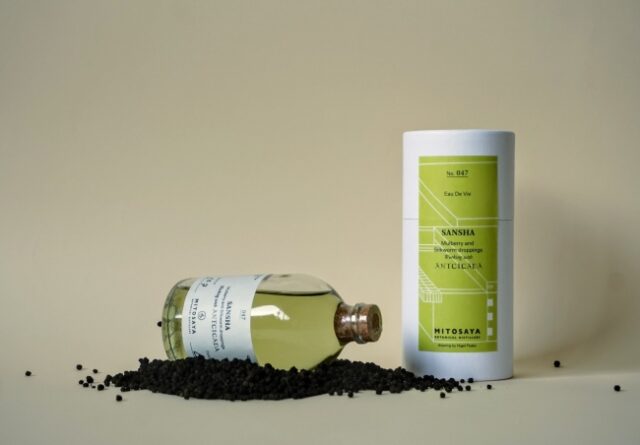 The spirit was co-developed by Antcicada, an experimental kitchen exploring edible insects, with The Mitosaya Botanical Distillery.

Based in Tokyo, Antcicada announced the launch of the unique spirit, which is called “Sansha”, referring to the silkworm droppings which are believied to have medicinal benefits in China.

This is a cross venture with The Mitosaya Botanical Distillery, which is a specialist in producing spirits made from fruits and botanicals.

Antcicada claims that silkworm droppings have been traditionally used in Chinese medicine since ancient times. It is believed to improve blood flow and relief pain in joints and the abdomen.

The team only sources droppings from cultivated worms in a silk farm that has been located in Yamanashi prefecture for over 150 years.

The droppings also contain undigested mulberry leaves, which the silkworms feed on which apparently contributes a refined aroma reminiscent of the plant.

Using mulberries and silkworm droppings as the two major ingredients, the product starts with the fermentation of organic mulberries with rice spirit to form a ‘brandy’, followed by the addition of dried silkworms droppings before proceeding to distillation. The final ABV of the product is 42%.

According to the producers, the product shows fresh scents of gyokuro green tea, prune and seaweed, blended with the elegant aroma of mulberry and a subtle sourness. The refreshing palate makes it a good pairing with desserts.

The sale of the product on the online shop of The Mitosaya Botanical Distillery began on 26 July and the response has reportedly been so overwhelming that it is currently out of stock.

Antcicada is a group of adventurous young people who are keen on inventing insect cuisine. In June 2020, they opened a restaurant in Tokyo serving the ‘Cricket Ramen’ as the signature dish. Previously, they have also created a craft gin made with giant water bugs and beer brewed with crickets.