Restaurant and winery workers across South Africa turned out in force to put pressure on the government to allow alcohol sales for sit-down venues.

The protesters have also called on a current curfew to be pushed back from 9pm to 10pm, and to resolve delays in relief payouts that have been promised by the government.

Protesters took to the streets on Wednesday 22 July with placards that showed how many people worked in their business, and now risk losing their jobs due to the country’s extended lockdown, with the slogan #Jobssavelives.

Ross Sleet, owner of Rascallion Wines, was one of the many wine producers joining the protests in Stellenboch.

“We view the value chain of restauranteurs as part of our industry,” Sleet told the drinks business, “and that they can’t sell our product affects us as much as they are affected.”

Addressing the nation on 12 July, President Cyril Ramaphosa said domestic alcohol sales would once again be banned in order to free-up hospital beds occupied by those suffering from alcohol-related traumas. There is also a night-time curfew between the hours of 9pm and 4am, and masks must be worn at all times while in public places. 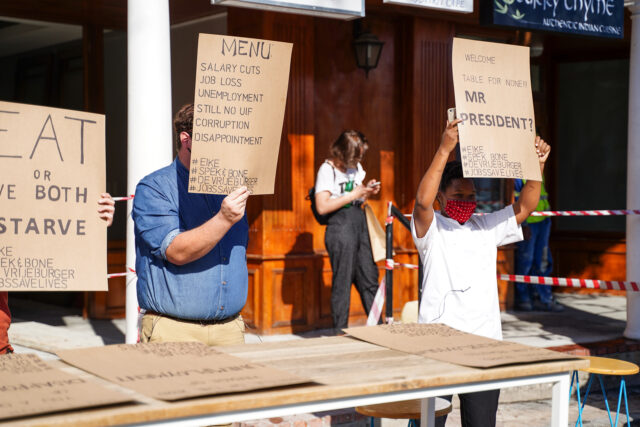 A spokesperson for the country’s Restaurant Collective told South Africa’s Sunday Times: “People are fed up and feel they have to do something. Things are going badly because people are not yet excited to go out. Unemployment means a lot of the population cannot afford restaurants. There is no support to help the industry. The sit-down restaurants are worst affected. A lot of what’s going on is no-one’s fault.”

The spokesperson added that 40% of restaurants have not received any form of government loan or support.

Sleet said navigating lockdown, being unable to sell wine domestically and applying for government relief packages and getting nowhere has been “challenging, to put it nicely”.

“If you take a sane rational view of why alcohol has been banned we completely understand it…but it’s a sledgehammer to crack a walnut.”

“Yes it’s some pressure taken off the health service and there are obviously issues around alcohol, but the lack of consultation it just seems a little but heavy-handed and misguided.”

Some protesters laid out tables to demonstrate the empty seats in South Africa’s restaurants, as well as enable social distancing during the day.

Sleet said that more than one million jobs could be on the line thanks to the lockdown rules.

“Look at chefs, waiters, parking attendants, cellar workers, courier companies. To put a million jobs at risk let alone the risk it’s having on the Fiscus and tax not being collected, it doesn’t seem to be a well thought out strategy.”

While domestic sales and drinking in restaurants is forbidden wineries are still able to export. Industry leaders have called on people to support South Africa’s producers and drink their wine, as part of a social media campaign called #drinksouthafrican.

But Sleet said that isn’t so easy for everyone.

“It would be nice if we could click our fingers and export, but saying you can export and ability to do so are two different things.”

“We have a small order going to Japan, but it’s taken four weeks to just get that order onto a boat.”