A micro-distillery in the UK has had its products de-listed from two outlets after the founders made a “vile” joke about protests in the US to promote one of its gins. 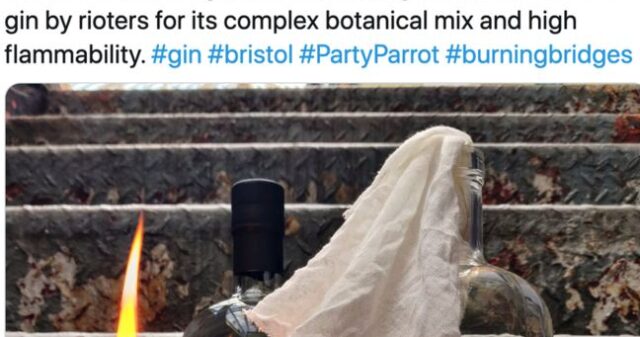 Now, the company has told the drinks business it has contacted Black Lives Matter, the human rights movement at the heart of the campaign, to “better understand the situation and ensure that we are better educated.”

It all started on Monday 1 June, after days of protests across the US sparked by the murder of George Floyd by a now-fired police officer. Some 40 cities around the country have issued curfews, and footage across social media shows instances of excess force and tear gas being used to subdue crowds, as well as looting.

Bristol Gin posted an advert for a 75% ABV gin on Twitter that day, referencing a tweet by Donald Trump about “shooting and looting”.

The post said the gin was “voted no 1 by rioters for its complex botanical mix and high flammability”.

Thanks for your support, Bristol. Due to an earlier post brought to our attention, we have now removed a supplier from the Bristol Pantry. The current events involving police brutality against black people shouldn’t be used for marketing purposes, it’s not right or acceptable.

Tom Harvey, co-founder of alcohol marketing agency YesMore, told the drinks business the post broke the UK’s advertising standards regulations due to the fact that it linked alcohol and violence.

Harvey said the post was “somewhat crass and screams of either desperation, naivety, or seriously poor judgement.”

“It is controversy for controversy’s sake – and less ‘rock star controversial’ and more Katie Hopkins desperately clutching for something offensive,” he said.

“This breaks CAP Code rules by linking alcohol and violence, as well as condoning anti-social behaviour, so it’ll likely be reprimanded for doing so. And if someone complains and the panel rule in favour of the complainant, then Bristol Gin may end up on the ASA Ad Alerts.”

Initially, the company attempted to joke about the backlash with upset commenters on Facebook, but later issued an apology on Twitter, which still referenced the name of the gin. This, again received widespread criticism.

The company issued a statement to Bristol Live on Monday which said: “We would like to formally apologise for a post made earlier this evening in which a phrase used by Donald Trump in a recent tweet was turned around to say ‘when the shooting starts, the looting starts’

However, many readers headed straight for Bristol Gin’s “about us” page, which contained, among other things, the following excerpt:

Bristol Gin told db it has now taken down the page “as it was badly edited and needed revising.”

In a follow-up post on Wednesday morning, the company said: “We are genuinely sorry for causing offense (sic) with our insensitive tweet.”

“It was a misjudged attempt to make a joke about a very serious situation. We got it very badly wrong.”

“We fully understand that the events and outrage, following George Floyd’s death, are momentous and far reaching.”

“All of us at the company are determined not to make a similar mistake again and we will be working hard to make a positive contribution.

“We will also be fully reviewing how we use social media. This will not happen again.

“We are all truly sorry.”

A spokesperson for Bristol Dry Gin told the drinks business also said the founders have now made contact with Black Lives Matter to “better understand the situation and ensure that we are better educated.”

“All of us at the company are determined not to make a similar mistake again and we will be working hard to make a positive contribution.”

The distillery is known for courting controversy. It released a 75% ABV vodka named Novichok in 2018, days after a woman and her partner were poisoned with the same nerve agent that almost killed former Russian spy Sergei Skripal and his daughter Yulia in Salisbury.