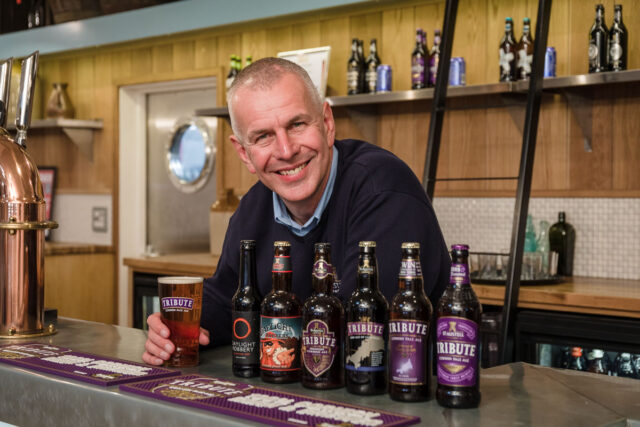 Influential figures in the UK’s brewing sector have paid tribute to Ryman, who played a key role in St Austell’s success throughout the 21st Century.

Ryman, who had worked at the brewery for over 20 years, created its flagship beer, Tribute, and oversaw the development of St Austell’s new Hare Brewery, which the brewer acquired from Bath Ales in 2016.

Ryman developed his first original beer for St Austell when he joined in 1999. Originally called Daylight Robbery, it was intended to be a limited edition release to celebrate the upcoming total eclipse of the sun.

However, the beer proved popular with UK drinkers, and became St Austell’s best-seller. The brewery relaunched it as Tribute Pale Ale in 2001.

Speaking last year, on the 20th anniversary of the beer’s creation, Ryman said: “I could never have imagined what the beer would go on to achieve when it was re-released in 2001.”

Before his days at St Austell, Ryman had worked at Maclay & Co in Scotland and Newcastle Breweries.

Ryman, who held the IBD Master Brewer qualification, was elected a Fellow of the Institute in 2014. He was twice awarded Brewer of the Year, first by the British Guild of Beer Writers in 2006, and then by the All Party Parliamentary Beer Group three years later.

Ryman passed away peacefully on Thursday (28) after a long battle with cancer.

Kevin Georgel, chief executive of St Austell Brewery, said: “We’re devastated to have lost Roger – a much-loved friend, and highly respected colleague. All of our thoughts are with Roger’s wife Toni, his father, two sisters and wider family, at this terribly sad time.

“Roger was a world-class brewer and a leader in his field, who we were incredibly lucky to work alongside. Passionate about people, he played a huge role in nurturing and developing young talent, both in our business and throughout the brewing industry. The growing reputation and quality of our beers, since Roger joined St Austell Brewery in 1999, is testimony to his hard work, leadership and passion. He will be sorely missed by all who knew him and worked with him.”

James Staughton, president of St Austell Brewery and the man who recruited Ryman, said the brewer “wowed all of us with his passion beer and brewing within minutes of his interview starting.”

“The job of Head Brewer was already effectively his, right there and then – we need not have seen anyone else. He was the breath of fresh air our brewery so desperately needed at the time.”

“He has left us all with a legacy that we will nurture and build on, as a mark of our respect for Roger and in remembrance of him. A brilliant, talented brewer and a great friend.”

The chief executive of the Campaign for Real Ale (CAMRA), Tom Stainer, called him a “hugely positive and creative influence in British brewing.”

“The beers he created won many CAMRA awards, and Roger himself was a regular at our festivals. He will be missed by all.”

“His passion, enthusiasm and knowledge was clear and he was dedicated to St. Austell and an industry who held him in such high regard. Roger was keen to pass on his incredible knowledge and experience wherever possible and to foster, support and encourage young people to take up a career in brewing.

“There will be many who will make their way through the industry with his insight and skill at the heart of their journey and there can be no greater legacy than this.”