A new AU$50 million hotel and day spa, described as a “Sydney Opera House for the Barossa”, is set to be built in the middle of a vineyard owned by Seppeltsfield winery in South Australia in 2022. 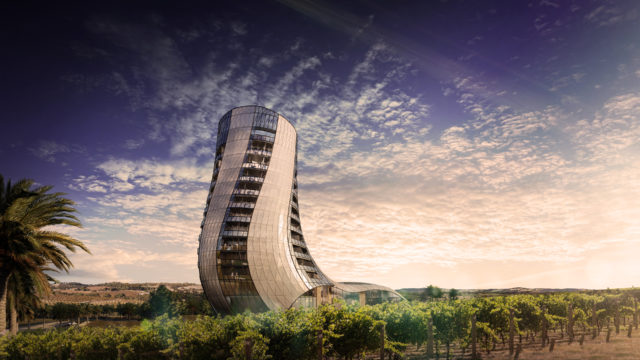 The 12-storey Oscar Seppeltsfield hotel will have 70 rooms, each with a private balcony. The design of the building, which was conceived by Intro Architecture, is said to be inspired by the history of the winery and the wine barrels in its Centennial Cellar, which contains barrels of fortified wine dating back to 1878.

It will be constructed in the middle of Seppeltsfield’s Great Terraced Vineyard, which contains 60 to 80-year-old Grenache bush vines.

The hotel is named after winemaker and viticulturalist Oscar Benno Seppelt (1873-1963), a member of the family that founded the winery.

According to a statement, the project will create 363 construction jobs and 350 “outgoing jobs” for the region, and is expected to generate direct tourism expenditure of around $19m per year or $86m over the first five years.

Seppeltsfield predicts that a total of 147,166 people will visit the attraction over first five years.

The hotel will also feature a sky bar, with 360-degree views of the surrounding landscape. The ground floor will boast a wellness day spa including a relaxation space and an infinity pool. The hotel will also offer a restaurant with a private dining room, as well as a boardroom.

Seppeltsfield owner and executive chairman Warren Randall said: “Oscar will complete the grand vision of our tourism master plan for Seppeltsfield to become the most desirable epicurean destination for tourists worldwide. We wanted to create a national icon for South Australia – a Sydney Opera House for the Barossa.

South Australian Premier Steven Marshall added: “I am very excited about the potential for tourism in the Barossa and across regional South Australia. This type of investment in the region will be great.”

The Oscar will join the likes of d’Arenberg’s Cube, which is positioned among the winery’s Mouvèdre vines in McLaren Vale.