Having already extolled the virtues of wine, Pope Francis has been censored by the Vatican church for declaring that whisky is “the real” holy water during a visit to a Roman priest school. 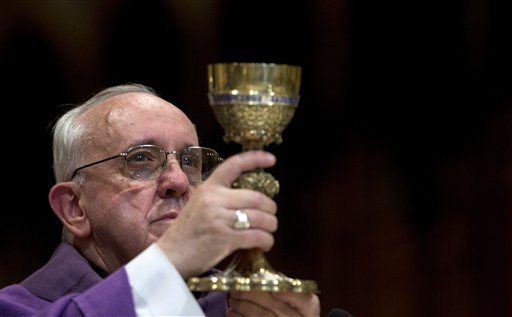 Footage of Pope Francis hailing Scotch as “the real water of life” emerged when the religious leader paid a visit to students at Rome’s Scots College last year.

The visit is due to feature in an upcoming documentary about the Scots College, but the Vatican has censored the Pope’s whisky quip, demanding it was taken out of the film, which is narrated by Daniella Nardini, before it aired on Sunday.

Director Tony Kearney followed the Scots seminarians over 18 months in 2018 and 2019, and told the Daily Record one of the students was asked to hand Il Papa a bottle of whisky.

“We filmed the students meeting with the Pope in the Apostolic Palace. One of them was tasked with giving the Pope a bottle of malt, because they know he likes whisky.

“He was really down to earth with them all and when they handed him the bottle, instead of just handing it to his assistant as he normally would with a gift, he held it up and said ‘Questa e la vera acqua santa’, which means ‘This is the real holy water.’

Kearney said the Pope “guffawed with laughter and it was a real ice-breaker with the students and put everyone at ease.”

However, the Vatican’s media office was given editorial approval over the footage. “We sent them the files and when they sent it back, that bit of him saying that was cut out.”

“We were really annoyed at first, but they insisted they didn’t want the Pope to be seen to be endorsing whisky. I think it’s quite funny how guarded his image is.”

Il Papa’s penchant for Scotch is well known. In her first meeting with Pope Francis, Queen Elizabeth II gifted him a hamper filled with the Royal estates’ finest produce, including a single malt distilled at Balmoral.

In fact, the Vatican has a history of using alcohol to connect with its flock. The Vatican City consumes more wine per-capita than any other country in the world.

In 2014, it was revealed that the Pope would use Argentine wine during Mass from grapes grown in Mendoza, San Juan, La Rioja, Catamarca, Salta, Neuquén and Río Negro.

The Pope has even declared that wine is essential to a celebration. During a public address in 2016, he spoke about the Marriage at Cana, a story from the bible in which Jesus turns water into wine after the regular wine runs out.

He connected the Bible passage with the idea that milestone moments like weddings demand copious amounts of wine.

“How is it possible to celebrate the wedding and have a party if you lack what the prophets indicated was a typical element of the messianic banquet? “Wine is necessary for the feast,” he insisted.