As many as 75,000 restaurants, bars and clubs in Italy have united in protest at post lockdown social distancing measures that could cause the closure of half the businesses in the country’s hospitality sector. 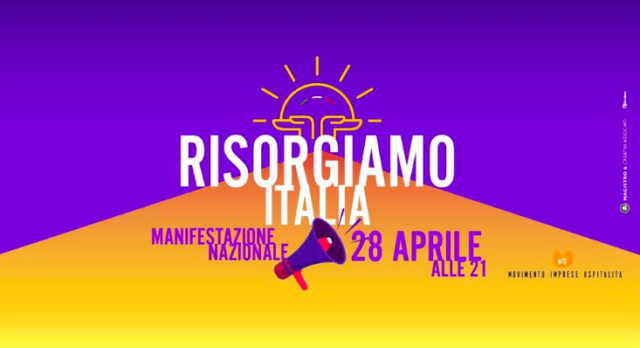 Under the banner Risorgiamo Italia (Italy rises again), a protest demonstration has been organised by an organisation called MIO (Movimento Imprese Ospitalità), which has brought together a total of 75,000 on-trade establishments.

Objecting to social distancing measures that the Italian government are enforcing following the gradual end to the Covid-19 lockdown in the country, bars and restaurants will give the keys to their businesses to local mayors on Wednesday morning this week as part of a voluntary and highly symbolic hand-over.

Meanwhile, the night before, at 9pm, every one of these outlets will turn on their lights to mark their last evening of trading.

The grievances of those who manage on-trade businesses – the majority of which are family-owned and operated – run deep for many reasons, but the essence of their frustration centres on the fact that they will be expected to trade at a loss when they are finally allowed to open on 1 June.

With proposed measures for outlets extending to wide spacing of tables and plexiglass panels to divide diners, the members of MIO mourn that they can only expect to bring in 30% of their usual turnover, while facing the same running costs.

Without changes to the rules, MIO has stated said that as many as half their members will have to cease trading altogether – and it’s a major part of the Italian economy, worth €87 billion, and employing 1.5 million people.

Furthermore, according to the organisation, with the loss of its bars, trattorias and ristorantes, Italy risks losing a vital part of its cultural fabric.

The collective concerns represented by MIO in Italy have also been raised by the drinks business regarding the hospitality sector in the UK.

For those running on-trade outlets in this country, a post-lockdown scenario of a profitable bar, pub or restaurant business with government enforced social distancing guidelines in place will be a challenging one.

Such businesses operate on tight margins, and can commonly only cover their running costs if they are close to full capacity, but with physical distancing rules ensuring a reduction in patronage, most establishments will be running at a loss.

And there’s a major worry over the length of time such physical distancing measures would remain in place. Should they be needed until a widespread effective vaccine for Covid-19 is in place, then this could represent years, not weeks, and would would require a complete rethink of floor layouts and concepts for the vast majority of businesses in the hospitality sector.

It’s why, as one operator said to db a earlier this month, the only solution for the survival of establishments in the on-trade is for governments to remove all physical distancing restrictions, while protecting the vulnerable.

In other words, the quickest way to avoid the economic problems outlined above is for nations to employ the ‘herd immunity’ approach – but it’s also deemed the riskiest to human life in the immediate future, which is, of course, why so few dare consider backing it.

With this in mind, it was particularly galling to see news this weekend suggesting that Covid-19 dies out in 70 days regardless of the methods used to tackle the virus.

Such stories were based on claims by Professor Isaac Ben-Israel, who has used data analysis to show that Covid-19 peaks at 40 days before declining, with or without interventions.

Should he be correct – although proving that would be extremely difficult – then it would mean that shutting down the hospitality sector, along with so much else during the global lockdowns, has been done for little gain.

Coronavirus a ‘9/11 moment’ for hospitality sector