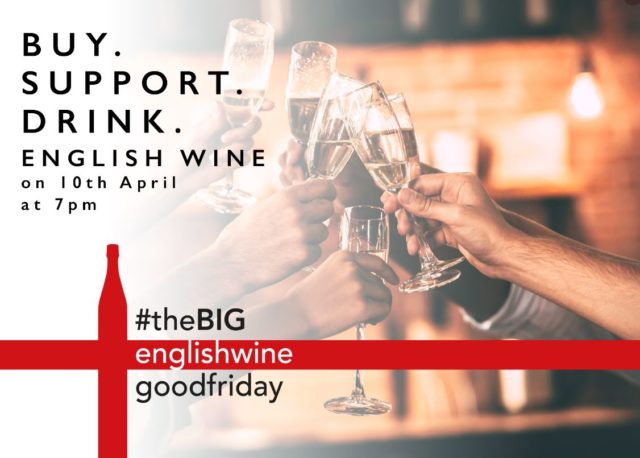 The initiative, which was inspired by a tweet by the CEO and winemaker at Black Chalk, Jacob Leadley, achieved 13 million impressions by the end of the Easter weekend. At its Friday evening peak, the hashtag was trending at number four in the UK.

The virtual event was held on Good Friday at 7pm and featured images and videos from winemakers, writers, retailers and sommeliers.

The aim was to inspire more members of the public to buy a bottle direct from a winery, or from a specialist retailer, to enjoy on Good Friday and beyond.

Many English and Welsh wineries took part, offering free delivery and special offers to tempt customers into purchasing a bottle before the Easter weekend.

Commenting after the event Leadley said he was “delighted” with the response and that he’d received multiple reports from producers who saw “significant increases” in sales in the two weeks leading up to Good Friday.

He added: “While these sales will not fix all the problems we face currently, it will mean we come out the other side a little stronger and that is all I can ask. I didn’t expect the event itself to be as large as it was; it created a positive buzz around the industry at a time of difficulty and I would like to thank everyone who helped to make that happen and took part. I think we created the largest online tasting of English and Welsh wines ever!”

Leadley said that Black Chalk saw sales increase by 295% in the two weeks before Good Friday, compared to the previous fortnight. The producer has now sold out of its rosé fizz Wild Rose 2016.

Other wineries, including Surrey’s Albury Vineyard and Kent’s Simpsons and Gusbourne also reported rises in sales.

Albury reported 70 additional orders for home delivery as a result of the initiate, resulting in almost £5,000 in extra income.

Ruth Simpson, co-founder of Simpsons’ Wine Estate, added: “We were delighted to be able to join in with #theBIGenglishwinegoodfriday celebrations. This fantastic initiative has seemed to have had a positive impact on promoting English and Welsh wines, as well as providing a sense of community and togetherness. Simpsons’ Wine Estate saw a direct uplift in sales in the lead up to the event and over the weekend too. It was wonderful to partner with fellow local producer, Chapel Down, plus our friends and neighbours at The Pig Hotel group to champion ‘supporting local’at this time.”

Charlie Holland, head winemaker at Gusbourne, added: “As result of last week’s event we have had a much higher level of engagement through our social media channels and were delighted to have received a significant number of internet orders when we returned to work after the bank holiday weekend.”

As a result of the event’s success, WineGB will be hosting Friday night ‘socials’, beginning on 24 April and focusing on a different region each week, with a chance to win a case of wine.

Julia Trustram Eve, marketing manager of WineGB, commented: “Wow! #theBIGenglishwinegoodfriday certainly captured a positive mood at the beginning of the long bank holiday weekend and it was heartening to see so many people celebrating English and Welsh wines and engaging in this collective wine tasting. People were tuning in on social media from around the world and for an hour the spotlight was on our industry and the support was phenomenal. Congratulations to Jacob for his inspired initiative and to the other very active supporters of the movement.”

HOW THE CORONAVIRUS IS AFFECTING THE ENGLISH WINE INDUSTRY