Italy under coronavirus: A report from Tuscany

Thrown in at the deep end, in a critical situation, a scenario that is changing from hour to hour, Italy’s wine trade along with the rest of the country, is fighting hard to adjust and survive under the increasing health and economic strain. Michèle Shah reports from Tuscany. 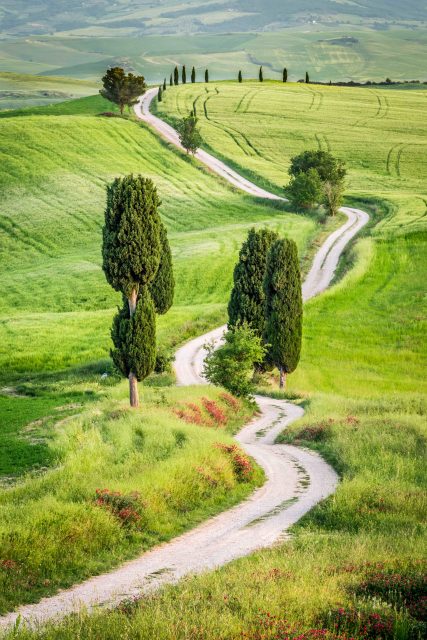 Italy was the first European country to be gripped by coronavirus and while it was hit with the initial stages of ‘lockdown’ it also had to deal with defending its food industry from defamatory remarks and requests for virus-free food and wine, as some producers in the industry had been requested to issue ‘corona virus-free’ certification for the export of its produce. Food and wine exports in Italy equate to some 50% of its production and €44 billion in export value, of which its wine business is said to be worth €6.4bn. Fortunately the EU and Italian officials were quick to pick up on this and counter-attacked with an official statement and penalty for those instigating and requesting such documentation.

Reassurance was reiterated in a statement by Riccardo Cotarella, president of the Assoenologist Association, who explained that it is impossible for the virus to survive in wine, as the combination of alcohol, the hypotonic environment and polyphenols, prevents the virus from living and multiplying. He also commented on the possible contamination of packaging is practically non-existent, considering the short life span of the virus and the absence of a potential “biological” living host. Cotarella went as far as to say that moderate wine consumption when linked to responsible drinking can contribute to better mouth and pharynx hygiene and of the areas where viruses nestle during infections.

Francesco Ricasoli, CEO and owner of Castello di Brolio winery in Chianti Classico, Tuscany, also reassured that “Unity and empathy fortunately seems to prevail. I have experienced no discrimination. Castello di Brolio continues to ship its produce all over the world, in fact, there is a strong empathy for Italian wine and the world is starting to realize that COVID-19 is a global health problem (still underestimated in some countries).” Hence Italy is not the only wine producing country and not the only one to be affected by Covid-19, so what’s there to discriminate?

But what is the Italian wine industry doing to defend their produce, and prevent the sector form falling into an economic slump? “The risk is global recession which has already started,” says Ricasoli. “Wine tourism, especially important to Tuscany is already completely blocked and what is lost is lost forever, not recoverable in the coming months. The economic and financial consequences will bring some companies to their knees.”

According to Giancarlo Moretti Poelgato, president of Villa Sandi, premium Prosecco doc/g producers in the hills of Conegliano Valdobbiadene, “The situation is difficult and changes rapidly, we are trying to think positively for when we return, slowly to normal. We had great expectations for tourism this year, as a new UNESCO World Cultural Heritage destination, but all those who booked to come to our beautiful hills here have had to cancel,” says Polegato.

Like many wine businesses, Villa Sandi is looking at different ways of re-modelling part of their commercial activities by promoting online virtual tours of the winery and the villa, a stimulus to visit or to recollect a memory of a visit, but which will never be able to replace the real experience, according to Polegato.

Most producers are offering commercial support to their customers with promotional activities to assist each customer individually. Bortolomiol Prosecco Superiore doc/g producers in Valdobbiadene will continue to supply customers where possible and are implementing where necessary flexible deadlines on payments.

Innocente Nardi, president of the Consortium Conegliano Valdobbiadene Prosecco Superiore DOCG assures that a regular flow of Prosecco Superiore is being shipped off to shores further afield. While individual wineries are still shipping out pallets of Prosecco, the Consortium has strengthened its activities by keeping a watchful eye on the changes in individual markets and by organising social campaigns and webinars to meet individual market needs and objectives, in order to maintain their presence in markets with press and consumers alike. With almost 400,000 visitors annually Conegliano Valdobbiadene Prosecco Superiore wineries have implemented various strategies to connect with their ‘affecionados’ including shipping wines to customers though e-commerce and bringing customers up to date with their news through interactive websites.

Interactivity has spread fast though Italy’s social network. At times emotional, as only Italians can be, there have been some compelling tweets, Facebook postings and Instagram photos to show how the Italian wine trade is counteracting the virus with hashtags such as #iobevoitaliano, (‘I drink Italian’) hosted by a long-standing popular wine-related radio transmission ‘Decanter’ on Italy’s Radio 2. Other initiatives include #iolaperitivolofaccioacasa (‘I drink my aperitivo at home’) launched by the Prosecco Superiore Conegliano Valdobbiadine DOCG, where there is a strong aperitif culture. Both hashtags invite people to share their photos of (Italian) wines they are drinking and enjoying in the ‘lockdown’.

While national deliveries and on-trade consumption is dwindling Italian wineries are still exporting produce despite some delays. How long this will last is difficult to say, as much depends on the domino effect of the closure of restaurants, pubs, shops which is happening from country to country.

According to Renzo Cotarella (the brother of Riccardo Cotarella) and CEO of Tuscany’s flagship winery, Marchesi Antinori, shipments to foreign countries are in difficulty. Transport on wheels has the additional problem of long queues, the safety of drivers and possibly the observance of quarantine.

“Our distribution includes some 100 countries and is based on on-trade sales which vary from 60% to 80%. Obviously we expect a fall, but it does not scare us,” says Gaia Gaja owner of the iconic Gaja winery in Piemonte. “Not all markets are in the same situation, some Asian markets are in a slow recovery phase. Our Asian importers have reported only a 10% drop in sales in the on-trade sector, while we are seeing that US and European markets are entering a more critical stage.”

Some wine importers in Asia are facing supply difficulties. Roberto Cioaca, who is the owner of Heritage Wines in Hong Kong with an extensive Italian portfolio, advises that all shipments whether by sea or air are delayed making it very difficult to supply the market. In January his sales were down by 60%, in February 85%, in March things are starting to improve, but are not great. “Nobody wants to discuss wines. All 5-star hotels have been running below 10% occupancy for the past 2 months and the government just closed the borders: everyone arriving gets put into quarantine. So no tourists and poor sales,” says Cioaca.

David Gleave MW, CEO of Liberty Wine, has not experienced any problems getting wine out of Italy. “Our producers have been superb, and the transporters have done a brilliant job,” he said.

“However, sales in restaurants, pubs and hotels have slowed dramatically, and are expected to cease completely next week. Asked if the UK was drinking more at home, he said, “some people are, but overall I don’t think that is the case.”

Cristian Valbruzzoli of Lyra Wine imports in California confirmed that he is still receiving imports from Italy while there are restrictions from France and other European countries. Valbruzzoli will be receiving a shipment of Italian wine in the coming days from Livorno in Tuscany. He said that people want to support Italy and people are stocking up on Italian wines to drink at home.

Another debated issue in the Italian trade is Verona’s Vinitaly 2020 – the largest and main engine of the Italian wine trade which has already been postponed to 14-17 June 2020. On April 3 the organisers will announce whether they will go ahead with the exhibition or move it to 2021. Many producers depend on this annual trade fair but others are concerned that the event will not be properly attended by the trade.

Piero Mastroberardino, the owner of the Mastroberardino winery in Campania and president of Federvini Wines Group and of Istituto del Vino Italiano di Qualità, as well as a member of Grandi Marchi, believes that the conditions due to Covid-19 are not conducive for such an event in June.

He said, “This health emergency is still exploding in many countries of the world, flights have been canceled, boarders closed and the trade has no intention of traveling in the coming months, at least not until it’s sure that we are clear of the pandemic, which seems unlikely to happen in the coming weeks.” Recently five Consortiums from Puglia banded together to voice their concerns about investing money in a lost cause, especially at a time when wineries are already being economically hit by the general ‘lockdown’.

“As for the aftermath of Covid-19, and the future of Italian wine, it is difficult to make predictions,” says Renzo Cotarella. “However, considering past crises we have got through such as the methanol scandal, the twin towers attack and the 2008 economic crisis, we have overcome these and we will overcome Covid-19. I believe that wine has a big advantage. It is pleasurable and convivial and it will always be enjoyed by people who want to share an experience.”

Looking on the brighter side according to Gaia Gaja, Italy will survive and its exports are destined to grow thanks to its competitive export prices and its excellent quality to price ratio. Gaia is fundamental in her praise for Italy, as number one in the US, where currently other European wines are penalised by a 25% tax; she is also confident of growth in Asian markets. She shares many producers thoughts: Italy was the first European country to be affected by Covid-19 and it will be the first to recover. As in all critical situations thanks to Italy’s model and its efficacy of family companies, which makes it more flexible and more inclined to make sacrifices when needed, Italy once again will prevail.