Following news that Edrington is closing its office in South Korea, new data reveals why spirits giants are struggling to sell Scotch in the region. 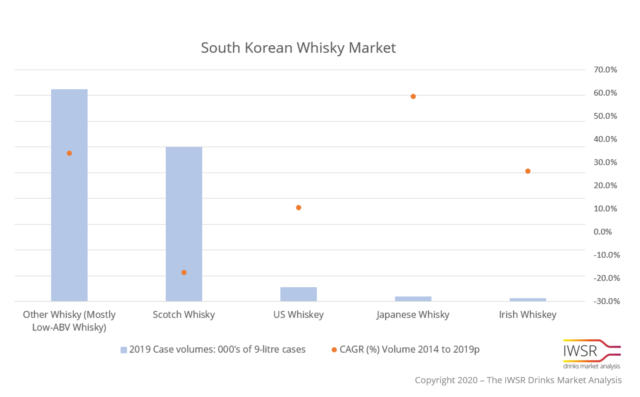 Scotch still makes up around 40% of the overall whisk(e)y market in South Korea, but large producers such as Pernod Ricard, Diageo and Edrington have struggled as sales declined over the past decade.

Pernod Ricard announced the sale of its Imperial Scotch brand last year, while Diageo announced plans to close its bottling plant in Incheon.

Since peaking in 2002, Scotch volumes have fallen by 75%, driven by declines in local brands aimed at the traditional on-trade (TOT) market, such as Diageo’s Windsor and Pernod Ricard’s Imperial.

Edrington confirmed to db it would cease its South Korean operations in March this year, though, according to Tommy Keeling, IWSR’s Research Director for Asia Pacific, this might be due to factors outside of the country’s dwindling Scotch sales.

“Edrington’s business in South Korea is focused on single malts, which is a growing category in the country,” notes Keeling.

Sales of these whiskies are driven in the traditional on-trade, in premises such as karaoke or hostess bars, but over the past 10 years, this sector has also shrunk dramatically ” due to a slower economy, stricter anti-corruption laws and a change in attitudes among younger people,” Keeling said.

“While the modern on-trade (MOT) channel, which includes venues such as high-energy clubs, western style bars and gastro-lounges, is growing, it is not at a fast-enough rate to compensate for the decline in the TOT,” he said.

As well as this, low-ABV whiskies (typically 35% to 36.5% ABV), which appeared in 2010 pioneered by Busan-based Golden Blue, have started to pick up interest with consumers in South Korea, further threatening the traditional whisky category.

In 2018, sales of low-ABV whiskies surpassed Scotch for the first time. Keeling said these products are perceived as being healthier and easier to drink, “which has made them popular with TOT hostesses who are key in driving sales in the TOT.

“While volumes have largely been restricted to the TOT, brands are increasingly bringing them into the MOT and off-trade.”