On this day 1920…Prohibition begins

On this day in 1920 the Volstead Act came into effect in the United States, beginning 13 years of alcohol prohibition. 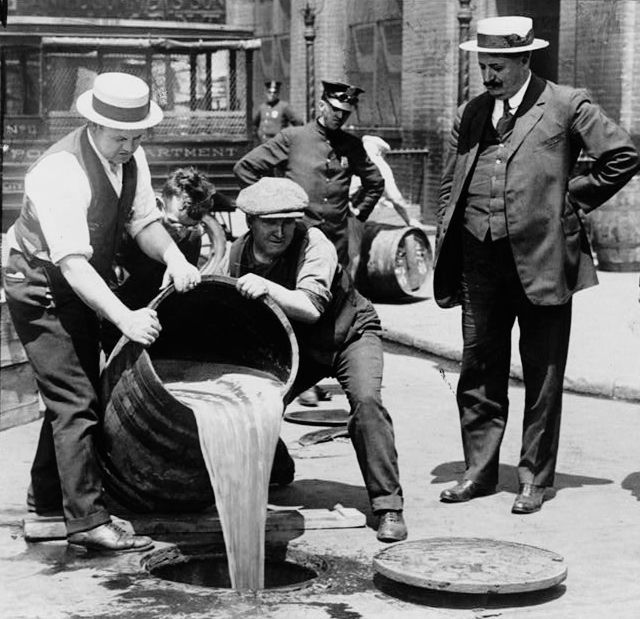 The Temperance movement in the US had grown throughout the 19th century with the majority of its adherents being devout Protestants from various denominations but Methodists were particularly prominent.

Furthermore, some of the most impassioned advocates of temperance and prohibition were in fact women. In the late 19th century women such as Carrie Nation came to prominence for going into all-male saloons and smashing bottles and bar tops with hatchets and the like while singing hymns and quoting scripture.

Having begun arguing for moderation, however, the movement transformed very swiftly into one for tee-totalism and prohibition on all alcoholic beverages.

Driven by fervent religious beliefs they may have been and somewhat comical even ridiculous as it may appear now, there were also very real problems of abuse and domestic violence being suffered by women as a result of alcohol. And there were many instances of poorer men, the chief bread winners in their families, were also spending the greater part of their pay packet on drink with their families suffering as a result.

Alcohol came to be viewed by religious groups as the absolute root cause for all social ills from workplace accidents, violence, ill health, suicide, insanity, poverty and vice. There was also, it must be said, a healthy dose of anti-Catholicism and xenophobia directed at Irish and Italians who were viewed as feckless and inveterate drunks.

Slowly but surely the various anti-saloon leagues and temperance associations gained increasing political power, its adherents coming to high office in many states (especially the mid-West) and linking up with other movements who saw the ‘liquor barons’ – big brewers and distillers principally – as out of control capitalists keeping working men in control with cheap drink and dominating the political scene in pursuit of profit.

And alcohol makers were indeed making huge amounts of money from bars and saloons which they often owned and supplied. Being predominantly German in origin however – such as messrs. Anheuser and Busch – feelings towards them cooled in the wake of the First World War and what political influence and clout they did possess waned at just the same moment the temperance movement really hit its stride.

In the early 1880s Kansas banned alcohol across the state and others began following suit until 13 had gone dry by 1914 and it became common for politicians – cynically or genuinely – to campaign on prohibitionist tickets, knowing that the Anti-Saloon League would direct its members in constituencies to vote for a candidate that espoused their cause. In the aftermath of the First World War there were prohibitionist advocates at every level of state and Federal government and with powerful, opinion-forming allies throughout society.

Furthermore, in 1913 with the introduction of a Federal income tax (the 16th Amendment) the government was not as reliant on the huge tax revenues it reaped from alcohol, which gave the Anti-Saloon League it’s opportunity.

Eventually, the Minnesota Representative and pro-Prohibitionist Andrew Volstead proposed an amendment to the Constitution – the 18th – to prohibit the manufacture, distribution and sale of “intoxicating liquors”.

Proposed in late 1917, the amendment was ratified in 1919 with Congress passing the act in October of that year with full implementation set to begin on 17 January 1920. America was officially “dry” and senator Morris Sheppard who had been a prominent supporter of the bill declared that, “there is as much chance of repealing the Eighteenth Amendment as there is for a humming-bird to fly to the planet Mars with the Washington Monument tied to its tail.”

But the Roaring Twenties the US was embarking on would be anything but dry. The age of jazz, flappers and the cocktail had begun in earnest, high society, low corruption, sexual liberation and female emancipation, moonshine and bath tub gin, the tommy gun and the mob; streets awash with bootlegged liquor, blood and filthy lucre.

“The noble experiment” would produce some contrasting results.