How to make and sell canned wine, according to the experts

The majority of drinkers in the US prefer the taste of canned rosé wines to those sold in a bottle, according to a recent study, but producers should proceed with caution if they want to cash in on the latest wine trend.

But despite the lucrative opportunities the format presents, businesses need to be prepared for a whole host of problems in their production line if they want to switch to aluminium packaging.

During a presentation on canned wines at the World Bulk Wine Exhibition on 3 December, Ana Diogo Draper, director of winemaking at Artesa Vineyards & Winery, warned that wines can become volatile and go off quickly if not made properly.

“There is still a lot of variation in the quality of canned wines that is steering consumers,” she said.

“They’re still afraid to try it.”

Draper, alongside wine writer Deborah Parker Wong and marketeer Robert Williams, spoke at the event dedicated to large-scale wine businesses such as Kingsland Drinks, offering their own insights and advice for producers who want to cash in on the trend. 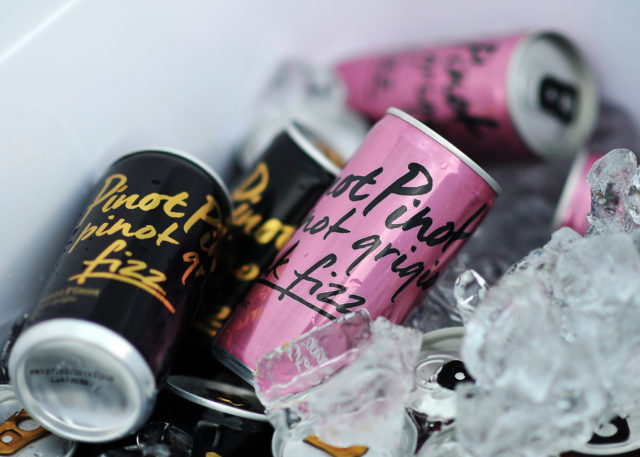 The majority of canned wines on the market are pale and fizzy.

WIC Research carried out a blind taste test with around 86 regular wine drinkers, and found that, overall, 48.5% of people preferred the taste of wine poured from a bottle, while 45.3% preferred the canned equivalent. Just under 6% couldn’t taste the difference at all.

But when this was broken down by style, 37.2% said they preferred rosé wine from a can, compared to 31.4% who said the bottled version tasted better.

The only wine style where consumers displayed a significant preference for the bottled version was Riesling. 42.9% preferred the bottled wine, compared to 31% who preferred the can, while 26.2% couldn’t tell them apart.

There were very small differences when it came to the other styles tested; dry Chardonnay, and sweet sparkling moscato.

However, Williams noted that a handful of producers are experimenting with cans for their red wines.

Larkin Wines, a winery based in Napa Valley which specialises Cabernet Sauvignon and red blends retailing at around £70, launched a range of canned wines in the UK this year, including a white blend (Sauvignon Blanc, Viognier and Rousanne), a Merlot and a rosé made from Pinot Noir.

Williams said “fruit driven, brighter style wines” such as Pinot Noir and Grenache would be “better suited for canning consumption.”

“Start in the vineyard”

Draper said canned wine has to be produced with lower SO2 and copper levels than bottled wines to ensure the liquid doesn’t react with the metal or the liner.

Having higher levels of SO2 and copper can generate hydrogen sulfide in the can, leaving consumers with a very unpleasant rotting egg aroma and cutting the wine’s shelf life down to six weeks, as opposed to a few years for those sold in glass bottles.

She said winemakers need to “start in the vineyard” if they plan to produce a wine destined for aluminium.

“A lot of bulk wines have been heavily treated with copper,” she said, but it is “fundamental if you want to can wines you have to lower this.

“It’s one of the main wine faults that’s very common in canned wines.”

She said that the threat of wines going off after a few weeks if canned is “very concerning” for an industry that isn’t used to thinking in terms of shelf life once the product hits supermarket shelves.

“When you package in bottle you don’t think of a shelf life, but if you see this shelf life, as a producer you really need to work on it.”

She added that reducing concentration of iron and aluminium would also “reduce the chance of reaction” in the can.

Once the wine is made, producers also need to work collaboratively with their chosen canning company to make sure the tinnies are tailored to their individual needs, as some wines with higher levels of acidity need thicker linings to extend their shelf life.

“It’s very important the canner should be able to test the wine and then adjust the lining required – look at the wines being canned like Pinot Grigio. The higher the acid the more layering required.”

She also suggested sending the wine off to a laboratory for analysts around two to three months before canning, “so you can rectify issues in time.”

Speaking to an audience of R&D specialists and winemakers, Draper said that the trend for packaging wine in aluminium cans is “where screwcap wine was 15 years ago.”

It is worth noting that winemakers were not the only industry insiders taking an interest in canned wine. Among the seminar’s attendees was a global technical manager at ZX Ventures, the innovation group within AB InBev.

ZX Ventures bought canned wine brand Babe in July this year, and the brewer already has six separate canned wines in its portfolio, distributing to consumers in South America.

Robert Williams, the founder of market analyst WICResearch, said that we can expect more big beer companies to invest in canned wine in the coming years, not least because it is a format they are already comfortabel working with.

“I guarantee Molson Coors will be looking into this and launching something soon,” he said.