A prominent English wine producer has predicted “a lot of casualties” in the sector as he forecasts a “massive oversupply” within five years.

During a tour of Hush Heath Estate on 17 September, owner of the property, Richard Balfour-Lynn, expressed his concerns for the future of the English wine industry based on the recent rate of plantings and current production levels, which he said were outstripping sales by a significant margin.

Speaking about a collection of new entrants with big volume production plans in the English wine industry, he said to db, “If we carry on the way we are in England, then we will have a massive oversupply”.

Continuing, he said, “People think it’s romantic [creating a wine estate in England], but it’s a science and a skill to get quality grapes in this country, and I think there will be a lot of casualties over the next years.”

Illustrating his point in numbers, Balfour-Lynn said that the 2018 vintage yielded the equivalent of 13m bottles of sparkling and still wine, while sales in the past year totalled somewhere between 3-4m bottles.

Furthermore, he recorded that 3m more vines were planted this year alone, encouraging him to comment that he expects this “massive oversupply” to appear in the next four to five years.

While he acknowledged a feeling among some newcomers that exports of English sparkling wine may provide a solution to a hugely increased production quantity, he warned against banking on a high level of demand from beyond Britain’s borders.

Commenting that Hush Heath is distributed worldwide, he highlighted the time and cost of developing a following abroad, and stated, “Exports are not going to solve the problem [of oversupply], at least in the short term.”

Having just agreed a tie-up with Sir Ian Botham to supply the wine and fizz for a joint-venture brand called Botham & Balfour – marking the cricketing legend’s first foray into English wine – he said that it was vital to “create partnerships” for long-term success.

“We have worked hard to create partnerships of a long term nature to protect ourselves against an oversupply [in the English wine industry], for example, with Saga, and now Sir Ian,” he said.

He also mentioned the need for a good cellar door operation, having invested heavily in a shop and restaurant at Hush Heath Estate.

“We know that cellar door sales are the best, and people come here, and like the authenticity – it is real,” he said, commenting that “our brand is our estate.” 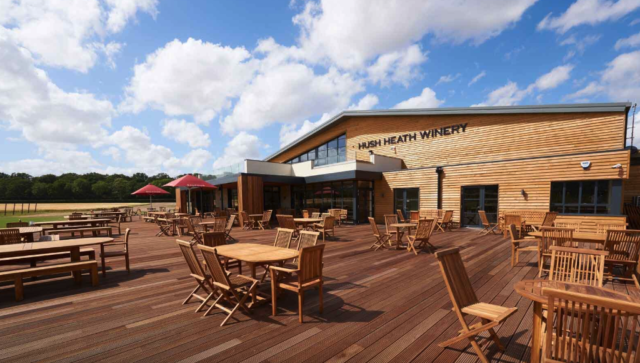 Having said that “making great wine” required “doing 300 things uncompromisingly”, he did admit that there are high costs of running an English wine estate, particularly when it comes to yields – which are significantly lower than one can reliably achieve in Champagne.

Nevertheless, he told db that unless he continues to invest in the property and the brand, then the long term survival of the operation is threatened.

“If we don’t do this, then the risks increase substantially, but you can’t look at this as a short term game, we are part of a 200 year game, we are probably where the Champagne houses were in 1800,” he said.

Finally, regarding employees at Hush Heath, which include 11 full-time workers managing the property’s 400 acres, with 100 acres of vineyards, he said it was vital to train and retain one’s own staff, particularly in the light of Britain’s impending break with the European Union.

“I just attended a business leaders lunch and everyone was complaining about Brexit, but it was clear to me three years ago that there would be fewer workers coming from Eastern Europe, so we started back then employing workers full time, and training them, and that’s the only solution: we have some from Romania, and they are here full-time; they are kept busy all year,” he stated.

Continuing, he said, “And that’s the only way to protect the quality of what you’re doing.”

As previously reported by db, three million vines have been planted in England and Wales in 2019, representing an extra 690 hectares under vine, which is a 24% increase in Britain in just one year.

This makes the UK one of the fastest growing wine regions in the world, according Wines of Great Britain (WineGB).

Among the reasons for the big growth in plantings this year is the decision by English billionaire businessman Mark Dixon – who owns Château Berne in Provence – to plant 1.25 million vines this year alone, amounting to around 300 hectares spread across several sites, from Kent to Sussex.

Furthermore, after a record year in 2018, with favourable conditions experienced throughout the growing season and no severe frosts, a total of 13.2 million bottles were produced in the UK. This trumped the previous record (6.3 million bottles in 2014) by 6.9 million bottles.

Much of the planting has taken place in the south east of England in the counties of Kent, Sussex and Hampshire.

ENGLISH FIZZ SUPPLY IS SET TO DOUBLE – BUT WILL THE DEMAND FOLLOW?

A ‘HANDFUL’ OF ENGLISH PRODUCERS MAKING A PROFIT