The Californian wine industry should prepare for wildfires to become a regular feature in the vineyard cycle, Richard B. Alley, Evan Pugh Professor at Pennsylvania State University, has said. 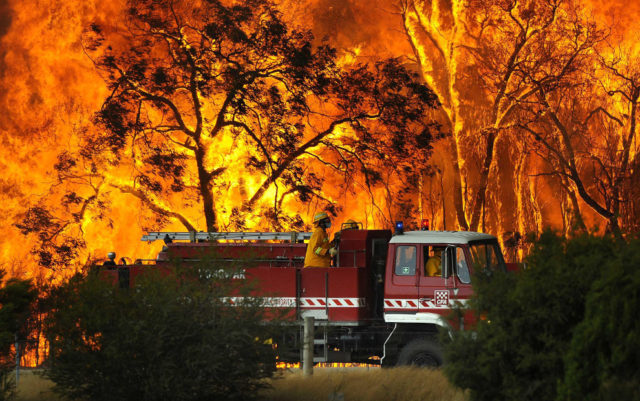 His research suggests that devastating forest fires like the Kincade Fire, which began on October 23 and tore across Sonoma County, could become a yearly occurrence.

As of November 6, the fire is over 86 percent contained, but has devastated over 31,000 hectares of vegetation and caused massive property destruction, including the Geyserville home of Julia Jackson of Jackson Family Wines.

“The evidence has strengthened that human-caused warming is contributing to drying that favours destructive fires,” said Professor Richard B. Alley.

“This trend is mainly due to an eightfold increase in summertime forest‐fire area and was very likely driven by drying of fuels promoted by human‐induced warming.”

According to Professor B. Alley, since the early 1970s California’s annual wildfire occurrence increased fivefold. He emphasised that the growing trend was mainly due to an eightfold increase in summertime forest‐fire area and was very likely driven by drying of fuels promoted by human‐induced warming.

“Human‐caused warming has already significantly enhanced wildfire activity in California, particularly in the forests of the Sierra Nevada and North Coast, and will likely continue to do so in the coming decades.

Over 6,000 wildfires have been recorded in the state of California in 2019.

Yet despite the urgency of the climate change crisis, the Trump administration notified the United Nations on November 4 that the U.S. is withdrawing from the Paris climate agreement.

The withdrawal will be complete this time next year, after a one-year waiting period has elapsed.

The U.S is the only nation to unilaterally withdraw from the agreement. It was signed in 2015, with the goal of fixing national pledges to reduce greenhouse gas emissions.

“We will continue to work with our global partners to enhance resilience to the impacts of climate change and prepare for and respond to natural disasters,” said Mike Pompeo, U.S Secretary of State, in a statement released to the press on 4 November.

The news came as a global alliance of over 11,000 scientists publicly endorsed research that says the world is facing a climate emergency – according to their data, the month of October was the hottest on record.

Meanwhile, the global wine industry continues to grapple with the effects of drastic climate change.

South Africa is a part of the world all too familiar with global warming; severe drought is becoming a yearly occurrence in the Western Cape.

“It’s the nature of the beast that extreme weather events are becoming the norm. Or rather that the norm is no more and we have to open up our minds to the potential issues thus flattening the bell of our climate curve to include “new’ challenges,” said KWV’s chief viticulturalist Marco Ventrella.

“We have for some time now experienced a drying trend from the west Coast of the Western Cape with significant movement in our Winter: Summer rainfall split favouring more Summer rain yet also resulting in a net reduction versus long term average.

“In fact when one considers the last 6 years of rainfall we see the current drought is actually 6 years in the making. The last 2 years have offered frost damage unseen in many years. It’s all a little wild west to be sure.”