Australian Vintage’s Tempus Two Quartz range was launched exclusively in the UK into Sainsbury’s last month, and following its launch, db caught up with winemaker Andrew Duff about the plan to make more premium wine more accessible, experimenting with new blends, and Australia finding its own style of wines. 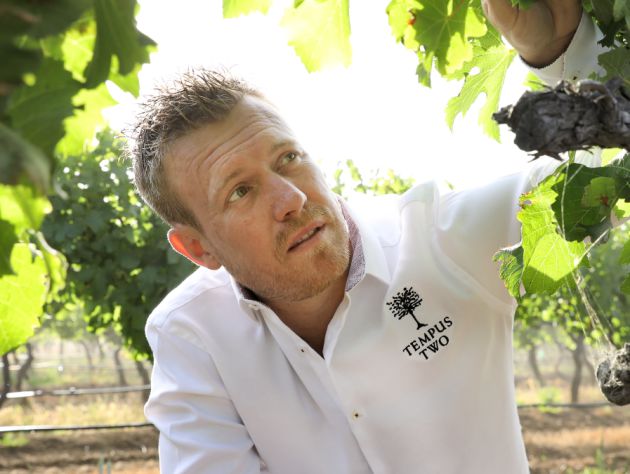 Australian Vintage is building on the premium positioning of its Tempus Two wine range with the launch of a new tier into the UK market. Tempus Two Quartz, which comprises a premium Chardonnay and Shiraz, is using its sophisticated branding and premium style to help consumers spend a bit more on products from a brand they trust.

“We’re focusing on drier style, not over the top in oak, but concentrating on the purity of the fruit”, Duff told the drinks business following the launch. “Millennials are drinking less but making sure they have a great experience when they do. Being able to do a premium wine at £9 is something we’re really happy to do.”

“When we look at consumers in the domestic market, the holy grail is a younger, more affluent conusmer and more female – all of which Tempus Two has captured, which is distinct from the majority of Australian wines,” he told db. “We’re driving that differentiation as a brand builder. It’s different from the norm, the packaging is sophisicttated and high-end and we’re going for a different target market.”

Quartz, he added, was in effect the entry point that would help consumers start to explore the vertical range, and was being supported by in store activity with a pipeline of including at events planned such as Henley Regatta or Polo to further engage with its target consumers.

Founded in 1997 in Hunter Valley by the McGuigan family, Tempus Two is now the fastest growing wine brand in Australia, according to data from IRI, growing by over 140% in the past five years.

Speaking about the range, Duff explained the lack of winemaking tradition of the wine team behind Tempus Two, as well as his own viticulture training in New Zealand, had been a boon to building the brand as it allowed them to approach the wines with far greater freedom, and a more experimental attitude.

“The reason I love Tempus Two is that it is more entrepreneurial,” Dufff explained. “We’re new school, not tied to tradition or a family of traditional techniques, so we get to play around more.”

This, he said included embracing techniques such as extended maceration over 380 days, work on the lees, thermos vinification of the red wines and trying different types of wood ageing such as acacia, cherry wood and different oaks, and experimenting to manipulate wild fermentation.

The aim, he said was not to ‘overplay’ the wines, as Australia had been prone to do, with grapes left on the vine too long and heavy use of oak, but to let the oak “harmonise” rather than dominate.

Australia, he said, was starting to rediscover its way after losing direction.

“In the past, [Australian winemaking] was directed by some of the giants of world wine reviews. Parker, for example loved those big heavy Shiraz styles and as soon as a few wineries got 99 and 100 points, people emulated that style and we lost direction, making wines to review, not wines that suit the area,” he said. “But rather than chase that style, the winemakers are letting the fruit speak, we’d lost sight of that.”

One of the most exciting development he noted, was the new blends that winemakers are putting together, incorporating varieties such as Camenere, Sangiovese and Montepulciano, as well as Tempranillo alongside more traditional Australian staples.

He said that although the consumer, particularly in the UK which is a more varietal led market, wasn’t quite ready for this, it would happen.

“Once those Shiraz-dominated blends start coming through, people will explore more,” he said. “Nebbiolo hasn’t yet broken (you’re left with lower colour levels that the consumers is not ready for) but Sangiovese is going well.”

Some of the more unusual blends Duff is most proud of include Tempus Two’s Shiraz Tempranillo rose, and an unusual Tempus Two Uno Shiraz Pinot Noir blend – a blend of 80% Shiraz and 20% Pinot Noir, which he says is reminiscent of an early blend, the ‘Hunter River Burgundy” that went into hiding in the 80s but the superb vintages of 2014, 2017, 2018 and 2019 have surprised and “won over” wine critics.