“Whiskey-webs” left behind when American whiskeys evaporate could help Scotch producers protect against counterfeiting, according to new research. 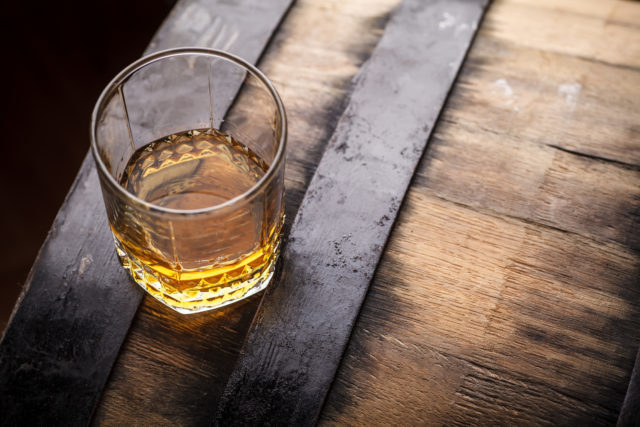 American whiskeys leave behind a web-like “fingerprint” when they evaporate, setting them apart from Scotch, Irish whiskey and moonshine.

That’s according to a new study from researchers at the University of Louisville in Kentucky, which found that the unique reaction American whiskey undergoes when it is aged could help producers spot illegal fakes.

The study published in Physical Review Fluids, part of the American Physical Society (APS), found that the residue American whiskeys leave once evaporated is significantly different to that of Scotch, and the scientists believe this comes from the nature of the maturation process.

Whisky typically acquires its flavour while it ages in mature barrels, while American whiskeys, such as bourbon, are often aged in new, charred-oak barrels. Stuart Williams, the researcher who led the study, said that “whiskeys that mature in such containers extract more water-insoluble contents compared to those matured in uncharred barrels for the same amount of time.”

Matteo Rini, writing in Physics, said that “understanding what this means at the chemical level could help with spotting illegal counterfeits and suggest faster alternatives to traditional ageing.”

It follows on from a study carried out on Scotch residue in 2016, in which colleagues tested the evaporation of drops with different liquor concentrations. Just as with Scotch, the researchers found that when liquid that contains colloids, such as whiskey, is evaporated, the suspended particles can deposit on the surface in a “coffee-ring” pattern.

Stuart Williams, the researcher who led the study, found that the inherent chemical properties of a Scotch whiskey (Glenlivet, UK) enabled a “uniform deposition of colloids.”

When it came to American whiskeys aged in charred oak barrels, a uniform film is generated by American whiskey with an alcohol-by-volume (ABV) greater than 35% and that coffee-ring patterns developed for low ABV (10%).

“However, an unexpected weblike structure formed at intermediate ABV (20%).”

Whiskey webs formed for a variety of American whiskeys, but not for distillates, indicating that the charred new oak barrel and maturation conditions play a “significant role” in the formation of these webs.

The study also found that, of the 66 whiskeys that were examined, each pattern had its own unique, reproducible “fingerprint”.