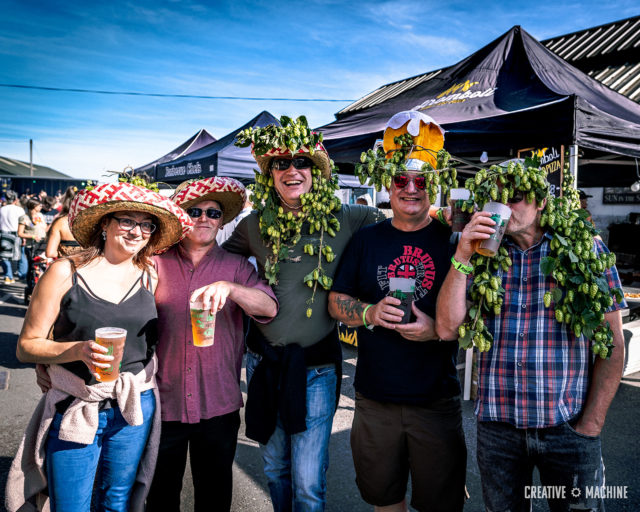 Hogs Back Brewery, based near Farnham, hosted its annual Hop Harvest Party on Saturday (14 September), with a record 2,000 guests at the brewery to enjoy the sunshine, beer, live music, dray horse rides and street food. 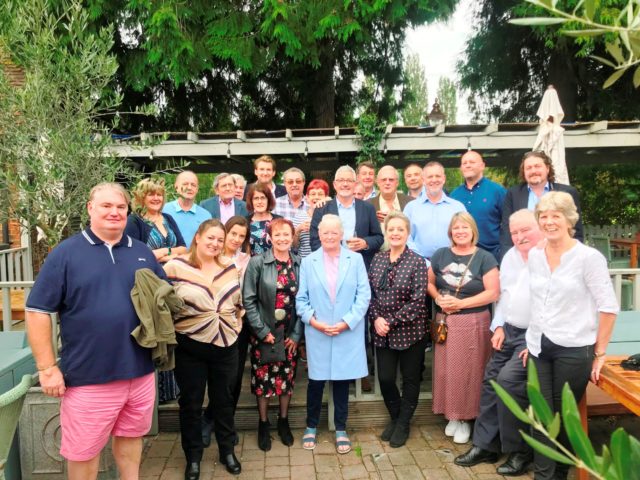 In more brewery news, Henley brewer and pub operator Brakspear invited 11 licensees over for lunch at the Little Angel in Remenham, Henley to celebrate almost 300 years of business together between them.

The lunch was meant for members of its ‘Decade Club’ of landlords, landladies and head office staff with at least 10 years’ service.

In total, the 25 guests attending, including Brakspear’s chief executive Tom Davies and chairman Michael Daviesm have racked up an impressive 294 years’ service with Brakspear.

In celebrity wines, db took the train to Kent on Tuesday to watch as local winery Hush Heath Estate prepared a new still rosé wine, produced in partnership with former cricketer Ian Botham, for a listing in UK retailer Tesco.

The rosé is the first to gain a major national listing under the new Botham & Balfour brand, which – which we revealed earlier this year in July

Meanwhile in London, over eighty women working in the UK wine trade attended an event celebrating leadership at Vintners’ Hall.

Organised by London-based networking group Women in Wine LDN, the event brought together key industry figures, including Diana Rollan, Beverage Director of D&D Group, Serena Sutcliffe MW of Sotheby’s, to celebrate and discuss the past, present and future of leadership in the wine industry. 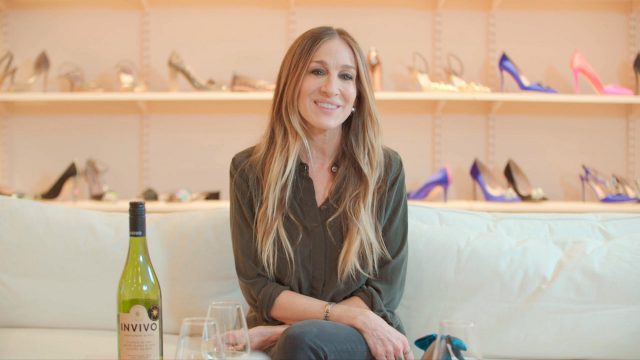 Speaking of women in wine, Sex in the City star and entrepreneur Sarah Jessica Parker is the latest woman to enter the industry, launching her Invivo X wine label at a garden party in New York on Wednesday night.

Addressing the crowd of A-listers, the other Parker said she hadn’t even thought of launching a wine brand before until she was approached by Tim Lightbourne and Rob Cameron of New Zealand-based producer Invivo, who have partnered with her on the project.

“I knew very little about the industry, but we were happy drinkers of wine. It has been a joyful, informative experience. I couldn’t be more proud of this.”

Also in celebrity drinks, Michael Jordan and four other NBA stars have joined forces to launch a super-premium Tequila label. 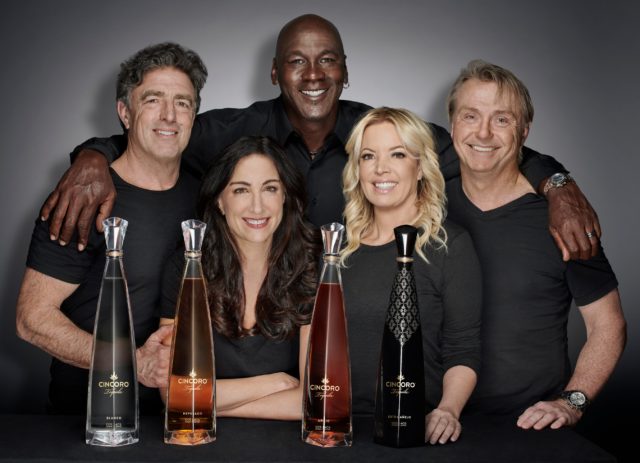 The story goes that Jordan met with Jeanie Buss of the Los Angeles Lakers, Wes Edens of the Milwaukee Bucks, and Emilia Fazzalari and Wyc Grousbeck of the Boston Celtics for dinner in 2016, and after “sharing stories and discovering a mutual love of tequila,” they decided to go into business together to develop their own label. 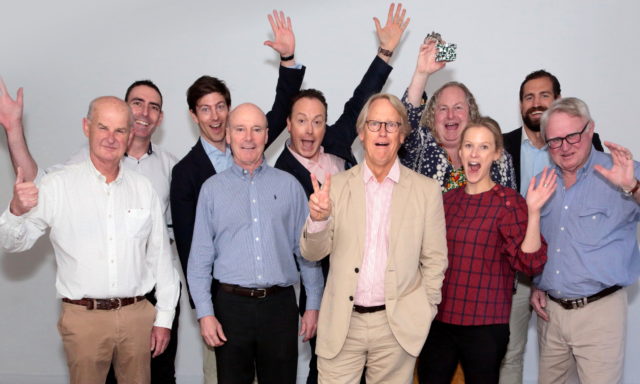 The great and good of the Aussie wine trade jetted in to a gorgeously sunny London this week for the Australia Redefined tasting put on by Wine Australia in the OXO Tower, which included a masterclass hosted by Australia’s First Families of Wine. 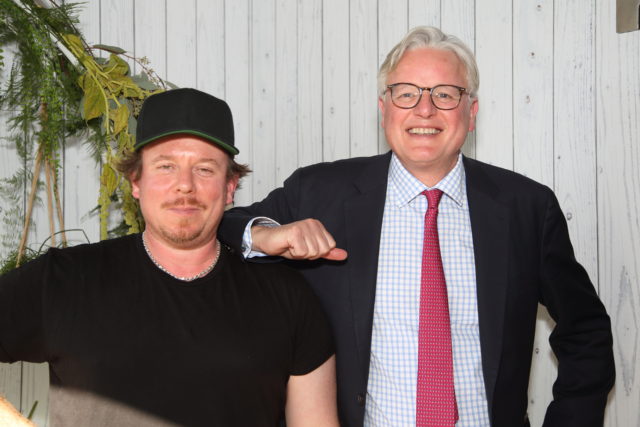 The tasting also included an insightful masterclass on the future icons of Australian wine hosted by renegade wine writer Mike Bennie (left) and Langton’s co-founder Andrew Caillard MW, who both praised the promise of Grenache. 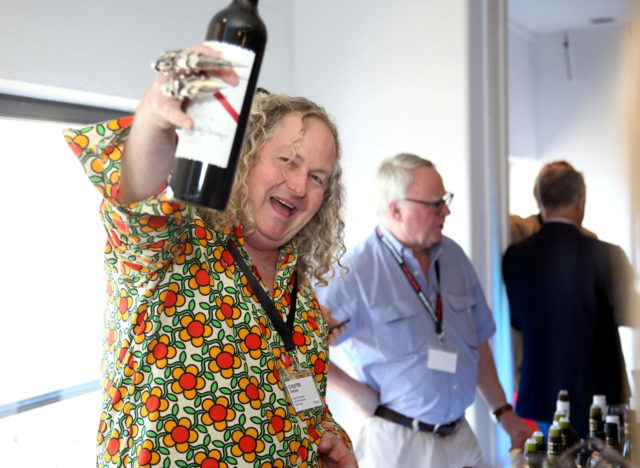 Chester Osborn of d’Arenberg didn’t disappoint with a new addition to his loud shirt collection – a floral ensemble this time around, worn with some impressive, claw-like jewellery. We wonder if he had problems getting through airport security… 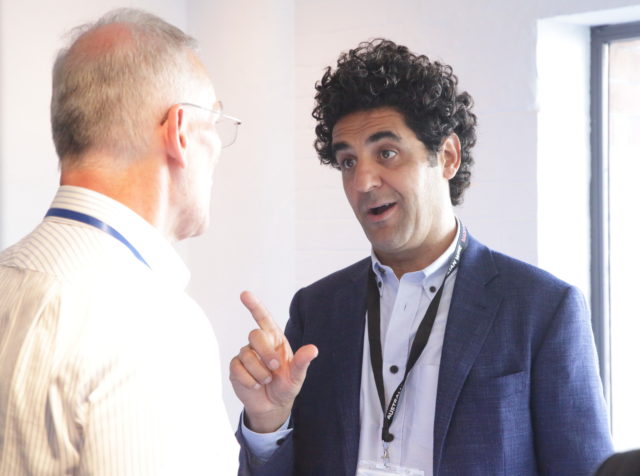 Also in attendance was the ever cherubic Larry Cherubino, who looks like he’s telling off Waitrose’s Nick Room in this pic… 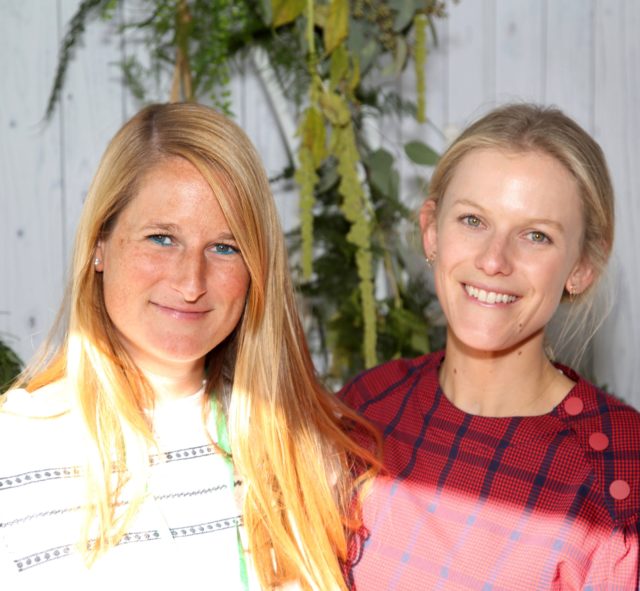 db’s editor, Lucy Shaw, got the chance to catch up with the lovely Jess Hill-Smith, who recently made the move from London back to her homeland and family winery, Yalumba. 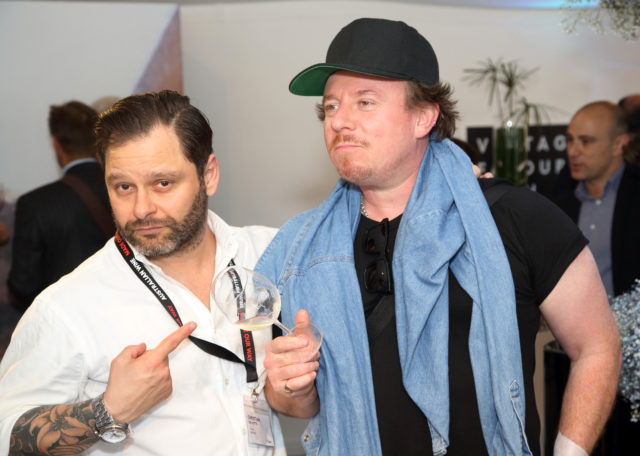 The aforementioned Mike Bennie mooched around the room with his signature swagger – what a rock star. 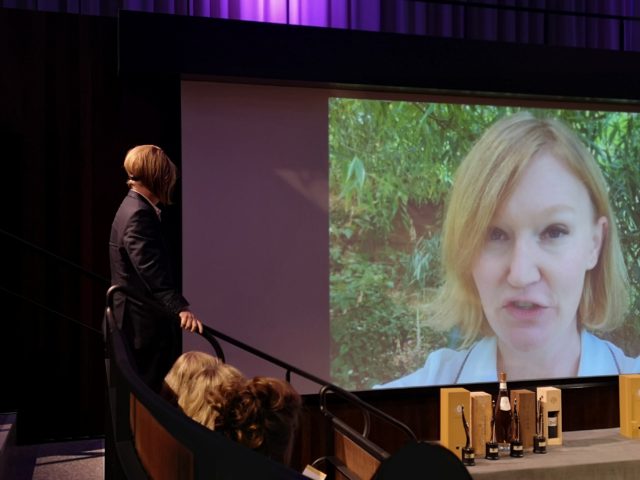 This week also saw the announcement of the winners of the 2019 Louis Roederer International Wine Writers’ Awards, which took place in an old medical lecture theatre inside the Royal Academy of Arts in Piccadilly. American wine writer Kelli White, winner of the online communicator of the year award, was unable to attend the ceremony and asked UK-based wine scribe Francis Percival to collect the award in her place. 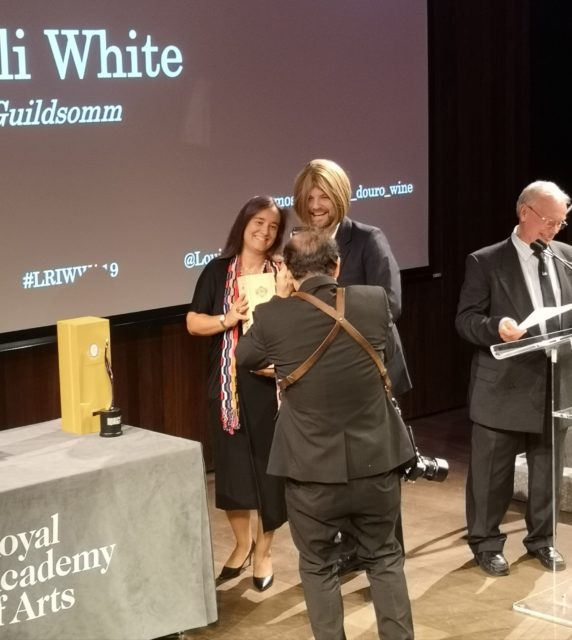 Taking his role very seriously, Francis donned a strawberry blonde wig for the occasion but stopped short of an Oscars-like acceptance speech. 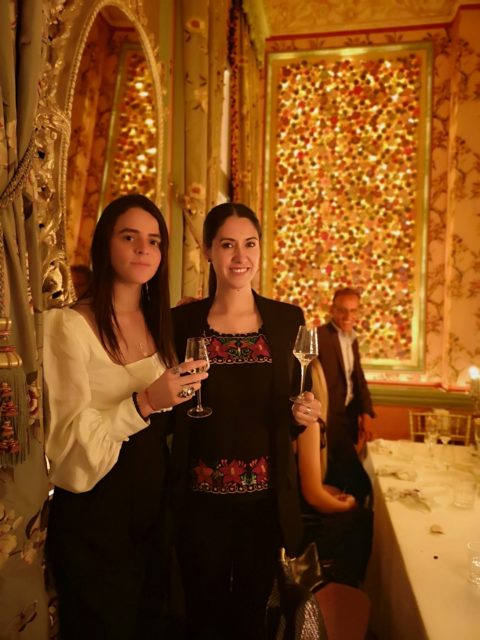 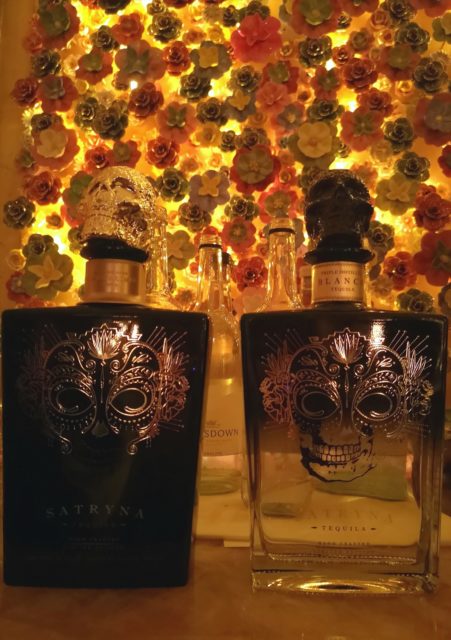 The small batch brand is named in honour of ‘La Catrina’, a female skeleton wearing a wide-brimmed hat who is one of the most recognisable symbols of the Mexican Day of the Dead festival. The Satryna range includes two expressions – a blanco and a cristalino, which is aged in oak then filtered through charcoal to remove the colour imparted by the wood. 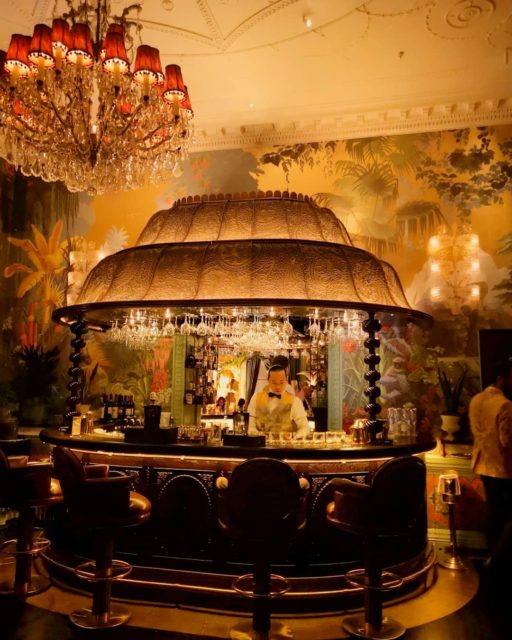 While at Annabel’s, Lucy took the opportunity to explore the club’s opulent surroundings following a pricey makeover. 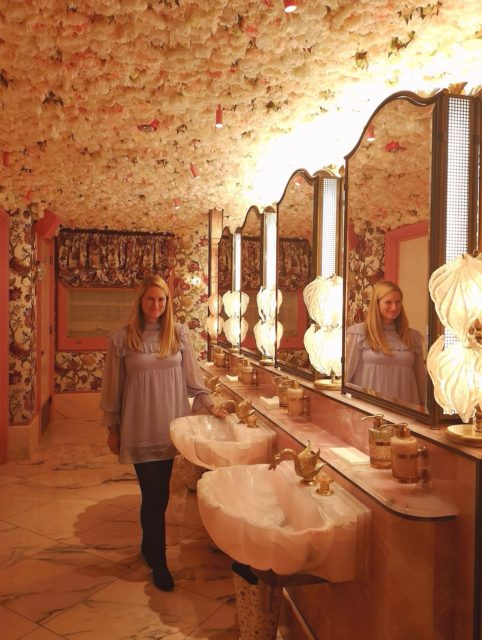 Among the most magnificent rooms is the ladies loo, featuring scallop shell pink marble sinks and hundreds of peonies hanging from the ceiling. 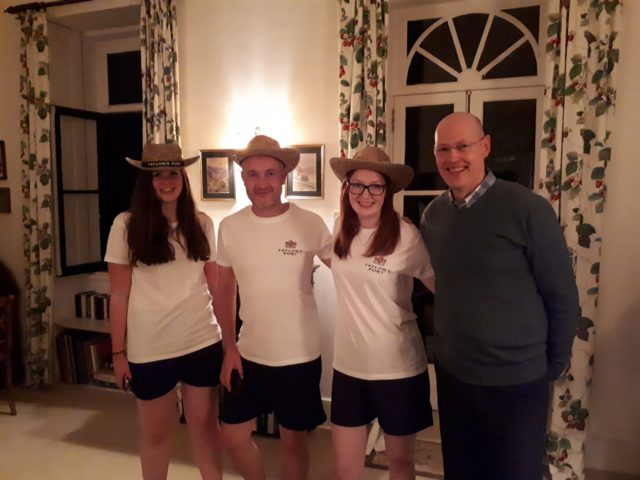 Meanwhile db‘s Phoebe French headed to the Douro in time to take part in the grape treading at Taylor’s Port-owned Quinta de Vargellas. Duly kitted out, Phoebe, David Kermode (Vinosaurus and The Buyer), Anna Woodbridge (Mentzendorff) and Tom Cannavan (Wine Pages) lowered themselves into a lagare for a late night grape stomp. 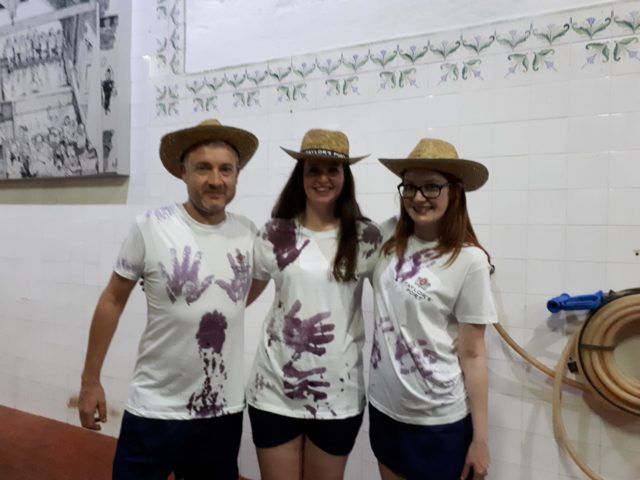 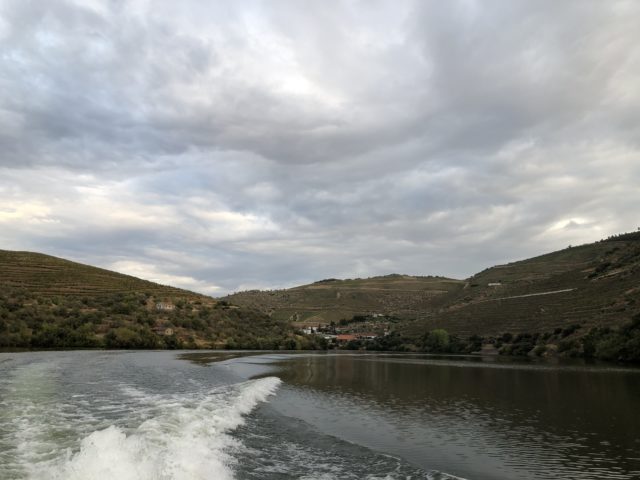 After sampling Port and Tonics with freshly-roasted almonds on boat trip up the Douro river, the group returned to a warm welcome from golden lab pup Saffy. 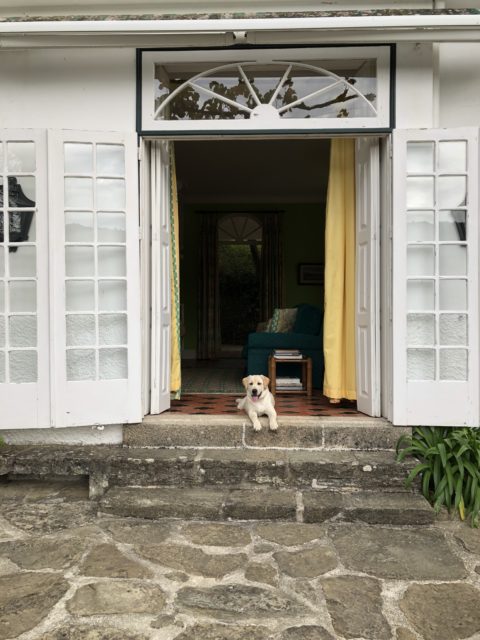 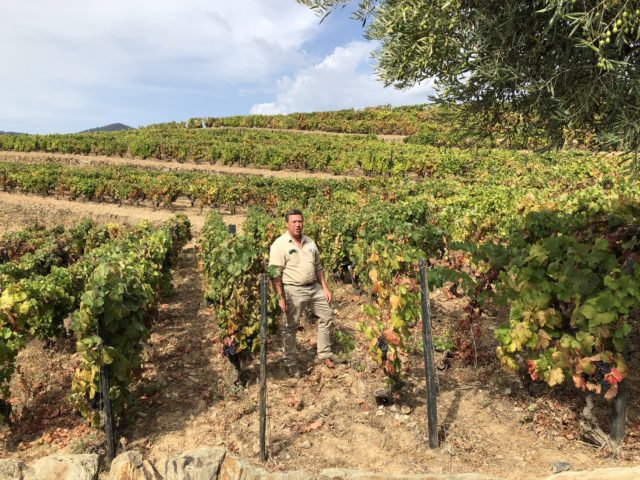 On the second day, the group visited Quinta da Roêda and were marched around the vineyards by Fladgate head winemaker David Guimaraens who explained the evolution that has taken place in the vineyards over the last 40 years. 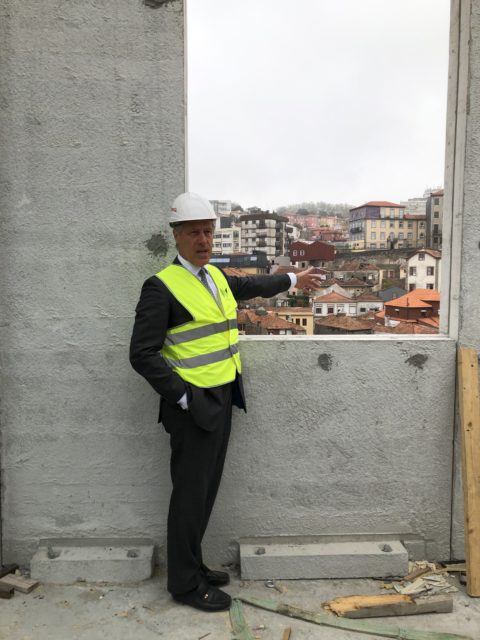 Travelling down river to Porto, Fladgate CEO Adrian Bridge gave a whistle stop tour of what will become the group’s €100 million tourist attraction World of Wine, which is set to open in July next year. 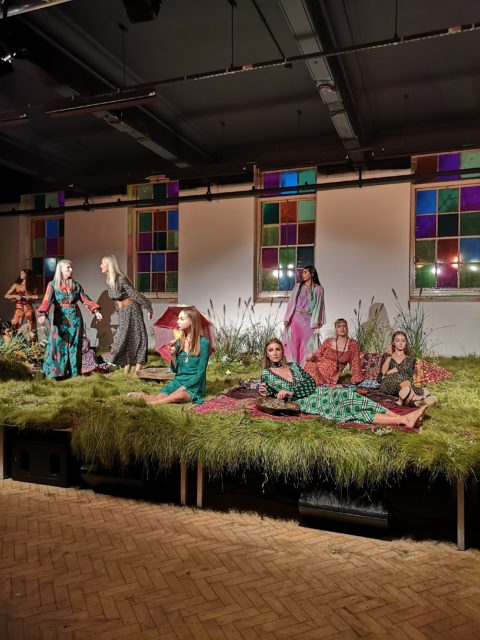 On Saturday, AIX Rosé sponsored Rixo’s London Fashion week event in Chelsea, as exclusive wine sponsor. It was a fantastic afternoon and evening with over 400 fashionistas and major influencers coming through the doors. Rixo was promoting its spring/summer collection, inspired by 1960s Woodstock – think florals and swirls! 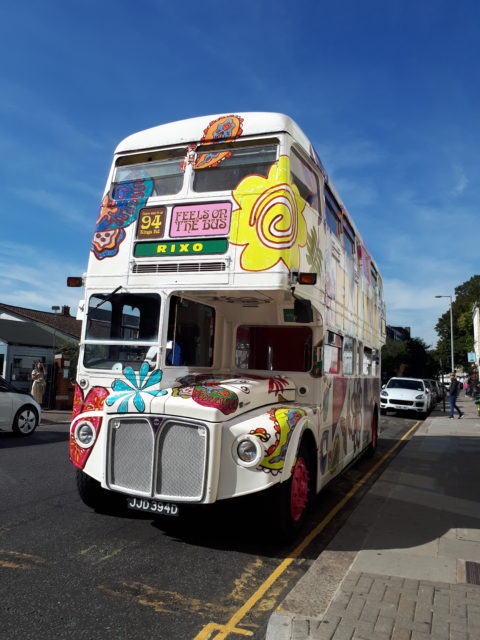 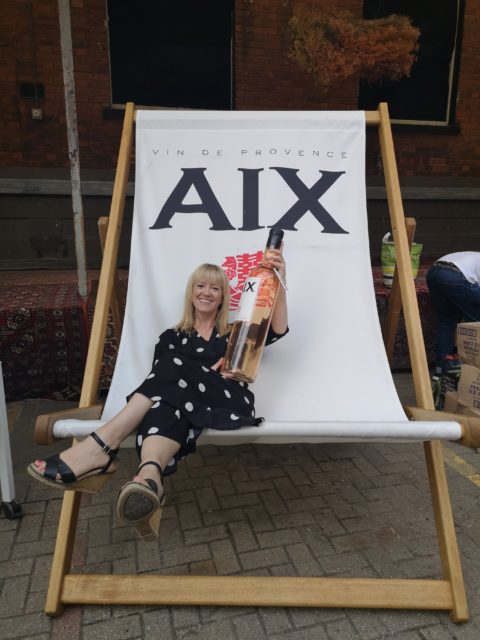 The 15-litre bottle of Aix served from the Vcanter and the large Aix deckchair proved popular, here modelled by Claire Scott Gall, director of European Wines at Mentzendorff.

It was held as part of New Zealand Organic Wine Week, which is taking place from 17-23 September.

Tastings and masterclasses have been taking place across the world this week to promote NZ’s organic wine production, a masterclass in San Francisco as well as various events across NZ showcasing the nation’s organic and biodynamic producers to consumers and the trade. 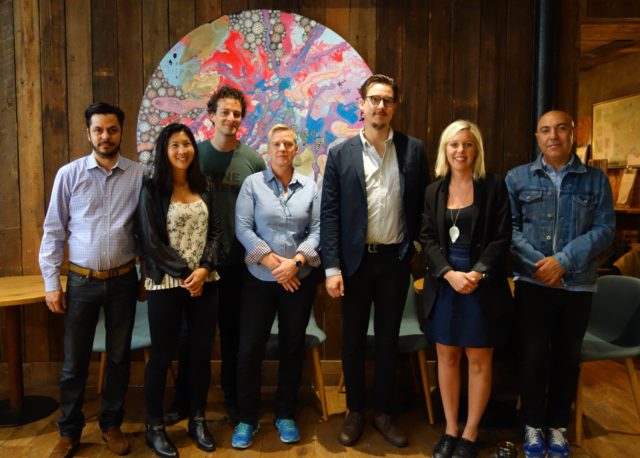 This week, professionals from across the industry gathered at Humble Grape to taste a selection of unrepresented German wines and to choose the producers who would be invited to exhibit at this year’s Get It On tasting. Carlos Blanco (Blanco & Gomez), Miranda Fong (Graft Wine), Nic Rizzi (Modal Wines), Andrea Bulcock (ABS Wine Agencies), Bert Blaize (St Leonards, Brunswick House and Orsay), Kirsten Willis (Laithwaite’s Wine) and Vahagn Voskerchyan (Amathus Soho) sampled a selection of wines from producers looking for representation in the UK.

The successful wines will be showcased at the Get It On tasting on 5 November at Moonchu Hall in Chinatown.